Let's round off this run of posts on cult crime fiction author Donald E. Westlake's early-'60s science fiction magazine short stories with a flourish: a tale from 1961 which is actually the cover story of the issue in which it appears: 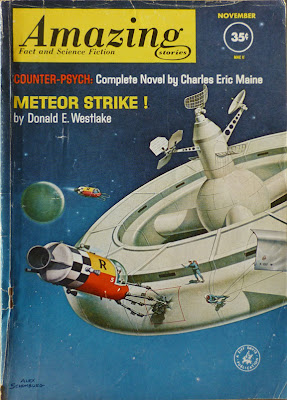 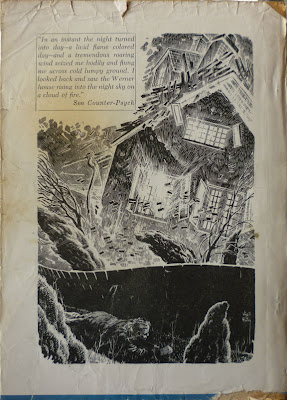 Amazing Stories Vol. 35, No. 11 was published in the States by Ziff-Davis in November 1961. Westlake's story in this issue is longer than the others I've been blogging about this week; at over thirty pages it's identified as a novelet in the issue's table of contents: 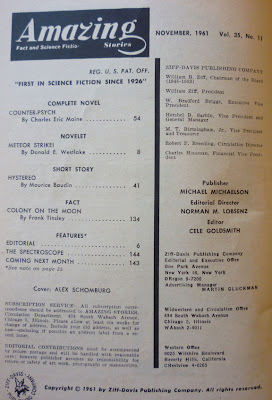 And unlike most of Westlake's SF magazine stories from this period, it's afforded the rare honour of cover feature status, with the great Alex Schomburg painting a scene from it on the front. But Westlake's artistic good fortune with this issue doesn't end there. Virgil Finlay – whose beautiful, swishing, stippled drawing I blogged about in this post and this post (and one of whose illustrations for Charles Eric Maine's "Counter-Psych" novella from this very issue of Amazing can be seen on the back cover above) – provides the artwork for Westlake's tale in the interior – a tale that's one of the least whimsical of Westlake's SF efforts around this time, and one that has never been reprinted since. 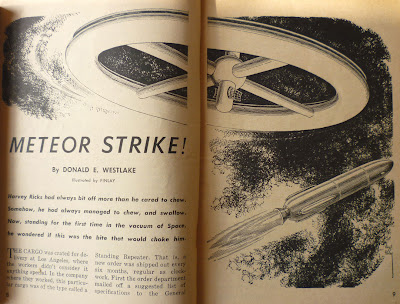 "Meteor Strike!" is a third-person account of a mission to transport seven aluminum crates from Earth to a maintenance satellite orbiting the Moon, a trip that, according to the exacting detail Westlake includes in the story, takes well over a month in five stages. The cargo is being overseen by Glenn Blair, tough, big-boned, mid-thirties Chief Cargomaster for General Transits, Ltd. But Blair and his men only manage to get the crates as far as Station One, the space platform orbiting Earth, before the mission is derailed: a meteor crashes into Section Five of the station – and Section Five just happens to be where Blair's cargo is being stowed ahead of the next stage of its journey. Thus Blair and his co-workers volunteer to undertake a dangerous spacewalk in order to fix the hole in the station wall and save their precious cargo. 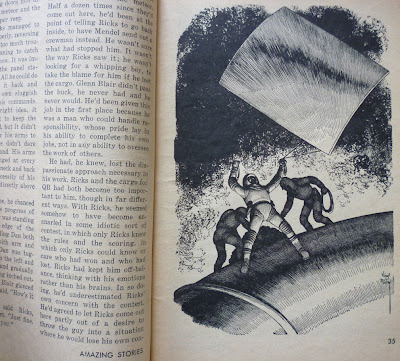 Whereas the preceding Westlake SF stories I've blogged about all foreshadowed the author's more comedic caper novels – to a greater or lesser degree – "Meteor Strike!" has more in common with the distinctly unfunny Parker novels Westlake would soon be writing as Richard Stark. It's not as grim, nor as violent, but in its prosaic approach to its subject matter and sober stabs at a feasible near-future, it strives for a factual depiction of space exploration that chimes with the Parker series' matter-of-fact presentation of crime. Certainly the way it describes in depth the process of shipping cargo, of men doing their jobs to the best of their abilities, presages Westlake/Stark's methodical detailing of the heists in the Parker novels, notably in The Man with the Getaway Face (1963). Mind you, he still can't resist rounding the story off with an ironic payoff, as we learn what exactly's contained in those crates that makes them so valuable. Although if you know anything about Westlake, those contents will bring a wry smile to your face.

And that's it for Westlake science fiction stories for a while. I've got a bunch more SF magazines from 1962 and '63 which contain Westlake stories, so I'll be writing about those at some point, and I have a copy of Ed McBain's Mystery Book mag from 1961 which includes a non-SF Westlake piece – indeed a non-fiction Westlake piece. That's all for the future, but before we leave the magazines for a while and return to some books proper, as a kind of transitional post – and mirroring the post that began this particular SF run – I've got one last SF mag to show you: a 1962 issue of Science Fiction Adventures which boasts the first draft of perhaps J. G. Ballard's most famous science fiction novel.