After that Donald E. Westlake addendum yesterday, let's have a quick look at one last '60s science fiction magazine before we get back to the books. Although the lead story in this particular magazine would, within months, go on to become a book... 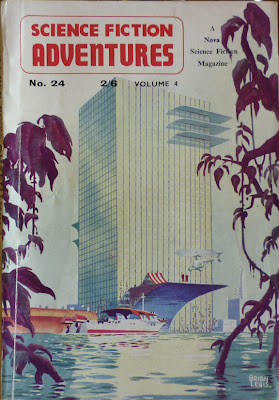 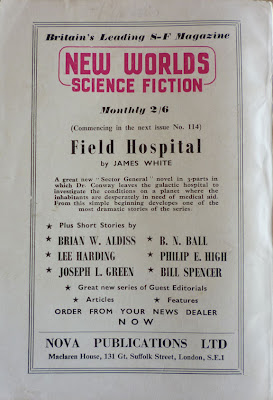 Science Fiction Adventures Vol. 4, No. 24 was published by Nova Publications in January/February of 1962. As you can see from the table of contents: 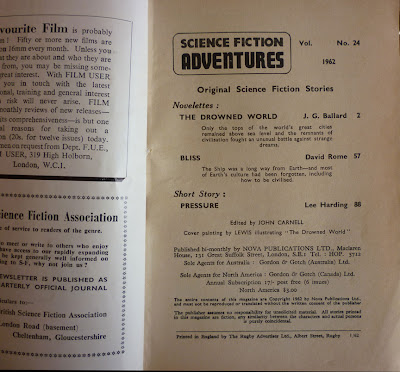 the line-up of stories is limited to just two novelettes and a short. Two of the writers of those stories – Australians David Rome (real name David William Boutland) and Lee Harding – probably won't be terribly well known to most folk. But the third author most definitely will – as will, more than likely, his story, which is the issue's (untitled) cover feature, as painted by Brian Lewis.

The Drowned World was J. G. Ballard's second novel. It's a post-apocalyptic tale set in a world where the polar ice-caps have melted, submerging the cities of Europe and North America in lagoons. It was published in hardback by Gollancz – under one of that publisher's famed yellow dustjackets, seen above – in 1962... but that wasn't the first appearance of the story. Because the truncated novelette version which appeared in the January/February 1962 issue of Science Fiction Adventures actually predates the expanded novel by some months. So this: 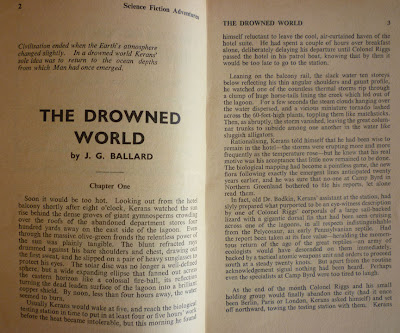 is, in effect, the true first edition of The Drowned World.

I bought my copy of Science Fiction Adventures on eBay; I've got no idea how much it's really worth – I can't find any listings for it on AbeBooks or Amazon – but it's certainly scarce. And since a first edition/first impression of the Gollancz hardback would set me back around £1,500, it'll do me fine – even if the story is abbreviated.

And that really is it for the magazines for a while, although the next post will still be on a science fiction tip. But it'll also be on a movie tip – as will subsequent posts, as I take a look at a bunch of books that all gave rise to rather famous film adaptations...
Posted by Nick Jones (Louis XIV, the Sun King) at 05:25