UPDATED: When is the Punisher Not the Punisher? Frank Castle, The Violent Hours (Herbert Jenkins, 1966)

It's the final post in this short series on obscure thrillers I've bought over the past few months but am only just now getting round to blogging about. And today's book is a UK printing of an American crime thriller originally issued as a paperback by Gold Medal ten years prior to this edition: 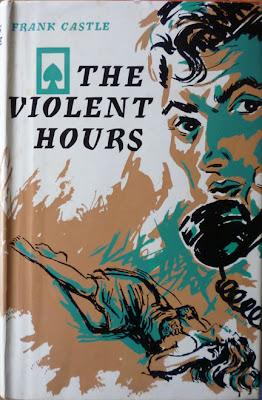 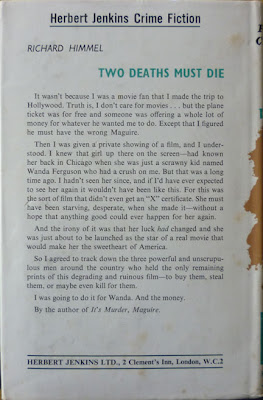 Frank Castle's The Violent Hours was published in hardback in the UK by Herbert Jenkins in 1966. It's about... well, let's turn to the dustjacket flap blurb to determine that, where a no-doubt overworked and underpaid British copywriter makes a brave stab at a pseudo-noir description:

It was half past murder by Webb Grayburn's watch—and time to see how much of a man he was. It began with the finding of the first body in the darkened balcony of a fourth-rate movie house, the body of a man with his head crushed in.

The second body was that of Suzie, the girl Webb loved.

Kellner had done this; and now Kellner, his mortal enemy, was somewhere in the streets of Los Angeles on a terrible new mission of his own. It was time for Webb Grayburn to get out there and find him...

Y'know, I've often thought it would be quite exciting to have a mortal enemy. Might liven up the odd dull Sunday afternoon. Also: half past murder? So... that would be after dietime, but before breakneck, right? And furthermore: a fourth rate movie house? Crikey, that must be a really bad cinema. Like a Cineworld or something.

You may, at this point, be wondering why on earth I bought this particular book (from the legendary Maurice at Zardoz Books, no less). After all, it's an incredibly obscure – and more than likely pretty terrible – novel by a writer who hardly anyone's ever heard of, plus it's a British edition published ten years after the American one. Well to answer that, we'll have to cast our minds back to this post on Peter Rabe's My Lovely Executioner, which was similarly published by Herbert Jenkins in the UK some years after the US Gold Medal paperback (1967 versus 1960 in that instance). On that book, the cover artist, a certain "Phillips" (I still haven't been able to turn up any further info about him), had basically knocked up a quick sketch of the original Gold Medal cover: 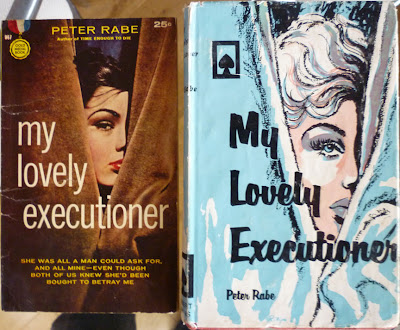 That got me wondering if the mysterious Mr. Phillips had done any other covers for Herbert Jenkins – who picked up the UK rights for many pulpy US paperbacks, issuing them in hardback instead – around the same period, and if he had, whether he'd adopted a similar copycat approach. So I nabbed The Violent Hours for a few quid from Zardoz Books, and sure enough the dustjacket is again by Phillips. And while on this one he didn't copy the 1956 Gold Medal cover – which was painted by Lu Kimmel – he did take one cue from it:

Namely the broad reclining on the bed, drawn from a different angle on the Jenkins cover. So that's why I bought the book – well, that and the fact it was written by Frank Castle, which tickled me, as that's also the civilian name of Marvel's ultra-violent vigilante the Punisher. I'm not, however, the first person to point that out: this Pulpetti post and this Mystery File one from over three years ago both mention it too, as well as rounding up as much as anyone seems to know about Mr. Castle, which is to say, not much at all.

All in all, then, and taking everything into consideration, this has to rank as one of my more absurd and pointless book purchases, one for which – as I've amply demonstrated, I feel – I can offer little in the way of justification or defence.

Still, at least I got a blog post out of it.

Right. What have I got for you next week? Well my friends, that all depends on an event on Saturday that's become a highlight of my book collecting calendar (not that I even have a book collecting calendar, physical or otherwise). Yes, tomorrow it's the Lewes Book Fair, and if that happens to offer up a decent selection of secondhand books, then I'll be blogging about those – as well as the fair itself – in short order. But if it doesn't, I'll probably have something of a Mark Billingham bonanza instead, with posts on the first two Tom Thorne novels and how they compare to the Thorne TV show, as well as some Lewes and Brighton Billingham Book Bargains. We'll see what the weekend brings...

UPDATE 20/3: As it turned out, the Lewes Book Fair was something of a disappointment. I picked up a couple of books and saw a few others that I managed to resist, including a signed US first of Richard Stark's Comeback, which I might have bought if I didn't already own a US first of it and had it not been twenty-five quid. But it wasn't one of the better fairs from my perspective: what there was in the way of fiction wasn't exactly keenly priced, and as a consequence almost all of it was still sitting on tables towards the end of the day. If the sellers had knocked a tenner or so off some of their wares I might have been more interested, but I saw little that couldn't be found cheaper online.

So, looks like next week will indeed be dedicated pretty much exclusively to Mark Billingham...
Posted by Nick Jones (Louis XIV, the Sun King) at 07:56