For the second in this short series of posts on obscure thrillers I've picked up over the past few months, we have this: 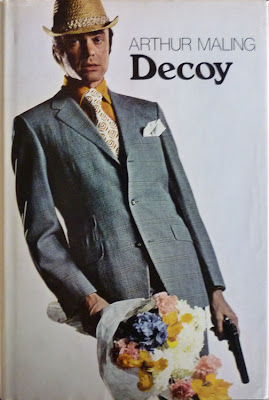 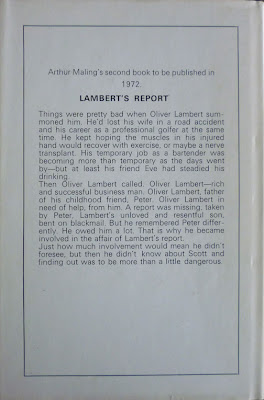 A UK hardback first edition of Arthur Maling's Decoy, published by Michael Joseph in 1971 (originally published in the States by Harper & Row in 1969) and bought in Colin Page Antiquarian Books in Brighton for a few quid. Maling published fifteen novels over a near-twenty year period, the last being 1988's Lover and Thief. Decoy was his debut; its protagonist/narrator is, according to the jacket flap blurb, a sciatica-suffering "home town boy" who agrees to deliver some papers for his half-brother to Mexico. On the plane he meets a girl with influential Mexican friends, and before too long the corpses start piling up and the US Treasury Department gets involved.

There's little info about Maling online; this link notes that he was for a short while a reporter on the San Diego Journal, and that 1979's The Rheingold Route won the Edgar that year for Best Mystery Novel. When Decoy was published Maling was still vice-president of family business Maling Bros. Inc, "a chain of forty-two shoe shops in the American Midwest," according to the author bio on the jacket back flap of the Michael Joseph edition. It continues: "He began writing Decoy while recovering from an attack of rheumatoid arthritis which gave him the idea for the narrator's problem at the beginning of the book. He continued with it early in the morning before going to work [er, just the one morning...?] and on two short holidays, one spent in Acapulco checking background for the climax of the book." Uh-huh, I see: "research", then, was it...?

The dustjacket sports a photo by a particular favourite of Existential Ennui's, Beverley le Barrow (spelt in this instance Beverly – no third "e" – le Barrow), a.k.a. Sun newspaper Page 3 girl snapper Beverley Goodway. I summarized everything I know about Beverley's parallel career moonlighting as a book cover photographer in this recent post on Oliver Bleeck's The Highbinders, so there's little to gain from going over all that again; pop along and read that post if you're interested. But I will say here that, compared to some of his, ah, cruder cover photos, his one for Decoy is actually quite stylish, and wouldn't look out of place on, say, a Suede album cover. It's also the earliest example of a dustjacket by him I've yet come across.

Anyway. Onwards. And next up I have for you a British edition of a very obscure American crime thriller, written by a man perhaps better known as the Punisher. Well, kind of...
Posted by Nick Jones (Louis XIV, the Sun King) at 05:58