One Good Turn by Kate Atkinson (Doubleday): A Signed First Edition and a Short Review Thereof 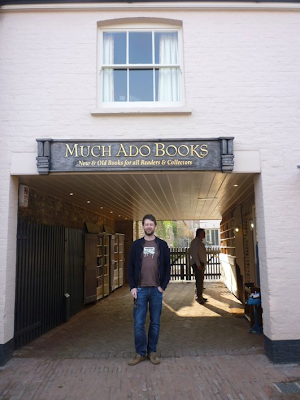 Aaaand I'm back. Slightly longer gap than planned there: unfortunately I had something of a family medical emergency to deal with over the weekend, so blogging had to take a back seat. But I did manage to have a thoroughly pleasant day out for my birthday on Friday before the crisis erupted, during which I visited a couple of my favourite secondhand bookshops – Camilla's in Eastbourne and Much Ado Books in Alfriston (plus sundry charity shops) – and ended up with a stack of novels by, among others, Adam Hall, Anthony Price and Gavin Lyall. Plus I got to scoff a massive cream tea in Alfriston: 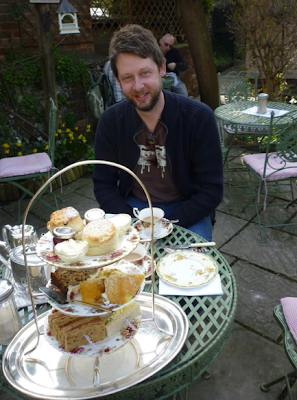 Yum. So it hasn't all been doom and gloom (and, fingers crossed, the medical emergency has been resolved too). I'll be blogging about the books I bought down the line sometime, but so far as the rest of this week goes, all being well I'll have a few (unrelated) posts on literary crime writer Kate Atkinson and science fiction author James Blish. Starting with this: 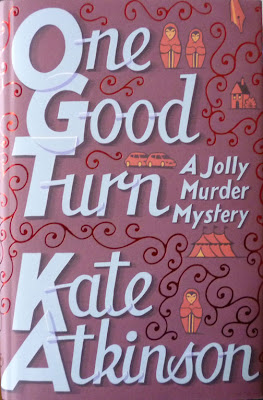 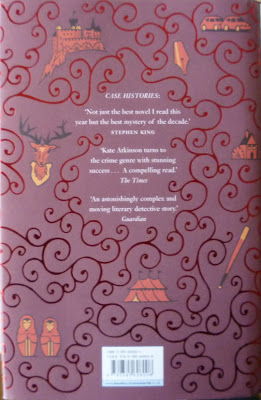 A UK hardback first edition/first printing of Kate Atkinson's One Good Turn, published by Doubleday in 2006 with a dustjacket illustration by Neil Gower and jacket design by Gavin Morris (Gower and Morris have worked together on a number of book covers – and in fact Mr. Gower lives and works in the same East Sussex town as me, Lewes, and often designs the covers for local listings mag Viva Lewes). Ah, but this isn't just any first edition: 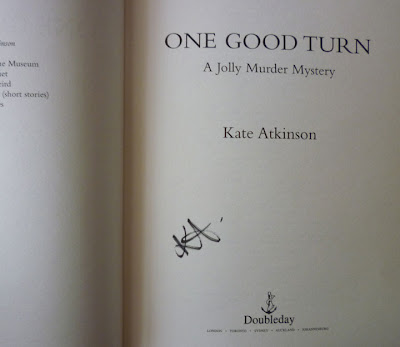 Because it's also signed, although in this instance not with a full signature but with Atkinson's initials, something I believe she's known for. I won this on eBay for not too much money at all, and read it in pretty short order thereafter; I loved Case Histories, the first in Atkinson's series of novels featuring misery guts middle-aged private investigator Jackson Brodie, so I devoured One Good Turn – which is the second book in the series – almost as soon as I got it.

Much as she did in Case Histories, Atkinson once again presents us with a number of seemingly unrelated narratives, all of which gradually intertwine, with Jackson at the heart of them. The backdrop is the Edinburgh Festival, to which Jackson's partner, Julia (with whom he became involved in Case Histories), has dragged the reluctant Mr. Brodie because she's starring in a fringe theatre production. For his part Jackson has nothing better to do, having inherited two million quid at the end of the previous book and retired from the P.I. business to live in a house in the foothills of the French Pyrenees. Naturally he's now bored shitless, so when the dots begin to join between a road rage incident and a dead Russian girl, Jackson can't resist sticking his oar in.

It's those delicious coincidences and connections that make Atkinson's novels so special, but they wouldn't be quite so fascinating if the characters weren't so brilliantly drawn. Each chapter in One Good Turn is told from the perspective of, variously, a sad sack pseudonymous writer, a housewife with a newly comatose and hospitalized husband who's being investigated by the Specialist Fraud Unit, a single mum policewoman and Jackson himself, but in a sense it doesn't really matter whose head Atkinson has clambered inside: in her hands, even the most minor characters become utterly compelling.

Indeed, it's so enjoyable spending time in each of their companies – following their meandering thought processes, looking on as they're buffeted by events they have little control over – that, as with Case Histories, it's a real shame when the novel has to end. Thankfully, there are still two more Brodie mysteries for me to read – and as luck would have it, right around the same time as I won this copy of One Good Turn on eBay, I happened to find a first edition of the next book in the series in a charity shop in Brighton... a Brighton Book Bargain, if you will...
Posted by Nick Jones (Louis XIV, the Sun King) at 11:39