Lewes Bookshop Bargain: Travels with My Aunt by Graham Greene (Viking US, 1970) 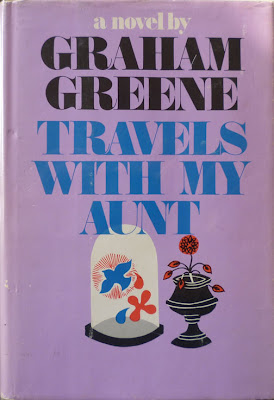 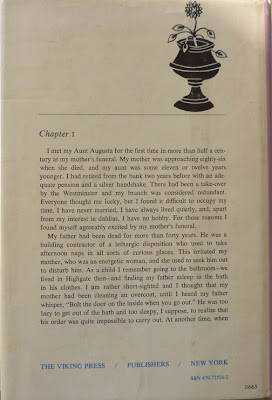 This US hardback first edition/first impression of Travels with My Aunt was published by The Viking Press in 1970, a year after the UK edition. The dustjacket flap copy is actually nicely crafted, so I shall let whichever copywriter it was who penned it summarise the novel for us:

Greeneland has been described often as a land bleak and severe. A whisky priest dies in one village, a self-hunted man lives with lepers in another. But Greeneland has its summer regions, and in the sunlight everything looks a bit different. Here Aunt Augusta travels with her black lover Wordsworth; Curran, the founder of a doggies' church; the C.I.A. man obsessed by statistics and his hippie daughter; and old Mr. Visconti, who has been wanted by Interpol for twenty years. Henry Pulling, a retired bank manager, unexpectedly caught up with them, describes their activities at first with shock and bewilderment and finally with the tenderness of a fellow traveller going their way.

On the Greeneland website Graham Greene is quoted as saying Travels with My Aunt was the only book he wrote "for the fun of it", and that whilst writing it he "had no idea what was going to happen to Henry or Augusta next". He also threw in a number of private jokes that no one other than he would ever get, even using Kingsley Amis's surname for one character.

The dustjacket on this American edition was designed by Abner Graboff, about whom there's an embarrassment of riches online, thanks chiefly to Ward Jenkins and his Ward-O-Matic blog. Back in 2009 Ward decided to find out all he could about Graboff, whose beautiful designs and illustrations graced the covers of books by the aforementioned Kingsley Amis, Ellery Queen, Rex Stout and many others. The result was this introductory post on Graboff's career and a two-part interview – here and here – with Abner's son, Jon, all lavishly illustrated with examples of Abner's work. So click on those links and enjoy the fruits of Ward's labours.

But it's not just Graboff's jacket that makes this edition of Travels with My Aunt so pleasing. As with a lot of American hardback novels, the overall design and finishing is a cut above most British hardbacks. The book is wider than comparable UK novels, has textured lilac endpapers, white and purple headbands, deckled page edges and a cloth- and arlin-covered case with a gold de-bossed "GG" on the front: 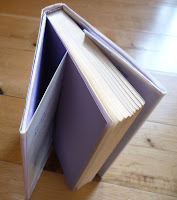 Now, if all this strikes you as filthy slavering book fetishism, well... you're right. But there's also a (slightly) more serious point to be made here, something that Matthew Asprey touched on in a couple of comments on this Elmore Leonard post, which is that, generally speaking, UK book production is inferior to US book production. Matthew wrote two posts on the subject, both of which are worth taking the time to read. In the first one he details the decline of British book production, and in the second one he showcases a British and American edition of the same book, which makes for a fascinating comparison.

One area of book design where us Brits might still have the edge over our American cousins, however, is cover design. Obviously it's an outrageous generalization, but by and large I tend to prefer the jackets of the UK novels I buy to the US ones. Curiously, though, in the case of Graham Greene's novels, the reverse could be said to be true. It's probably a toss-up between the American and Stephen Russ-designed British first edition dustjackets of Travels with My Aunt:

Indeed Abner Graboff's design is almost an homage to Russ's. But if we compare the 1978 US and UK firsts of The Human Factor:

I reckon Janet Halverson's design for the American edition has it over Michael Harvey's one for the British first. Anyway: food for thought.
Posted by Nick Jones (Louis XIV, the Sun King) at 08:04