A First Edition of The Private Sector by Joseph Hone (Hamish Hamilton, 1971), and a Letter from an Editor

Following on from yesterday's review of Jeremy Duns's Free Agent, today's Spy Fiction Fortnight post is on a book I was prompted to track down as a result of a comment left by Jeremy on this Michael Barber essay about Dennis Wheatley. Nothing to do with Wheatley, I should point out; rather it was a British spy fiction author Jeremy mentioned who I'd not come across before: 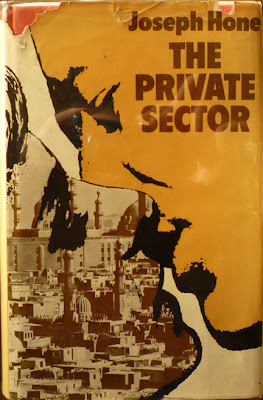 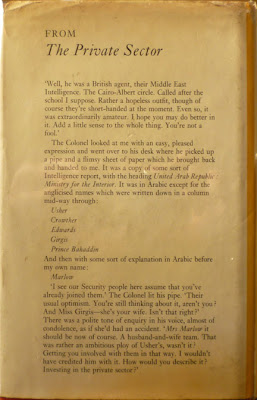 The Private Sector by Joseph Hone was published in hardback by Hamish Hamilton in the UK in 1971. Hone's debut novel, it's an espionage thriller set during the run-up to the Six Day War, which is a period of history I know a little bit about, having read Jeremy Bowen's propulsive account of it (itself written like a high-octane thriller). Switching from first to third person, The Private Sector was the first of four novels to feature MI6 agent Peter Marlow, and was followed by The Sixth Directorate (1975), The Flowers of the Forest (1980) and The Valley of the Fox (1982). And if you'd like to read more about Marlow, the novels, and indeed Hone, then rather than waffle on in an ill-informed manner myself, I'd prefer to direct you to Jeremy Duns's thorough blog post on a writer he calls "The forgotten master of British spy fiction", which I can heartily recommend.

Duns is right in that Hone is largely forgotten these days; many of his books are out of print, although Faber do have all four Marlow novels available as print-on-demand titles. Typically, however, I plumped for a first edition of The Private Sector, copies of which are kind of thin on the ground – AbeBooks only has seven listed. But I didn't buy the copy you can see above for its Bernard Higton-designed dustjacket, fine though it is (and a former designer at the publisher I work at though he may have been, as I detailed in this Ross Thomas post); nor for its condition – you may have noticed that the jacket has a piece or two missing from it, so it's not exactly pristine. I bought this particular copy – from, I think, Any Amount of Books on Charing Cross Road – because it came with an intriguing piece of publishing paraphernalia enclosed.

If you spend a fair amount of time scouring the internet for first editions, you often come across signed copies of books, and sometimes inscribed ones, with personal messages from the author to a reader or a friend (witness this inscribed edition of Joe Gores's Dead Skip). But this particular book came with an entire letter from the author – although, as I later discovered, the letter isn't about the book: 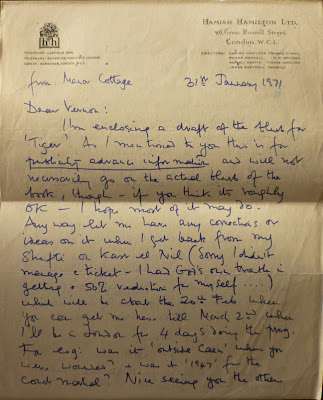 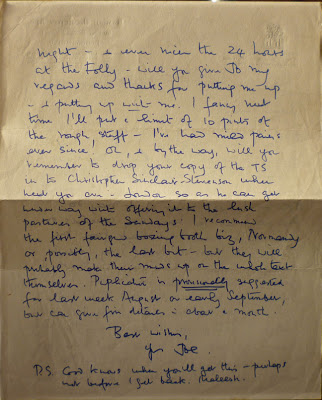 Seen above is a letter by Joseph Hone, dated 31 January, 1971, written on Hamilton-headed notepaper. Now, when I read the letter, I assumed it was Hone writing about The Private Sector to either his editor or publisher at Hamish Hamilton – a "Vernon". It was penned some months prior to the publication of the novel, and talks of an accompanying "blurb", which Hone himself had composed for "publicity advance information" (no sign of the blurb, unfortunately). But the book Hone mentions is called "Tiger". That threw me a bit, but I figured it was probably a code name or working title for the novel, and carried on with this post under that assumption (the post you're reading right now is reworked from that earlier version).

The letter goes on to detail Hone's travel plans, and then turns to a mixture of queries about where Vernon was wounded during the war; reminiscences about "24 hours at the Folly"; a note to self to "put a limit of 10 pints of the rough stuff" (ten pints?! Good Lord); and a request to give the manuscript of the book to Christopher Sinclair-Stevenson – at the time an editor at Hamilton, now a literary agent and author – "so as he can get underway with offering it to the lush pastures of the Sundays" (i.e. serialization in newspapers).

It was all fascinating stuff, and not the sort of communication you'd ordinarily be exposed to – which was why I hoped Mr. Hone didn't mind my posting the letter (Jeremy Duns thought not, and remarked in passing that Hone was an editor himself – William Boyd's). Because it struck me – still does – that the insight it offers into the day-to-day business of publishing is something to treasure. These days, and rather lamentably, it's so much more unlikely that a piece of paraphernalia such as this will end up in a book somewhere, for one simple reason: email. I can't imagine many authors send handwritten letters to their editors or publishers anymore; it's more likely they'll draft an email instead. Stieg Larsson's emails to his publisher and editor wound up in a supplementary volume in the recent Millennium Trilogy Box Set, but that was a choice by said publisher after Larsson's death, not a happy accident.

The letter closes with a suggestion to publish "Tiger" in August or September, and then a final P.S.: "God knows when you'll get this – perhaps not before I get back." That made me wonder if the missive ever reached its final destination, and I signed off the original version of this post marvelling at the fact that here it was, forty years later, giving us all a peek behind the scenes at the publication plans for Hone's debut novel.

Except, it doesn't. Shortly after I posted the first version of this essay, Jeremy Duns popped up in the comments, shedding new light on the letter (you can still see his comment below). Jeremy pointed out that not only was Hone an editor himself, he was an editor at Hamish Hamilton. And one of the writers he worked with was the poet Vernon Scannell, who had an autobiography published through Hamilton in 1971, titled... The Tiger and the Rose. So in fact the letter was written by Hone to Scannell in Hone's capacity as Scannell's editor, and the blurb Hone refers to is for Scannell's book, not his own. All of which explains the reference to "Tiger", the query about Scannell's wartime activities, and, indeed, the Hamilton-headed notepaper.

Phew. Well at least we got to the bottom of it in the end. Anyway, next up in Spy Fiction Fortnight: a review of Gavin Lyall's excellent The Most Dangerous Game...
Posted by Nick Jones (Louis XIV, the Sun King) at 05:35