Martin Amis, Children's Fiction, and We Are All Guilty by Kingsley Amis (Reinhardt First Edition, 1991)

True to form, waiting for me at home when I got back last night was the book I originally intended to blog about when I wrote that post on Martin Amis's London Fields and the kerfuffle caused by Amis's comments about children's fiction, and which I was complaining still hadn't turned up by yesterday lunchtime, whining ingrate that I am. And it's this: 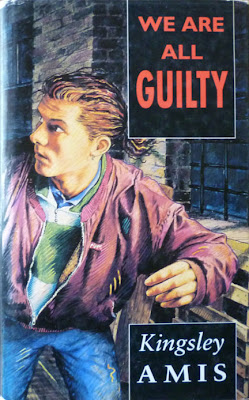 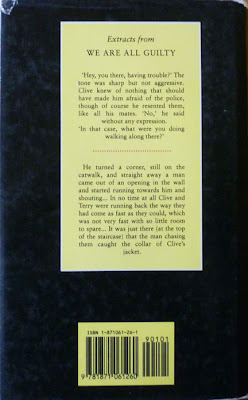 A UK hardback first edition of We Are All Guilty by Kingsley Amis, published by Reinhardt Books in 1991, with a front cover illustration by Derek Brazell. It's Amis Senior's one and only novel – or rather, novella; it's around 90 pages – aimed at younger readers – and as you've no doubt guessed by now, the half-arsed point I was going to make originally was that while Amis M. may never write a children's book, Amis K. most definitely did.

We Are All Guilty is the story of seventeen-year-old London lad Clive Rayner, who breaks into a warehouse with his mate for a laugh and then has to deal with the consequences of a night watchman getting badly injured during the episode. It was written towards the end of Amis's life – he died in 1995 – and in Clive revisits a character Amis originally created for a 1970s television play (I don't know which one).

Trouble is, if I wanted to hold up a children's story as a refutation of Martin Amis's remarks, We Are All Guilty probably wouldn't be the best example. Indeed, as James Wolcott notes in this recent Vanity Fair post on the novella, it may even be the root of Amis Junior's problem (if he even has one) with kid lit. As an experiment it's intriguing, but it's not a great piece of fiction. The dialogue is clunky and outdated – Amis's take on how 1990s teenagers spoke is rather tin-eared – and the overall tone is more akin to a well-meaning 1970s TV drama – which, considering that's where it originated, shouldn't be so surprising. It's certainly conceivable, as Wolcott suggests, that Martin wasn't terribly impressed by it and that that reaction consequently coloured his view of children's fiction.

And yet... there's something about the story that's oddly compelling. Clive is beset on all sides by people trying to forgive him: his parents, the police, the local vicar, even the man whose life he nearly ended. But Clive isn't seeking forgiveness. He knows he done wrong, and he wants to pay for his crime, to be punished. Wolcott identifies this as evidence of Amis's indignation at what he perceived as Britain's liberal nanny state, noting the story's "satirical" nature. It's an interesting notion, and it hews to the received wisdom of Amis's right-leaning politics by this juncture, but I think he's barking up the wrong tree, chiefly because it conveniently ignores the fact that the book must have been written not long after Section 28 was enacted and around the time of the Poll Tax Riots, when Britain felt anything but liberal.

But Wolcott is also overlooking who the book was aimed at. Kids always prefer to read about characters who are older than they themselves are, so We Are All Guilty was – still is, for all I know – read by children younger than Clive, I guess from ages twelve to fifteen. As such, it possibly provided some food for thought. Clive may be a bit hackneyed as a character and sometimes speak as if written by an essentially middle class pensioner, but his confusion and unfocused anger come across quite well. I can see how a younger reader could connect with Clive. And there are no easy answers in the novel either, making it a good topic of discussion for students.

Which is exactly what it has become for one university professor, although perhaps not in the way Amis envisaged. In January this year, We Are All Guilty was published in a translated Persian edition in Iran. The translator of the novella, Professor Ali Arabani Dan of Islamic Azad University, was quoted as saying: "We Are All Guilty is the story of a young man who undergoes decadence due to his economical and family problems, but finally find a new hopeful world in the light of religious instructions... I have been teaching this book for years in original English in my classes, but then I decided to translate it into Persian to make its universally religious content available for the use of our youth."

Which, considering Amis was a confirmed atheist who wrote a number of times about his antipathy towards God – see the essay "On Christ's Nature" in What Became of Jane Austen?, or the novels The Anti-Death League and The Green Man, both of which take issue with the Almighty – is rather ironic. Although, to return to my original point, I suppose it is proof that even a not particularly great piece of children's fiction can still possess a certain power.

Anyway. Onwards. And coming next, as I promised yesterday, it's Bleeck Week...
Posted by Nick Jones (Louis XIV, the Sun King) at 07:06