It's the third and final post in this short series on books wot I have bought recently wot have covers on them designed by that there Raymond Hawkey. And today it's the turn of a novel I bought for three quid in Colin Page Antiquarian Books in Brighton, one of that seaside city's best bookshops (despite it having, according to The Book Guide, a storeroom and an annexe that I've never even got a sniff of): 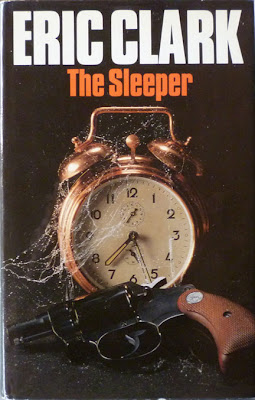 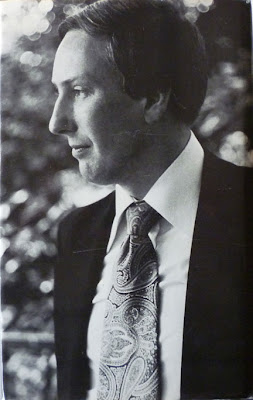 That's a UK hardback first edition of The Sleeper, an espionage novel by Eric Clark, published by Hodder & Stoughton in 1979. The photograph on the front of the dustjacket was taken by Peter Williams, directed of course by the aforementioned Mr. Hawkey; the same team also created the jacket for the 1980 first edition of Gavin Lyall's The Secret Servant, which I reviewed a while back. (The back cover author photo, by the way, is by Jerry Bauer.) But take a look at that Colt revolver on the front. Could that be the same gun (lit differently) as seen on the jacket for the 1976 first edition of Len Deighton's Twinkle, Twinkle, Little Spy, which I blogged about yesterday? And could it even be the same pistol that graces the cover of the 1972 Coronet paperback of Richard Stark's Deadly Edge, which kicked off this run of Raymond Hawkey posts? Is it possible that Raymond Hawkey wheeled out the same props for different book cover studio sessions? 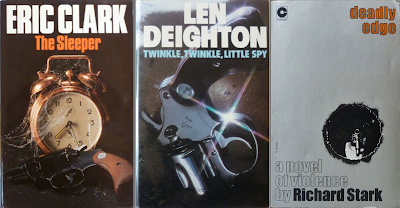 What do we reckon?

Hawkey also designed the jacket for the 1978 Hodder first edition of Clark's debut, Black Gambit, a novel about a Russian dissident scientist and an American prisoner inside for murder and the connection between them, which Jack Higgins reckoned "can only be compared to The Spy Who Came in from the Cold". At least, that is, according to my ever-handy copy of Spy Fiction: A Connoisseur's Guide (not to mention Mr. Clark's own website). Clark is also an investigative journalist, a parallel career which informs his fiction, as he told Spy Fiction: A Connoisseur's Guide's authors, Donald McCormick and Katy Fletcher, noting there was "material I'd collected as a journalist about spies and spying which I couldn't use except as fiction." He's written ten books to date, a mixture of fiction and non-fiction, his latest being an expose of the toy industry.

The Sleeper is about a dormant spy named James Fenn, a "one-time hero of the Hungarian uprising of '56," according to the jacket flap blurb, "ex-Fleet Street journalist, now comfortably ensconced on the Mediterranean island of Gozo, his enlistment to the Soviet cause almost forgotten. As one spy-master looking looking at his file, looking at his file, was to remark: 'Inactive? This sleeper's not just dormant. He's dead.' Not truly dead, of course: only who remembered him now? Who cared? And the awkward answer was that some people cared very much. For Fenn's careful cover had been blown. And when that happens who is to tell when a sleeper is activated by the wrong side." Sounds good to me.
Posted by Nick Jones (Louis XIV, the Sun King) at 04:29