The Friday night booze-up is something of a tradition here in Broken Britain, as a work-weary nation decamps to the nearest pub to drown their sorrows and bitch about those colleagues who've sloped off home instead. Sadly, it's less of an option for me these days, but I can take some vicarious solace from this slim volume instead: 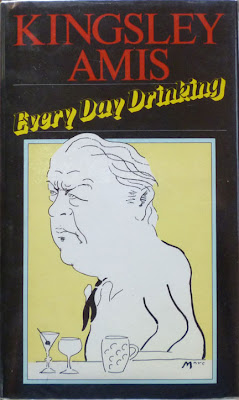 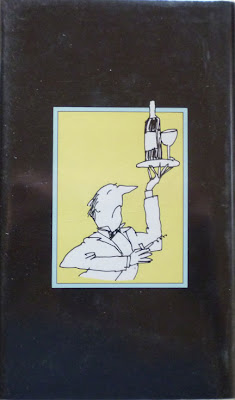 A UK hardback first edition of Every Day Drinking by Kingsley Amis, published by Hutchinson in 1983, with a front cover illustration by Marc. Amis published three books about booze; if you cast your mind back you'll recall I blogged about the first of those, 1972's On Drink, near the beginning of January, while the third volume, a quiz book called How's Your Glass?, was published by Weidenfeld & Nicolson in 1984. All three were collected together by Bloomsbury in 2008 under the title Everyday Drinking – you can read Olman's review of that edition here – but contrary sod that I am, I elected to track down first editions of the individual volumes instead. At least, the first two, anyway. I'm not so fussed about getting hold of a copy of How's Your Glass? Never say never, though.

Every Day Drinking is in fact a collection of articles originally written for the Daily Express; in the introduction Amis notes that there's "a certain satisfaction to be got from bringing out a book of collected journalism. Being paid twice for the same basic work is always agreeable, and in my case not as frequent as I should like." He then goes on to take issue with the damage done to his prose by mirthless editors: "The most satisfying satisfaction of all, at least until the cheque comes, is afforded by restoring editorial cuts. There's no such thing as a non-cutting editor; it's not in the nature of the beast. The fellow prowls through your copy like an overzealous gardener with a pruning hook, on the watch for any phrase he senses you were rather pleased with, preferably one that also clinches your argument and if possible is essential to the general drift of the surrounding passage. Then – slash!"

I suppose I should take umbrage at that, being an editor myself, but having worked alongside many other editors over the years, I know how brutal some can be with words. I, on the other hand, am a towering exception to Amis's rule, a shining example of deft and adroit and most of all considerate editing. But then you knew that already, right? 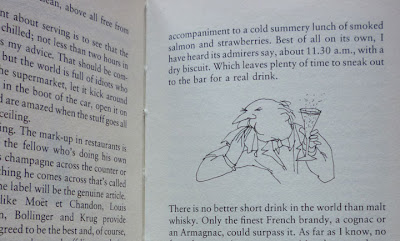 Of course, quite how wise it was for Amis – who, as Michael Barber pointed out in his excellent essay on Amis, was "a well-adjusted alcoholic" – to be writing about drink on a weekly basis is open to debate. However, the fact remains he did, and many of the essays in Every Day Drinking are as acerbic and witty as you'd expect. They're also intermittently illustrated by Merrily Harpur (as is the back cover), whose cartoons and articles appear everywhere from The Guardian and The Daily Mail to Fortean Times and Private Eye. She's also an accomplished painter; there are some splendid landscapes by her on her website, which are well worth a look. 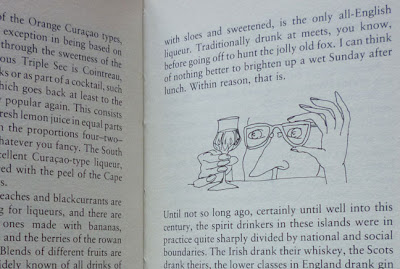