The UK Hodder/Coronet paperback editions of Donald 'Richard Stark' Westlake's Parker novels have been something of a recurring topic on Existential Ennui, probably to the befuddlement of all concerned, i.e. the merry band of Westlake/Stark obsessives who orbit The Violent World of Parker. But I find publishing histories weirdly fascinating (I know, there's no hope for me), and so, the Coronet paperback editions of the Parkers being the first British editions of the novels, and also their having gone through quite a few different cover designs in quite a short space of time, I keep coming back to 'em (chiefly here, here, and most recently here).

This time, though, I've actually got a fairly good reason for returning to them (yet again), namely a Westlake Score – a printing of the Coronet edition of Stark's debut novel, Point Blank! (a.k.a. The Hunter) that, to my knowledge, has never been seen online before: 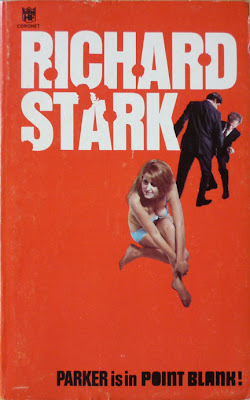 That is the 1970 second impression/printing of the British paperback edition of Point Blank!, published Coronet/Hodder Fawcett in 1970. I've posted a Coronet Parker with a similar cover design before – the 1970 second printing of The Rare Coin Score – but I didn't realise that Point Blank! had also undergone a corresponding makeover for its second printing. And with the help of a couple of other sneaky recent Westlake Scores, I can now demonstrate the development – or rather developments, plural; the Coronet Parkers went through two parallel advancements – of the UK Coronet/Hodder Fawcett paperback editions of the Parker novels. Prepare to be amazed. 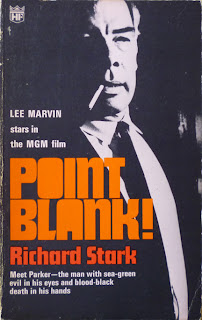 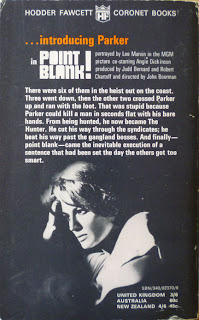 The second UK printing of the novel came, as we've already discussed, in 1970, and looked like this: 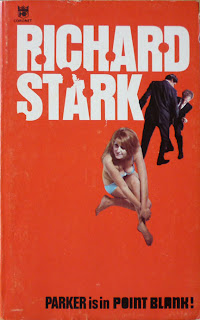 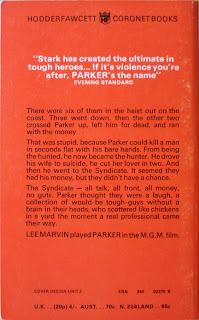 Scroll down to the bottom half of this post and you'll be able to see the similarly styled second printing of The Rare Coin Score from the same year; as far as I know, Coronet only issued Point Blank! and The Rare Coin Score with this type of cover, a design which I think was modelled on/aped the cover for Coronet's 1969 movie tie-in edition of The Split, and which is credited (for a change; the Coronet Parkers mostly didn't carry design credits) to the mysterious-sounding Unit 2.

By 1970, out of the twelve Parker novels that had by then been published in the US, Coronet had only published six: Point Blank! (twice), Rare Coin (twice), The Split (once – the movie tie-in edition), and (all once, all under the same illustrative style of cover) The Green Eagle Score, The Black Ice Score and The Sour Lemon Score. But that didn't stop the publisher from moving on to yet another style of cover design in 1971 – the famed bullet hole covers: 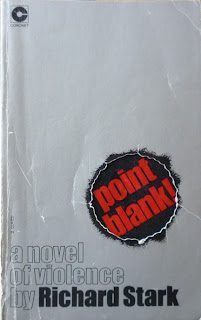 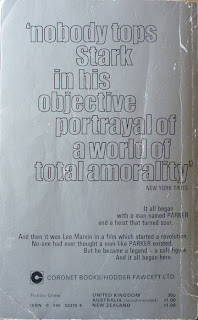 Seen above is Coronet's third impression of Point Blank!, actually from 1972, by which point the bullet hole iterations of the Coronet paperbacks had superseded previous cover designs and the Coronet range of Parkers had been expanded. Under "Also by Richard Stark" on the half-title verso in this edition of Point Blank!, every Parker novel is listed bar Slayground, Plunder Squad and Butcher's Moon, none of which Coronet had published by this point (and the last of which hadn't even been published in the States).

Designed by Raymond Hawkey, the bullet hole design was a unique double-cover concept. The silver outer cover bearing the author's name and the legend "a novel of violence" (the same on every book in the series) featured a die-cut hole with burnt edges, through which could be seen the flimsier, black inner cover, where the book's title was printed – here in red, but variously in orange, yellow, blue, and so on: 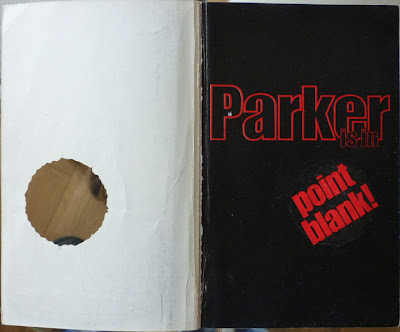 That's Point Blank! with the front outer cover open, and: 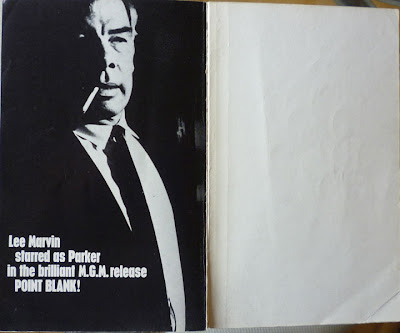 With the back outer cover open. So that's how one strand of Coronet's British paperback editions of the Parker novels developed.

But that's not the end of the story. Because there's also the other strand of Coronet's Parkers, chiefly The Rare Coin Score, which followed a similar path to Point Blank!, but started from a different initial design. Which was this: 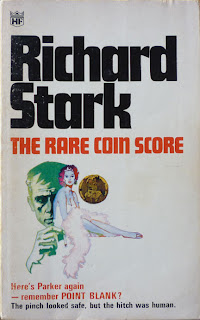 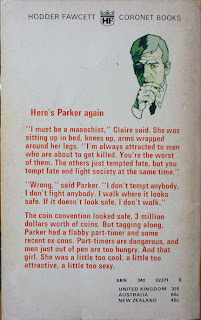 That's the 1968 Coronet first UK edition of The Rare Coin Score. Published the following year to the first Coronet edition of Point Blank!, The Rare Coin Score shared a style of (uncredited) cover design with The Green Eagle Score (also 1968), The Black Ice Score and The Sour Lemon Score (both 1969): 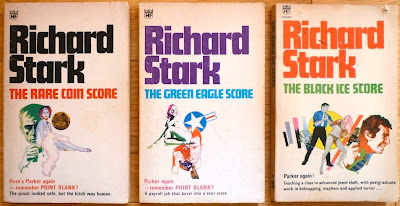 As with Point Blank!, The Rare Coin Score was also given the faux movie treatment for its second impression in 1970: 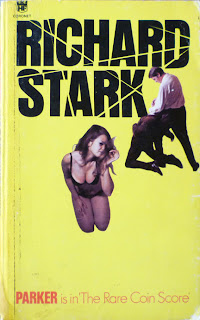 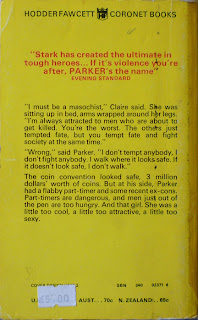 Which, also as with that second printing of Point Blank!, is credited to the intriguing Unit 2, who I fancy were an elite paramilitary group who dabbled in design on the side, a supposition I shall continue to believe until proven otherwise. Anyway, finally, for its third printing in 1972, The Rare Coin Score joined the rest of the Parkers (well, almost all of them, anyway) in the Hawkey bullet hole design: 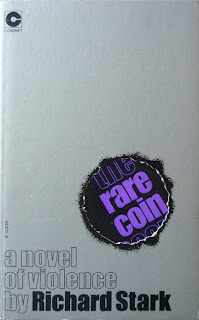 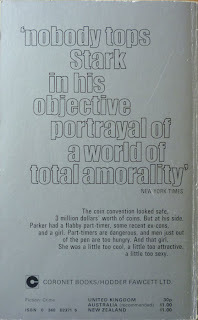 And that's pretty much it. Until we get to Butcher's Moon, that is, the 1977 Coronet edition of which is a whole other story. For now, though, I'll leave you with one last visual demonstration of the development of the Coronet Parkers, as if the point hadn't been hammered home enough. Evidently I missed my true calling as a particularly annoying and pedantic schoolteacher... 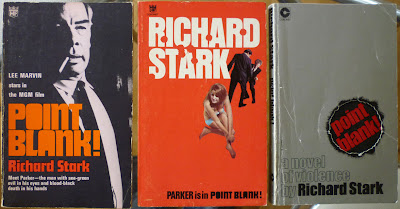 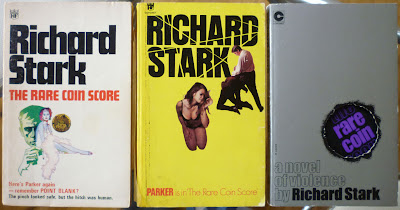