Lewes Bookshop Bargain: Gentleman Traitor – What Has Happened to Philby...? by Alan Williams

Now this is a rather strange kettle of fish: 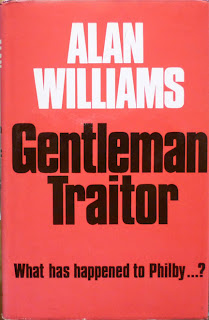 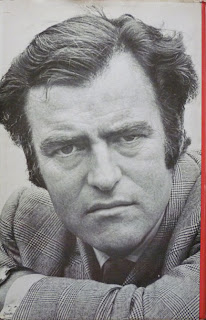 It's a UK hardback first edition of Gentleman Traitor by Alan Williams, published by Blond & Briggs in 1974, with a dustjacket designed by Ken Williamson. I bought it for £3.50 in the famed Fifteenth Century Bookshop (follow that link and scroll down to see the amusing comments about it) in Lewes, the East Sussex town etc., etc. It was lurking in the history section with some other spy-themed tomes, but it's actually a novel – or perhaps speculative fiction. The book takes as its premise the notion that Kim Philby, informal head of the Cambridge Spy Ring and subsequent defector to the USSR, wants to return to England... which of course he never did, eventually dying in Russia in 1988, but then Alan Williams wasn't to know that in 1974.

It's an intriguing idea, nevertheless, and according to my perennially useful copy of Donald McCormick's Who's Who in Spy Fiction, it's also Williams' most "unusual and intriguing" novel – or at least it was by 1977, when Who's Who... was published; Williams wrote four novels after that. McCormick reports Williams as saying that Gentleman Traitor was based on an interview a friend of Williams conducted with a sozzled Philby in Moscow, who claimed he was "'fed up with Russia and wanted to leave'. In the novel," McCormick continues, "he did just this, and, bored, drunken and embittered in Moscow, agreed to accept a seedy job in Rhodesia for British Intelligence (still apparently riddled with old traitor chums of his always willing to lend a helping hand)... Philby... was vividly portrayed in this exciting and highly intelligent story." There's also a claim on the dustjacket back flap of Gentleman Traitor that Williams himself encountered Philby in Beirut the day before Philby disappeared to Russia.

When I picked up this copy of Gentleman Traitor in the shop I vaguely recognised the author photo (by Bryan Heseltine) on the back cover. I have a feeling that might be from TV appearances Williams made years ago when I was a kid: he was (I assume he's retired now, although he's still alive as far as I know) a journalist as well as a novelist, writing for the Daily Express and covering the wars in Algeria and Vietnam, the Six Day War, the revolt in Czechoslovakia and the conflict in Northern Ireland. According to McCormick, when Williams was in Algeria, "both the Algerian and the French forces complained about him and suspected he was a spy!" Some of his earlier exploits are even more remarkable, though: when Williams was a student at Cambridge, he helped smuggle a Polish refugee out of Warsaw; he was involved in the 1956 Hungarian Revolution and masqueraded his way into East Germany; and he worked for anti-Communist radio station Radio Free Europe, which had links with US counter-intelligence.

Son of actor and playwright Emlyn Williams, Alan wrote eleven novels in total, one of which, 1965's Snake Water, was turned into a 1968 James Garner-starring movie, The Pink Jungle. Writes McCormick of Williams' fiction: "One of the most important lessons of Alan Williams' ultra-realistic spy novels is that they are not just mere entertainment, nor are they, like some of this genre, mischievous realism. Each book takes a slice of history and builds around it with real and fictional people a credible story that really could have happened. Yes, even the Philby story... well, not in 1977, perhaps, but ten years ago such an incident would not have been as inconceivable as it sounds."

If you're interested, there's a bit more info on Williams and a few links over at the Mystery File blog.
Posted by Nick Jones (Louis XIV, the Sun King) at 05:46