Book Review: The Naked Runner (Hodder First Edition), and Some More on its Author, Francis Clifford

A common theme on Existential Ennui – more of a lament, really – is how certain authors seem to drop off the radar, particularly dead ones. Doubtless this was always the case, but the rapid expansion of the internet, which has become most people's main method of finding out information, has meant that, as well as the traditional publishing ignominy of their backlists falling out of print, many middle-ranking writers who died before the internet really got going don't get their due online either. Some supposedly forgotten authors – Gavin Lyall, say – are still in print (just about, anyway: Lyall's 1965 thriller Midnight Plus One was reissued by Orion in 2005 as part of that publisher's Crime Masterworks series) and warrant a fairly decent Wikipedia entry. Others, however, are denied even that.

One such is Francis Clifford. I've blogged about Clifford – real name Arthur Leonard Bell Thompson – before, notably in this post about his 1953 debut, Honour the Shrine. Clifford wrote nineteen crime and espionage novels, and won the Crime Writers Association Silver Dagger Award twice, yet his Wikipedia entry consists of two lines and a bibliography and his un-bought books haunt eBay. I mentioned in that previous post that his 1966 novel The Naked Runner was turned into a 1967 Frank Sinatra-starring movie (his 1959 book, Act of Mercy, also became a film, 1962's Guns of Darkness), but at the time I didn't have a copy of the book. Now, however, I do: 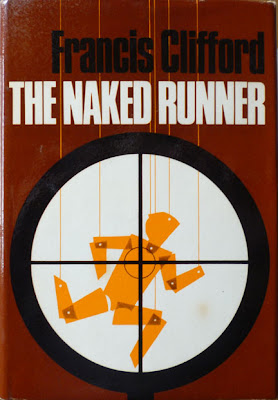 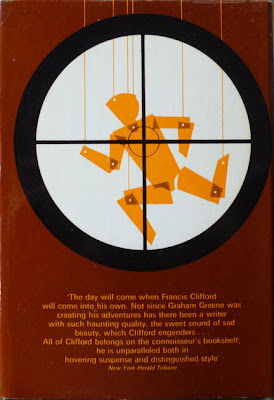 A 1966 UK hardback first edition, published by Hodder & Stoughton, with a dustwrapper designed by Peter Calcott (who also designed the jacket for Hodder's 1967 first edition of Ross Thomas's Spy in the Vodka, a.k.a. The Cold War Swap). And for once, I've actually read it – and it's a little cracker.

The novel follows widower and single father Sam Laker, who on the way to work one day saves a woman and her baby from being run over and consequently comes to the attention of Martin Slattery, shadowy secret service type and former wartime colleague of Sam's. Laker is due to fly to Leipzig in Germany's Russian Zone with his son, to attend a trade fair and then do some sightseeing; Slattery asks him to deliver something hidden in a watch strap. Sam reluctantly agrees – it turns out he'll be delivering it to a woman he last saw during the war and who he believed to be dead – and from that point on falls into a nightmare, as his world is turned upside down and he's forced to become an assassin.

Beginning, as it does, in England, the novel initially comes across as rather dated and jolly hockey-sticks. But before too long there are glimpses of Laker's dark past, notably the savage killing spree he embarked on whilst behind enemy lines during World War II. (Something that a lot of 1950s-1970s thriller and espionage novels share is that the Second World War was still a recent memory. Many authors like Clifford fought in the war, an experience which informed their fiction.) Sam's subdued anger becomes increasingly key as the novel progresses and he becomes more and more paranoid.

There's a cynical seam running through The Naked Runner that makes it feel quite contemporary, despite the Cold War trappings. There's no right or wrong here; all the players (save Sam's son) are complicit somehow in what Sam goes through, including himself. Towards the end of the novel Sam's situation becomes so bleak and hopeless it almost becomes too much; that Clifford does eventually offer a sliver of hope is, in the final analysis, cold comfort.

I mentioned at the start of this post that Clifford doesn't have much of a Wikipedia entry... but he does have a decent entry in the afore-blogged-about Who's Who in Spy Fiction by Donald McCormick, which reveals all sorts of fascinating titbits about him. Prior to becoming a novelist he worked in the rice trade in the Far East before World War II, and then as an industrial journalist for the steel industry; by the time of his death in 1975 his world book sales had topped the five million mark; and the Los Angeles Times described his 1967 novel All Men Are Lonely Now as "the finest espionage novel of the decade". Oh, and writing in the Guardian newspaper, critic Franci Iles said Clifford was "almost unique in combining a deeply felt philosophical truth with the real excitement of the thriller".

So there you go. At least there's a bit more about Clifford online now. (And I now have another post about Clifford here.)
Posted by Nick Jones (Louis XIV, the Sun King) at 05:17