Or at least, a sequel I never knew existed, anyway.* (And that post title makes it sound like this will be the first in a series of posts, but unless I stumble upon any other books that are little-known sequels to other books, it won't. Sorry.) I found this on a trip up to London, lurking in the musty bargain basement (the book, not me; I was more browsing than lurking) of one of Charing Cross Road's dwindling number of second hand bookshops: 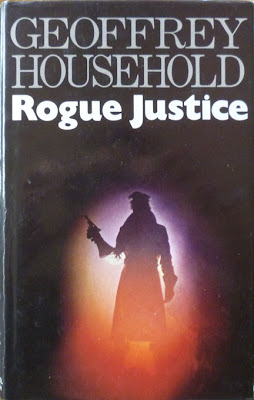 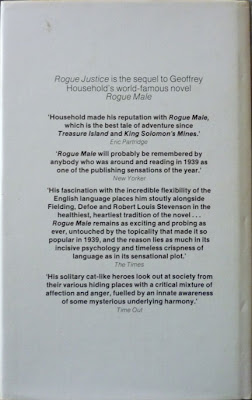 A UK hardback first edition of Rogue Justice by Geoffrey Household, published by Michael Joseph in 1982. It was four quid, which, it transpires, was an absolute bloody steal: there are very few copies of this edition – or indeed any edition – of the book for sale online, and those that are for sale range from £40 for a first edition with a fair jacket up to over a hundred pounds for a fine copy (which mine virtually is). In fact, there were seemingly only ever three editions of the novel: this UK Michael Joseph UK first; a 1983 US Little, Brown hardback first; and a 1984 UK Penguin paperback. In total, AbeBooks only has eleven copies, in any edition, listed for sale.

All of which is very strange, considering Rogue Justice is the sequel to one of the best known, most brilliant thrillers ever written: 1939's Rogue Male, which famously centres on an unnamed English nobleman's attempt to assassinate (and then escape from) an equally unnamed European dictator who bears more than a passing similarity to a certain A. Hitler. (Should you so wish, you can read my thoughts on it here.) When I saw this copy of Rogue Justice on the shelf, it was like one of those dreams you sometimes have about amazing books or comics (or bookshops or comic shops) that, when you wake up, don't actually exist. (Or is that just me...?) Except, in this instance, the impossible, imaginary book really did exist.

Its scarcity might be down to lack of interest/sales historically (and therefore lack of multiple editions), possibly due to the huge gap between the publication of Rogue Male and the publication of Rogue Justice – over forty years, which has to be one of the longest ever between an original and its sequel (I say "has to be", but, perhaps unsurprisingly, I haven't done any actual research to back that statement up), at least as written by the same author (there are, of course, sequels to books written by persons other than the original author published hundreds of years after the fact). Because there is that weird stigma where the longer it takes for a sequel to arrive – whether it be novels, films, albums, or whatever – the more it smacks (to some people anyway) of either desperation or a paucity of ideas. I'm not entirely sure why that is. After all, if you think about it, there's almost something more graspingly avaricious about pumping out a sequel directly after a successful work.

I don't know what the reception was for Rogue Justice when it was published nearly thirty years ago; there are various reviews online, but those are more recent, either on Amazon or on blogs. I can't find any critiques from contemporaneous newspapers or magazines, which isn't that unusual: who knows how much material there is sitting in newspapers' archives that's yet to make it online (and may never make it online). In any case, I'm still intrigued to read it. According to the blurb on the dustjacket flap (which begins, "It must be rare that an author writes a sequel to a novel published over forty years earlier"; evidently that copywriter couldn't be arsed to research what the longest gap between an original and a sequel was either), Rogue Justice picks up directly after Rogue Male, and follows our nameless but noble hero as he returns to Germany to finally off Der Fuhrer (who, unlike in Rogue Male, is actually named in this novel).

The dustjacket design on this edition is credited to Chris Yates. Now, I might be barking up not only the wrong tree but be in entirely the wrong woods here, but I have a feeling that the Chris Yates who designed this dustjacket might actually be this Chris Yates – star of BBC2's A Passion for Angling and author of a brace of books on fishing. I'm basing this wild supposition on a snippet of information I found in this interview with Chris in The Idler, where it's stated that he was once a photographer and designer working chiefly on book and album covers. So, y'know, it could be utter bollocks on my part (no change there), but it feels kind of right, so I stand by the results of my meagre research until proven otherwise.

(*It's since come to my attention that Rogue Justice was recently serialized on digital radio station BBC7. Which just goes to show what a culturally blinkered nincompoop I am.)

(UPDATE: Should you be interested, I've since reviewed Rogue Justice.)
Posted by Nick Jones (Louis XIV, the Sun King) at 04:33