Let's begin what will be a reasonably random offering of posts this week with a good old traditional Westlake Score:

Namely, the US hardback first edition (and first printing) of Smoke by Donald E. Westlake, published by Mysterious Press in 1995. I'm not actively seeking Westlakes at the moment, but this came drifting past on eBay, and so I netted it, for a few reasons. For one, it's a true first edition from that 1990s hinterland when Westlake didn't have a UK publisher (see also 1990's Drowned Hopes, 1993's Don't Ask, etc.), so the only first editions on offer are American ones, and in order to get your hands on one of those, it's usually a case of ordering from a US dealer. Therefore, when one pops up on eBay from a UK seller, it's often worth grabbing it. For another, the story is really appealing: it's an uncommon 'serious' novel written under Westlake's own name, but it's about a burglar who becomes an invisible man. And then finally, there's this: 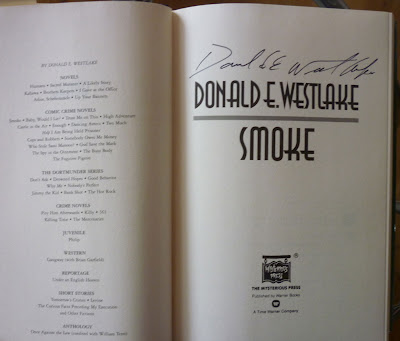 It's signed, which is always a joy, even when you do already have a pretty good collection of signed Westlake first editions. The dustjacket design is by Jackie Merri Meyer and the illustration on the front is by Jeff Fitz Maurice, whose quirky style reminds me a little bit of Beryl Cook; Meyer and Maurice were also the team behind 1996's What's the Worst That Could Happen? And I'll have a couple more Westlake Scores over the next week or two, both of which I'm quite chuffed with, so look out for those.
Posted by Nick Jones (Louis XIV, the Sun King) at 05:53