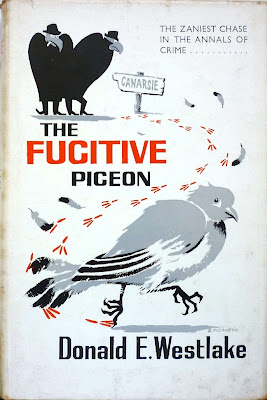 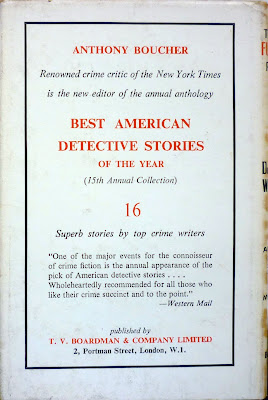 This is the UK hardback first edition of Donald E. Westlake's The Fugitive Pigeon, published by T.V. Boardman & Company in 1966 – originally published in the States in 1965. The notable thing about this particular novel is that it's the first of Westlake's 'capers', i.e. the first time he hit upon writing a more amusing – yet still crime-focused – book. Prior to The Fugitive Pigeon, the novels Westlake wrote under his own name were straight-up, sometimes violent crime novels (although Killy is more about unions, but anyway). And of course the books he wrote under the pseudonym Richard Stark were even more violent and humourless (and also utterly terrific). But with The Fugitive Pigeon – in which an innocent bartender finds himself the target of two gunmen, and has to find out why – his books took a comedic turn, much to his own surprise. After that, the majority of the novels Westlake wrote under his own moniker were at least partly comical in nature.

This being a Boardman edition, the dustjacket is by Denis McLoughlin, who illustrated and designed dozens of jackets in Boardman's American Bloodhound Mystery series (including the aforementioned Killy), of which The Fugitive Pigeon is number 526. Boardman were key in bringing many US mystery and suspense authors into hardback in the UK, including Ed McBain, Lionel White and, unsurprisingly, Donald Westlake.

But it's for McLoughlin's jackets that they're remembered and collected these days, although not as much as they should be. The best of McLoughlin's covers are restricted-palette, chiaroscuro mini-masterpieces: there's a gallery of some of them on this Dan Dare site; the ones from 400 up to 600 are particularly striking, among them McLoughlin's brilliant, bloody-handed cover for Westlake's Pity Him Afterwards. I own a Boardman copy of Killy (American Bloodhound #454, 1964), plus a Lionel White novel, The Time of Terror (American Bloodhound #351, 1961, which I still haven't read): 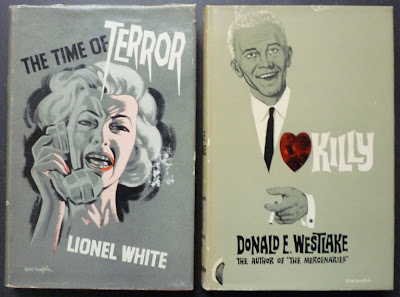 Anyway, back to The Fugitive Pigeon: I got this copy, slightly incongruously, at the Paperback and Pulp Fair I mentioned at the end of last week (there were a few hardbacks on offer too). Three quid it cost me, which isn't a stupendous bargain – there are copies for not much more than that online – but is still not to be sniffed at. I also picked up a stack of paperbacks, and it's these (and possibly one or two other paperbacks I've bought recently – although I may save some of those, as I've got enough paperbacks either arrived or on their way for at least another week's worth of posts) that will form the basis of next week's blogging. Yes, next week on Existential Ennui it's Paperback Week, starring Richard Stark, Peter Rabe, Ross Macdonald, Ross Thomas, John D. MacDonald and Jim Thompson. By God that'd be a hell of a dinner party.
Posted by Nick Jones (Louis XIV, the Sun King) at 03:48