File Under Reference: Who's Who in Spy Fiction by Donald McCormick

Here's a book that – as I mentioned in the previous post – I was partly inspired to buy by (buy by? Bye bye! Ahem. Sorry) my friend Roly, who noticed it in one of the second hand bookshops in Cecil Court when we were up in London for the day. I think I'd flicked through it myself when I'd been in that shop before, but if Roly hadn't picked it up and pored over it, I doubt I'd have got round to buying a copy (a cheaper copy, bought online; the one in the shop was overpriced). Therefore, I think I can safely blame this one on him. So what is it? This: 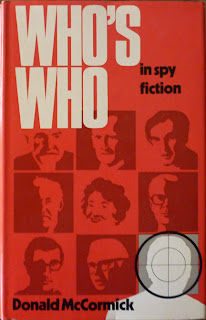 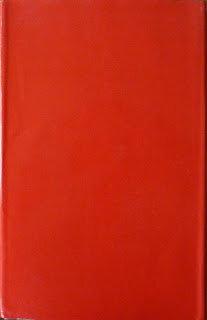 The UK hardback first edition of Who's Who in Spy Fiction by Donald McCormick, published by Elm Tree Books in 1977, with a dustjacket designed by Lawrence Edwards. And it is essentially what the title suggests it is: potted biographies on the then-leading lights in espionage fiction, although as ever with these things it's far from comprehensive: there's no sign of, for instance, Ross Thomas, who by this point had written a number of spy novels. That said, McCormick does admit in his introduction that there are omissions, some due to particular authors not wishing to be identified merely as spy novelists. And even with that proviso, there are still enough intriguing authors included to keep you reading. Speaking of which, can you name all eight writers featured on the cover? (You might need to click on it to see properly; answers at the end of the post.*)

Who's Who in Spy Fiction was part of a series of books published by Elm Tree, each one focusing on a different genre. Brian Ash's Who's Who in Science Fiction preceded Spy Fiction by a year, while Mike Ashley's Who's Who in Horror and Fantasy Fiction also appeared in 1977. Sadly I haven't been able to find a trace of perhaps the most interesting of the companion titles listed on the Spy Fiction jacket back flap, Nigel Morland's Who's Who in Crime Fiction, so presumably it never materialised.

Donald McCormick wrote a variety of non fiction books, among them works on the British Secret Service, the Israeli Secret Service, and Ian Fleming, alongside whom he worked at The Sunday Times in the late '50s/early '60s, where McCormick was Assistant Foreign Manager. His relationship with Fleming stretched further back than that though, to the Second World War, during which McCormick served in the British navy and undertook field work for Fleming, who was Assistant to the Director of Naval Intelligence. So McCormick certainly knew his stuff vis a vis espionage, and was better placed than most to pen potted appreciations of the authors toiling in the at-the-time massive spy fiction market. (Tellingly, his piece on Fleming closes with the prediction that "It is as an extraordinarily good Assistant to the DNI that he will ultimately be remembered". Er, or not.)

Anyhoo, Who's Who in Spy Fiction should come in handy for a number of forthcoming espionage-related posts on Existential Ennui...