What's that in brackets up there in the post title? BCA? BCA? A book club edition?! After everything I've written about book clubs? What in the name of Christ is going on? 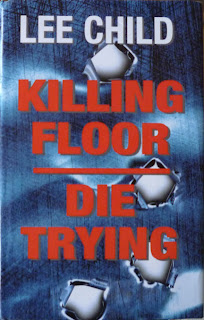 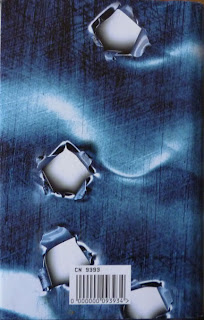 This here is the 1998 BCA hardback omnibus edition of Lee Child's first two novels, Killing Floor (1997) and Die Trying (1998), and unlike the majority of book club editions, which are seldom of interest to book collectors and litter Amazon Marketplace and AbeBooks like scrounging single mothers apparently litter Britain (at least, according to the Daily Mail and its mean-spirited NIMBY readership), this particular BCA edition is fantastically scarce and consequently rather valuable. There are currently no copies for sale on AbeBooks, one copy for sale on Amazon Marketplace UK for over a hundred quid (UPDATE: er, at least it was a hundred quid; it's now £3.99. Go figure) and one copy for sale on Amazon Marketplace US for nearly $400. (UPDATE: er, make that just over $100. Still, pretty expensive, even so.) Crikey.

Did I pay that much for it? Did I fu-- no, I didn't. I got lucky and scored a cheap copy, from a seller who possibly didn't know how scarce it is. I was originally going to try and find first editions of the individual novels, but first editions of Killing Floor – which was recently selected as one of one million novels to be given away on World Book Night – go for around thirty quid and firsts of Die Trying go for upwards of sixty. Luckily, I spied this omnibus – the only omnibus there's been of Child's Jack Reacher novels, which I wanted to try after hearing good things about them – and killed two birds with one stone.

As to why it's so scarce... I have no idea. Did BCA only print a small quantity? Was the bulk of the run pulped for some reason? Or is there a mountain of copies sitting forgotten in a warehouse somewhere? Inquiring minds need to know...
Posted by Nick Jones (Louis XIV, the Sun King) at 09:17