To Arundel and Chichester

A trip out at the weekend took me and the bird to a couple of rather ace bookshops, both called Kim's. One's in Arundel, the other's in Chichester, but of the two I'd say the Arundel one is better: absolutely stuffed with old books on three (or possibly four; I stopped counting) floors. Arundel is also the prettier of the two towns (both of which are in West Sussex), quite small, with a great big castle and cathedral, all set on a picturesque hill. We took some pictures but I forgot to resize them, so here's one I borrowed off the interweb instead: 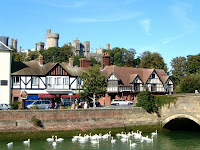 That's a feck of a lot of swans. There weren't that many swans there when we were there. Three at most. Anyway, much more importantly, both Kim's Bookshops offered up a huge haul of books: 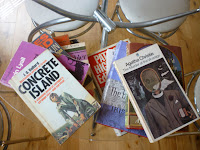 At the Arundel Kim's, Rachel bagged a few things: 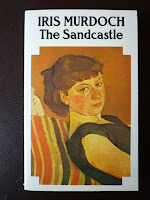 A 1985 Triad paperback of Iris Murdoch's The Sandcastle. Unfortunately, when we got home she discovered she already had an original Penguin of the book. Whoops. But this new copy did come with a very neat shopping list inside it. Bovril and scones anyone? She also got this: 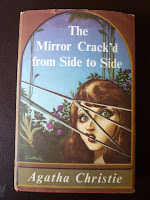 A 1962 Book Club edition of Agatha Christie's The Mirror Crack'd from Side to Side (interesting cover there), and this: 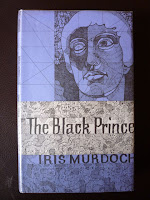 A 1973 Chatto & Windus first edition of Iris Murdoch's The Black Prince in hardback, with a jacket designed by Christopher Cornford. Rachel's slowly working her way through Murdoch and Christie, and has now furnished herself with a list of Christies so she doesn't double up anymore (she's off book shopping in Lewes at lunchtime today, I believe – there's a fair few Christie paperbacks scattered around the Lewes bookshops). She's particularly keen on the Fontana editions with the Tom Adams covers, one of which she picked up at the Chichester Kim's: 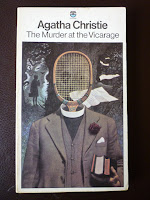 That's a 1975 Fontana paperback. Those Tom Adams covers are great. I think we're going to track down a copy of Tom Adams' Agatha Christie Cover Story at some point – I've never read any Christie, but I'd like to have a look through that book.

So that was Rachel's haul. Mine consisted of paperbacks for the most part from the Arundel Kim's, but the Chichester Kim's did turn up a couple of nice hardbacks, so it was definitely worth the further jaunt over there. From Arundel I got: 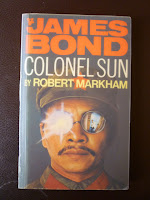 A 1970 Pan paperback of Kingsley Amis' Bond novel Colonel Sun. Unfortunately it has clear plastic affixed to the cover with no way of removing it, but it was only a couple of quid, and I have a hardback first edition of this one anyway. Next: 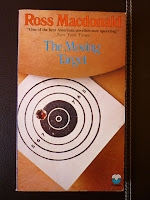 A 1971 Fontana paperback (second impression) of Ross Macdonald's The Moving Target (first published in 1949). This is the first of Macdonald's (a.k.a. Kenneth Millar) novels starring the detective Lew Archer, played by Paul Newman in the excellent movie Harper (renamed Lew Harper, natch; I love that film). Comics writer Ed Brubaker is a fan of these, so I thought I'd give one a go. Next: 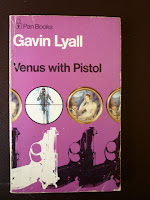 1971 Pan paperback of Gavin Lyall's fifth novel, Venus with Pistols. I've read The Wrong Side of the Sky, and I have The Most Dangerous Game to read still, so I thought I'd grab this one too. Next: 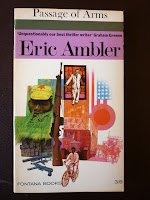 A 1967 first Fontana paperback of Eric Ambler's Passage of Arms (first published 1959). Ambler is another British thriller writer like Gavin Lyall; I read in an interview once that Kingsley Amis was a fan of these two, as well as of Geoffrey Household. I've got a first Penguin paperback edition of Household's Rogue Male to read at some point, so now I have an Ambler to try as well. Next: 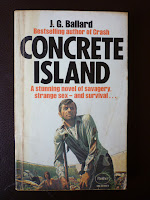 A 1976 first Panther paperback of J. G. Ballard's Concrete Island (originally published in hardback in 1974) with a cover illustration by Richard Clifton-Dey. Been meaning to try some of those early Ballard SF novels – i.e. The Burning World, High Rise – so this was a good find. And that was the lot from Arundel. The Chichester Kim's was a smaller shop with a less interesting selection, but I did get these there: 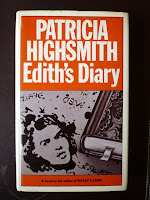 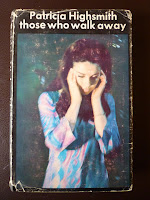 A 1967 Heinemann hardback first edition of Highsmith's Those Who Walk Away. The dustjacket's a bit knackered on this one, but what the hell. I figured I might as well nab it. And it does mean I have an almost unbroken run of Highsmith first edition novels from The Two Faces of January (1961) to her final novel, 1992's Small g: A Summer Idyll. I'm only missing firsts of The Tremor of Forgery (although I've read that in paperback already) and People Who Knock on the Door.