Punisher to the Max: Punisher Max by Garth Ennis 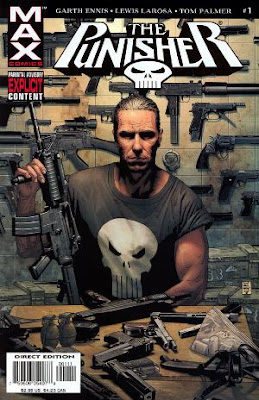 Comic Book Resources has just published a top ten of the best Punisher stories ever told, voted for by CBR readers. What's interesting is that nine of those ten stories were written by Garth Ennis. Ennis is without a doubt one of the greatest comics writers ever, a truly gifted character writer with a flair for naturalistic dialogue, and with a body of work that includes at least three absolute classic runs of comic books: Hellblazer (issues #41-83), Preacher (the whole series), and Punisher Max (#1-60, plus the Born miniseries and a few one-shots).

That last one was, alongside Lucifer, one of my favourite ongoing comics throughout the 2000s, and indeed eight of the CBR top ten stories are from the Max series. It was a remarkable run of comics, and that top ten reminded me of a blog post I wrote a while back. So I went looking for it... and realised it's not on this blog. It's on my old blog, which is still out there, unloved and un-updated. But I was quite pleased with that post at the time, so here it is again for anyone (which is to say everyone, if there is an 'everyone') who missed it:

Why The Punisher is The World’s Greatest Comic Magazine 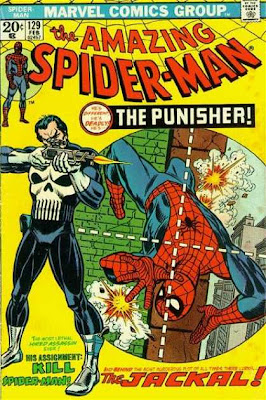 I can still vividly recall the first Punisher story I ever read. It was his first appearance, in Amazing Spider-Man #129, although I wouldn’t have read the story in its original US Marvel colour comic book; it would’ve been in the ’70s British weekly black and white reprint Spider-Man comic. (Back then I wasn’t even aware there were full colour American comics.) Being weekly instead of monthly, often the UK Spidey comic would split stories into parts, so as not to catch up to the monthly US Marvel titles they were taking their material from, and in my memory (if not in actuality), this happened to the Punisher’s debut, which is part of the reason it lodged in my brain.

See, in this story, the Punisher shoots Spider-Man, an event that at the time shook me to my bones. As far as I was concerned, Spider-Man’s enhanced agility meant he could dodge bullets – surely everyone knew that – and yet there was Spidey, taking a slug in the chest. And what made it worse was that, unlike the US edition, the story ended right at that point, to be continued the following week. I was in shock. I wasn’t old enough to realise that Marvel weren’t about to kill off their biggest character; all I knew was that Spidey had been shot and might very well be dead. In the space of a comic page, the concrete foundations of my beliefs had crumbled and my tower of faith – in Spider-Man, in comics, in the world – had collapsed. Up was down. Black was white. Spidey was dead.

Of course, next week I found out he wasn’t; the Punisher had used concussive ammunition rather than live rounds, or some other convenient bollocks like that. But it didn’t matter: the Punisher was suddenly the most formidable Spider-Man opponent I’d ever come across. After all, if he could draw a bead on Spidey once, he could do it again.

I must’ve encountered the Punisher a number of times after that in various guest appearances, but none of them lodged in my memory (although, as is often the case, his origin – possibly the darkest of any Marvel character – somehow seeped into my consciousness; in brief: Vietnam vet Frank Castle’s family are murdered by mobsters in Central Park, so he elects to go on a one-man criminal-killing rampage). By the time the character was at the height of his popularity in the late ’80s and early ’90s, starring in his own titles, I was drifting away from comics. It wasn’t until the year 2000 that I finally enjoyed another Punisher comic (we’ll forget the disastrous 1998 miniseries where the Punisher dies and gets turned into an angel of death; continuity-wise Marvel seem to have forgotten it too): the Garth Ennis/Steve Dillon relaunch under the Marvel Knights banner. Writer Ennis, never a big fan of superheroes, took the opportunity to inject some comedy into proceedings, feeding off the inherent stupidity of costumed heroes. It was a mildly entertaining comic book, but nothing more. 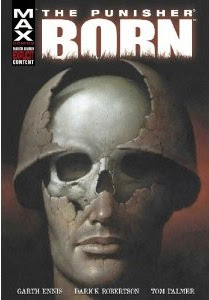 And then everything changed. In 2003, Marvel published a miniseries under their ‘mature readers’ imprint, Max: The Punisher: Born. Although it was once again written by Ennis, this was a radically different, bloodily realistic, foul-mouthed take on the character, following Frank Castle on his gruesome final ‘Nam tour and suggesting Castle was turning into the Punisher long before he watched his family die in Central Park. In fact, in this comic – and in a later one-shot, The Tyger, which examines an incident from Frank’s childhood – Ennis went so far as to suggest Castle was always destined to become the Punisher. As Frank himself states in The Tyger before his first mission as the Punisher, “They’ll blame it all on Vietnam. And they’ll be right. And they’ll be wrong.” 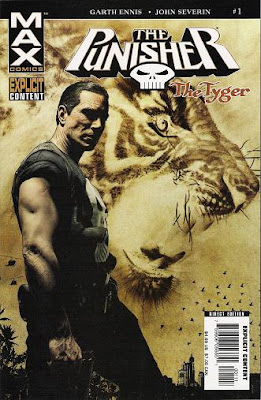 Evidently Ennis had discovered some dark truth at the heart of the Punisher, and the following year the main series was relaunched again, still written by Ennis but now under the Max imprint and minus any of the previous superhero trappings. Ennis started drilling down to the core of the character, presenting Frank Castle as a man almost totally lacking in humanity, only able to see the world in terms of black and white, driven by a need to kill criminals of any bent. That had always been the Punisher’s modus operandi, but Ennis took it further. Now Frank Castle had no real allies or friends (divesting himself of his only remaining one in the first arc), no ties to the rest of the human race; he was free to pursue his horrifically single-minded mission to murder. Each story arc took Castle ever further into the darkness, as he dispatched mobsters, gangsters, pimps, people traffickers – even, in one storyline, fatcat businessmen. He had become almost a force of nature, the “Tyger” of Blake’s poem.

It was as if Ennis was examining his blackest fears and deepest demons through Frank Castle, staring hard into the void, gazing dispassionately at a world that seemed to promise only madness and death. In the most recent issue, for instance (#49), a storyline about a group of mob widows who attempt to kill the Punisher climaxes with Castle naked, handcuffed to a bed and straddled by a brutally scarred kindred soul who, having tortured and killed her mob-wife sister and tormenter, the freshly slaughtered body still lying on the floor, punctuates their coupling by shooting herself in the head. 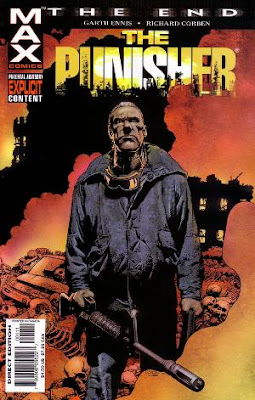 This line of enquiry reached its bleak apogee with the one-shot Punisher: The End. A nuclear holocaust has boiled the human race down to a single surviving enclave of the super-rich and super-powerful, ostensibly the architects of the apocalypse, buried in a bunker. But Frank Castle has also survived, and, dying from radiation poisoning, finds this one remaining outpost of humanity, the last hope for our species… and murders them all. It was the only logical conclusion to Ennis’ train of thought, the bleakest possible future ending to the (still ongoing) Punisher Max series.

And that, my friends, is why, right now, The Punisher is – to borrow a Fantastic Four tagline – The World’s Greatest Comic Magazine.
Posted by Nick Jones (Louis XIV, the Sun King) at 05:11