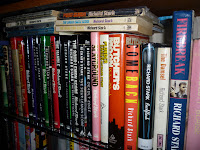 Niiiice. Lots of Allison & Busby editions of the Parker novels there, plus Coronet paperbacks on top, some Random House (Plunder Squad and Butcher's Moon)/Mysterious Press/Robert Hale editions on the near side, and a Hodder & Stoughton edition of the first Grofield novel, The Damsel, on the end there. (Amusingly, these days, if you google something like 'Richard Stark The Damsel' or 'Richard Stark Plunder Squad', Existential Ennui pops up in the top ten hits.) 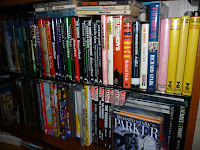 And a slightly wider view, with the first Modesty Blaise novel and the first three Fletch novels on the near end, Kingsley Amis firsts down the other end, and assorted graphic novels underneath.