Yes, we may be lumbered with a Conservative (and Liberal Democrat, although that's essentially the same thing these days) government, but we'll always have Paris. I mean we'll always have books. Not Paris. Paris is lovely, but it's irrelevant. I mean irrelevant to this post. Not irrelevant in a wider sense. Although it is to the Tories. But anyway. 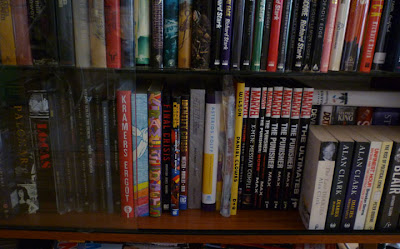 This is the shelf underneath my Highsmith and Stark (and Kingsley Amis) books. From left to right we have two big Love & Rockets hardbacks (Palomar and Locas, the first of which I bought in the famed Lambiek comic shop in Amsterdam I think); then some Joe Sacco graphic novels (Safe Area Gorazde among them); a couple of Michael Rabagliati Paul graphic novels; epic alt-comix anthology Kramers Ergot volumes 4 to 6; some DC Comics crossover Crisis collections (including the classic Crisis on Infinite Earths, a comic I absolutely loved when I was younger); a few Daniel Clowes books; and various Marvel hardcovers, including X-Men: Messiah Complex, which is probably the best post-Morrison X-Men story. And then at the back a few hardback novels (including Stephen King's The Stand) and some political tomes, Alan Clark's brilliant Diaries among them (there are more political memoirs and the like behind the books on the top shelf). 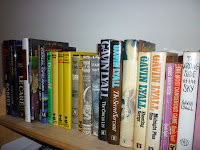 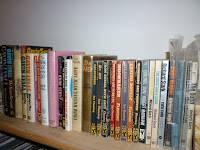