And what a bonanza it was. The girlf and I took a trip over to Camilla's bookshop in Eastbourne at the weekend, going further along the coast to Hastings first to check out a couple of bookshops there. One of those was heaving with tatty paperbacks but not really anything of interest, and the other was shut. Well, the lights were on, and the owner was drifting about inside with a glass of wine in his hand, but when I tried to go in he shook his head solemnly. Bernard Black is alive and well and living in Hastings it seems. What's the point of having a bookshop if you're not gonna let people in to have a look? No wonder second hand bookshops are dying on their arses. Silly old prick.

Anyway, after that we headed back to Eastbourne and spent a happy hour in Camilla's. If you've never been there it has to be seen to be believed. Three or so floors absolutely crammed with old books, on shelves, piled on the floor, everywhere. In fact on the ground floor there's a pile of books taller than me and almost as wide again, with notes stuck on it not to touch in case it collapses. It's almost like an art installation. Here's a photo of the place off the web: 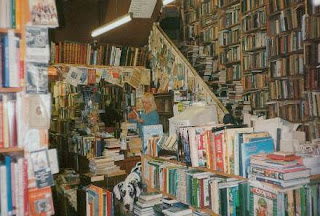 Suffice it to say it's even more crammed with books now. But unlike a lot of ramshackle bookshops (and the book/art installation on the ground floor aside), you can actually see most of the books, even if it means moving the odd pile out of the way. Also the staff are usually quite friendly, which isn't always (often?) the case in this type of over-filled bookshop. Rachel was initially disappointed that the only Agatha Christie books on offer, down in the basement, were all sans jackets, but I moved aside some books on the shelves running up the staircase up to the first floor and found a load more there, so she came away with a bag full of firsts.

I spotted various interesting things on the shelves up the stairs, which house the fiction. And then down in the basement, where there's even more fiction, I came across a couple of Gavin Lyall first editions. Then a second look at the stairs shelves turned up some more Lyalls I'd missed first time round. So I grabbed the lot.

Gavin Lyall, for those who don't know, was a British thriller writer (and former RAF pilot), active from the 1960s to the end of the century. Like a lot of 20th Century thriller writers he's largely forgotten these days, which is a shame, as his books are cracking reads – among his fans could be counted the likes of Kingsley Amis and P. G. Wodehouse (and possibly my mum; when she saw one of his books on my shelf recently on a visit she was pleasantly surprised). Lyall's early novels were aviation thrillers for the most part, written in the first person and featuring hard-bitten pilot tough guys as their 'heroes'. Later, into the 1980s, Lyall started writing in the third person and created the character Harry Maxim for a series of espionage thrillers, the first book of which, The Secret Servant, was initially written as a pilot for a TV series starring Charles Dance (which I don't think I've seen).

So what did I get at Camilla's? I done got these: 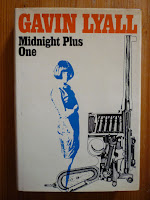 A 1965 hardback first edition of Lyall's third novel, Midnight Plus One, published by Hodder and Stoughton; 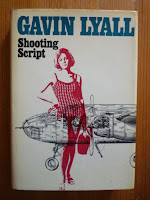 A 1966 first edition hardback of his fourth novel, Shooting Script, again published by Hodder (looking forward to reading this one, as it shakes up the aviation action with the addition of a plot about making a movie; also, I'd like to find out who did the killer jacket designs for these two, as it doesn't say in the books); 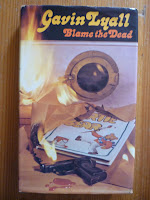 A 1972 first hardback edition of Lyall's sixth novel, Blame the Dead, Hodder again, and with a photographic jacket by Clive Andrews; 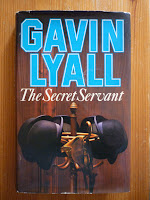 A 1980 first edition hardback of the debut Harry Maxim novel, The Secret Servant, Hodder once more, with a jacket design by Raymond Hawkey/photography by Peter Williams (I've wanted to get this one for a while, but despite it being tied to a TV series, you don't see proper first editions around that much; usually they're Book Club editions, which, as we all know, just Ain't the Same Thing); 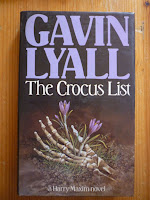 And a 1985 first edition hardback of the third Harry Maxim novel, The Crocus List. So, a nice bunch of additions to the Lyall books I already own, namely: 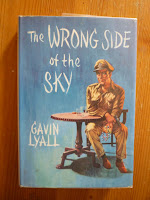 A 1961 first hardback edition of his debut novel, The Wrong Side of Sky (Hodder once again – and I'd love to know who painted that cover; it's a neat summation of Lyall's early oeuvre); 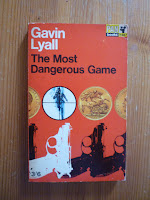 A 1965 Pan paperback edition of his second novel, The Most Dangerous Game (first published by Hodder in 1964); 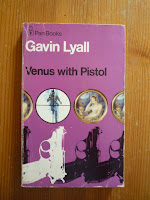 And a 1971 Pan paperback of Lyall's fifth novel, Venus with Pistols (originally published by Hodder in 1969). I like the design of these Lyall Pan editions, but I'll doubtless keep my eye out for first editions. And having acquired five Lyalls in Eastbourne, that doesn't leave an awful lot left from his backlist for me to track down: only 1975's Judas Country, the two other Harry Maxim books, and his four later historical thrillers. Mind you, I'm still working my way through Richard Stark's Parker novels at the moment (currently on Parker #8, The Handle), and I've got a good number of Patricia Highsmith books to read yet too, so I've got quite enough to be getting on with.

Maybe just a quick look on AbeBooks though... Can't hurt, can it?
Posted by Nick Jones (Louis XIV, the Sun King) at 09:57