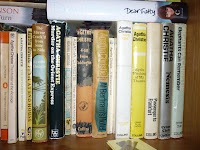 Lovely. Back to my shelves. From the top: (Well, nearly the top; the very top shelf has got CDs on it. Chaos!) All fairly self-explanatory. And the next shelf down: 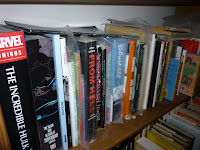 And the next one: 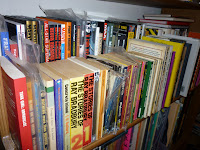 Nice bit of double-stacking there, I think you'll agree. Those Marvel hardback graphic novels sticking up at the back are the first couple of collections of Ed Brubaker's Captain America. There's also a French collection of Jim Woodring's Frank nearest to us, next to another Paul graphic novel (see previous post), which is obviously in the wrong place. Jesus. In the front row are some Jim Thompson paperbacks (you can just about see The Killer Inside Me and Nothing More Than Murder), various other paperbacks, a first edition hardback of Brian Aldiss' book about science fiction, Billion Year Spree (the yellow cover down the other end), and, nearest to us, a novel I actually edited – Tank Girl: Armadillo. Next! 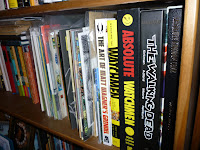 And the bottom one: 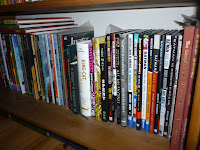 And now, full frontal shots (phwoar, slight return) of the top two and bottom two shelves, but not the middle one, which I inexplicably forgot to photograph. Top two shelves: 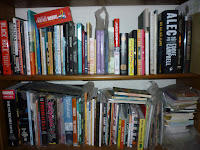 Looking a little disorderly there. Possibly could do with another tidy. And finally, the bottom two shelves: 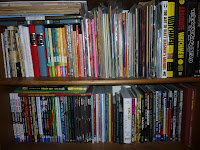 On the upper shelf there we have some old Marvel Treasury Editions sitting on the top (including Kirby's 2001: A Space Odyssey adaptation); the two collections of Chris Ware's sketches; lots of Fantagraphics' indie Mome anthology; and all sorts of magazine-size comics, including all the A4 copies of the brilliant British anthology Escape (the A5 ones are on the lower shelf in the previous picture). And on the lower shelf, Superman/Batman graphic novels (the whole of the Jeph Loeb run, which I really liked, so ner); Alan Moore's Top Ten hardbacks; various other DC hardbacks; lots of books by Norwegian cartoonist Jason; the whole run of Lucifer graphic novels (I also have the original comics, saddo that I am); a few more indie things, some more DC stuff, and right on the end, Joe Matt's first oversized hardcover Peep Show collection. Marvellous. Any questions, see me after.