Peril for the Guy by John Kennett, a Lewes Bonfire Book Bargain

Guy Fawkes Night, or Bonfire as it's known locally, is a big deal here in Lewes. Each November the 5th (or, as it is this year, the 4th; Bonfire never takes place on a Sunday) thousands line the streets to witness the six bonfire societies – whose memberships number in the many hundreds – and visiting societies from across Sussex parade around the town in a cavalcade of flames and firecrackers, costumes and pageantry, tableaux (the term for the huge, topical – often controversially so – papier-mache effigies the societies build and then blow up) and centuries-old tradition, culminating in the ritual exploding of the Pope and subsequent firework displays at six fire sites dotted around town.

How apposite, then, that in a Lewes charity shop I should come across this: 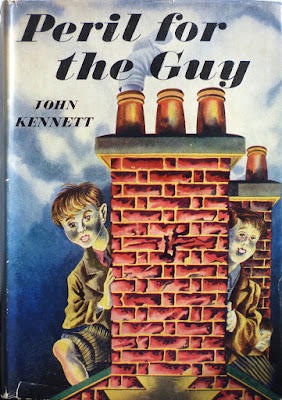 A first edition of Peril for the Guy by John Kennett, published by Brockhampton Press in 1955, dust jacket and interior illustrations by Stuart Boyle (who also illustrated Evelyn Waugh's The Loved One, and whose daughter Catherine Brighton is herself an illustrator). A children's adventure novel about young Kim Hunter and his four friends – the 'Black Circle' Gang – who set out to collect 'pennies for the guy' but wind up falling foul of the sinister Colonel Hugo Cannon, I suppose its main claim to fame these days is that it became a Children's Film Foundation production the year after publication, directed by James Hill, starring Fraser Hines – later of Doctor Who and Emmerdale – and now available to view in its entirety on the BFI website. 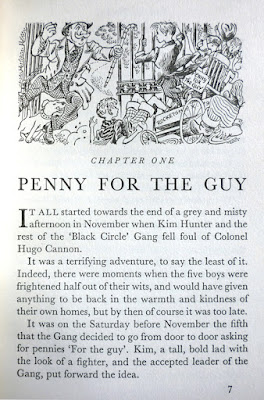 Kennett didn't write that film adaptation, but he did write or edit around fifty other books for children – history and biography as well as fiction – including two sequels to Peril for Guy: Walk into Peril, 1957, and Peril All the Way, 1959. He was also a teacher at Knebworth County Primary School in Hertfordshire, a former pupil of which establishment recalls that mention of the film adaptation of Peril for the Guy was for some reason taboo. 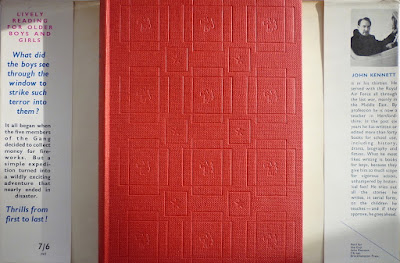 Whatever objections Kennett may have had to the film, they evidently didn't prevent him from signing this copy of the novel on its front free endpaper in the same year the adaptation was released: 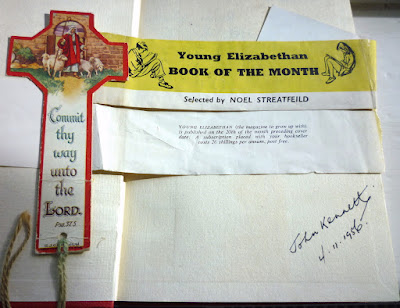 How this first of Peril for the Guy – the only signed copy I know of, and an uncommon book in either its 1955 Brockhampton Press edition or its 1973 White Lion reissue – wound up in a Lewes charity shop I couldn't say; the curious religious bookmark that was slipped inside its pages might be a clue, or more likely the inscription on the reverse of the front endpaper: 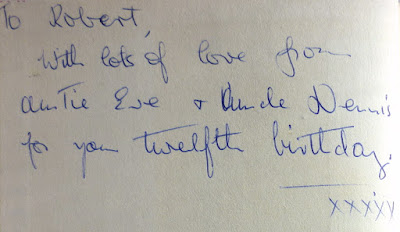 To a Robert from his Auntie Eve and Uncle Dennis on the occasion of his twelfth birthday. One to ponder over the weekend, perhaps, as Lewes once more bursts into flames. 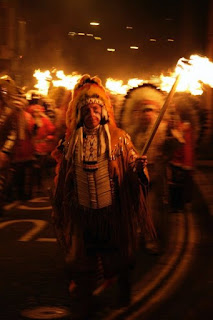 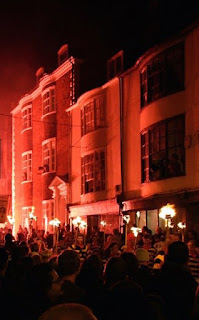