Heretofore I've only ever written about Victor Canning – a prolific British author who penned sixty-one books in total, mostly novels, many of them thrillers, but also children's books and non-fiction – in tangential fashion, largely in relation to the recently departed Val Biro, who designed the wrappers for four of Canning's novels in the 1950s and '60s. But for reasons I'll go into shortly Canning has loomed larger in my thoughts of late, and so I was quite chuffed when on a visit to Badger's Books in Worthing I spied this on the shelves: A first edition of The Kingsford Mark, Canning's 36th novel, published by Heinemann in 1975 under a photographic dust jacket credited to Peter Phipp, which I've deposited in the Existential Ennui British Thriller Book Cover Design of the 1970s and 1980s gallery, even though I'm not sure if the novel is, strictly speaking, a thriller; plainly in the styling of the wrapper – an arrangement of suitably mysterious and intriguing props; see also here, here, here, here, etc. – Heinemann were aiming the book at the thriller/crime audience. Irrespective of whether one would classify it as a thriller, however, the story, in which a young man (with his aunt) goes to stay at the country pile of squire John Kingsford, whom he believes to be his father and with whom he becomes in embroiled in an assassination plot, does sound interesting; but in fact the reason I decided to plonk down the £4.50 asking price was more to do with what's on the title page: 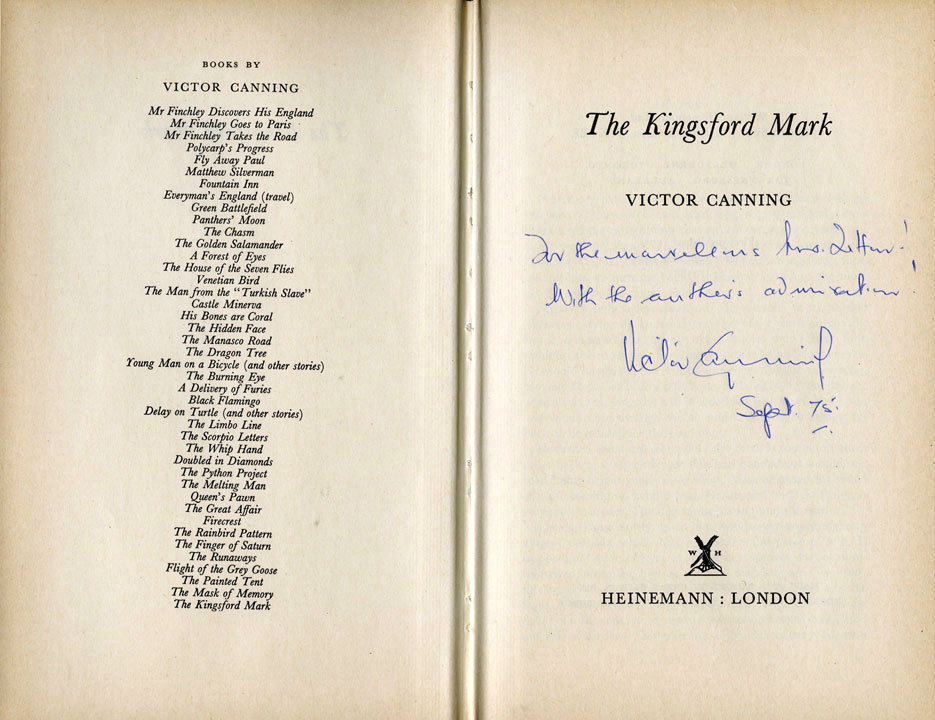 It's signed and inscribed, "For the marvellous Mrs. Gifford!" – possibly; I can't make out the name – "With the author's admiration! Victor Canning, Sept. 75." I suspect Badger's Books might not have grasped quite what they had on their hands, hence the low asking price; Canning's signature isn't instantly recognisable, so perhaps it was dismissed as an owner inscription rather than an author one. I must admit that at the time I too almost dismissed it as such, but then realised what it might be and decided to take a chance on it. I've since ascertained that it is indeed Canning's hand – I have something to compare it to, which I'll reveal down the line – and that signed Canning books are very uncommon: I can only see four such items on AbeBooks at present. 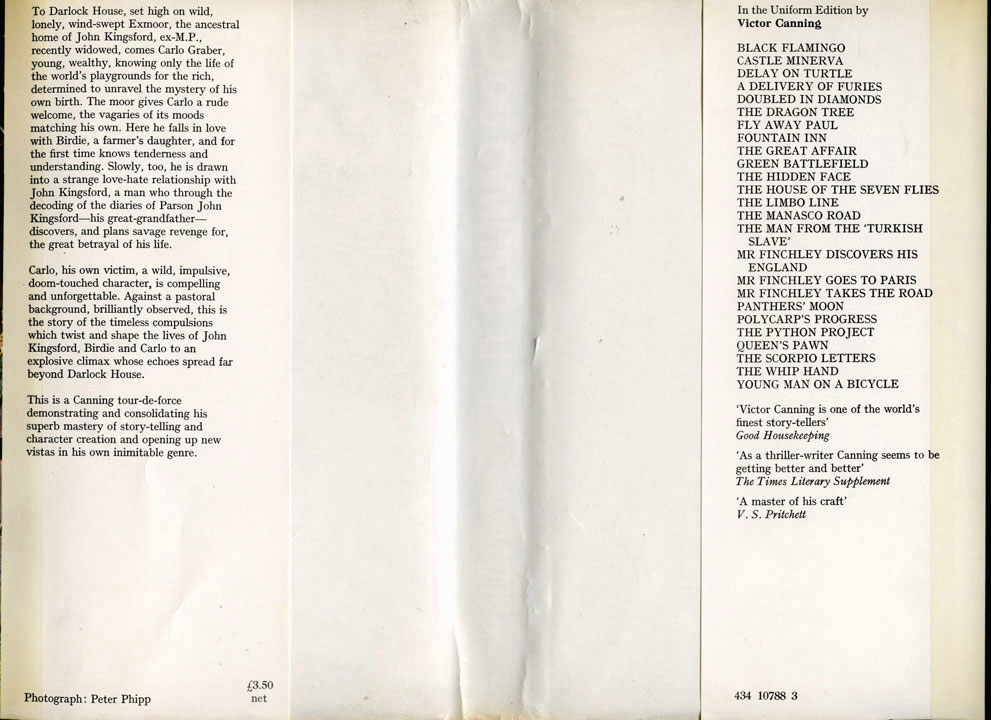 By far the best place on the web to read about The Kingsford Mark, and Victor Canning in general, is John Higgins's Victor Canning pages, which is the kind of exhaustive site one wishes all forgotten, overlooked or otherwise under-appreciated authors could lay claim to. John left a comment on my Val Biro/Victor Canning post back in 2012 and I've been dipping in and out of his site ever since. I've become especially interested in Canning's "Birdcage" books, a series of espionage novels Canning wrote in the latter stages of his life and career centring on the activities of a nefarious government dirty tricks department – a series which John actually answered questions on on Mastermind in 2009. The Kingsford Mark, as John notes in his entry on the novel, "is not a Birdcage book, but the authority figures, Wardle and Grainger, have a great deal in common with the Birdcage secret department which features in most of the other thrillers Canning wrote in the 1970s and '80s". And I'll be exploring some of those thrillers over the course of forthcoming posts. 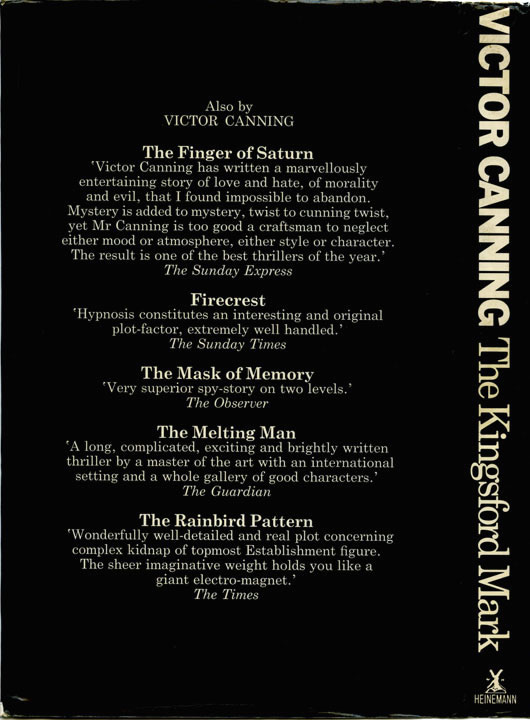