I delved into Simon Harvester's backlist a bit in the previous post – a full Harvester bibliography can also be found there (the first time to my knowledge one has been made available online) – but I want to concentrate here on the twelve "Road" novels he published late in his career (and life; Harvester – or rather Henry St. John Clair Rumbold-Gibbs, to give him his real name – died in 1975) starring British Intelligence operative Dorian Silk, the first of which is this: 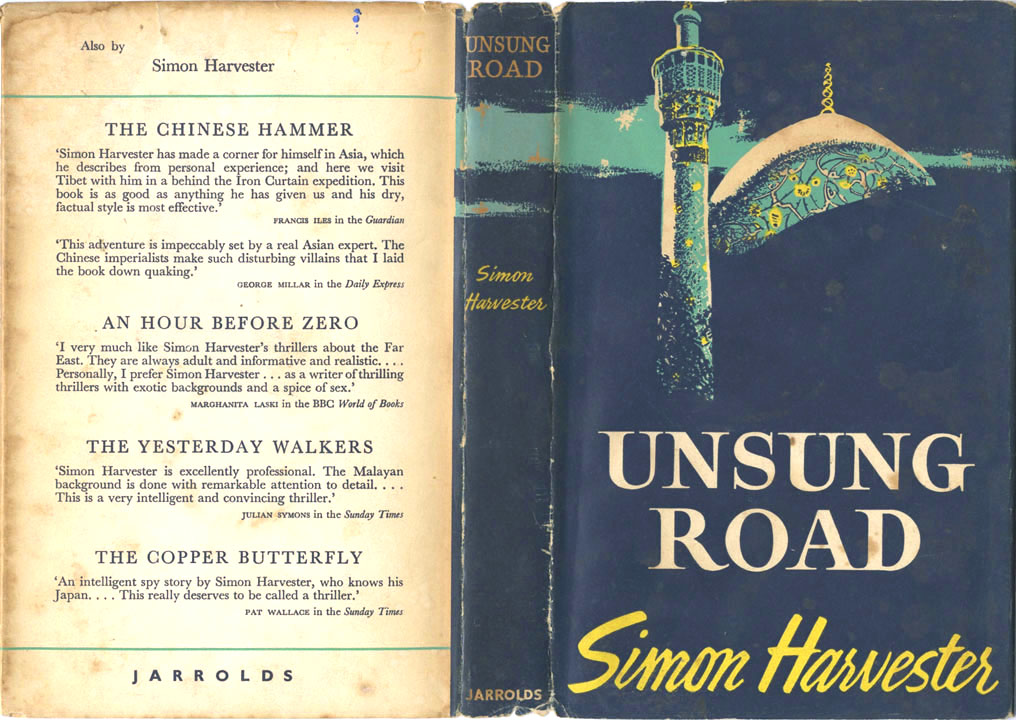 Unsung Road, published in 1960 by Jarrolds under a dust jacket designed by Harvester himself – more on that below. Harvester's 29th novel – under that name; as Henry Gibbs he published many more – Unsung Road introduces Silk as an iconoclastic secret agent, not much enamoured of his colleagues and prone to issuing sarcastic putdowns accordingly. Silk has been assigned to Iran – a country he knows well – to assist fellow agent Woolf – whom he detests – in investigating the disappearance of one of Woolf's contacts, Ahmad Fath – "a minor job", as Silk puts it, imploring of his superior, Swann: "Why not just kill me?" 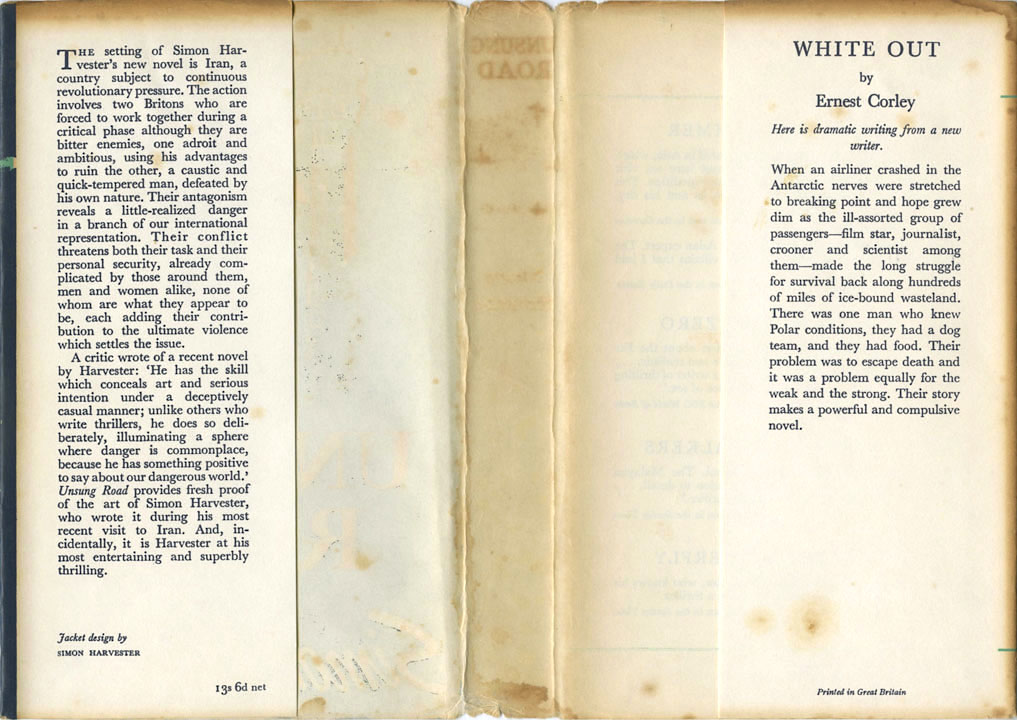 There's a deeper mystery at play here, but even the general shape of it isn't really defined until two thirds of the way into the book, by which point I must admit I'd rather lost the plot – or it had lost me; one or the other. Silk does stuff, and stuff is done to him, including the obligatory (for spy thrillers) battering and sousing – after which he's rescued by a dusky Iranian maiden who proves central to the story – but it's hard to care when for most of the novel you have no idea what Silk's purpose in all this is. Snappy comebacks and pithy rejoinders, good as some of them are – one of my favourites comes when Silk identifies himself to a stranger as "Drummond. Bulldog Drummond", while at the novel's climactic cave shootout, displaying the ruthless side of his nature he asks of an assailant, "Going on holiday?", shoots the man in the head and adds, "Quicker that way" – only get you so far in a thriller. (The oblique jacket flap copy suggests that the copywriter wasn't entirely certain what the novel was about either.) Additionally, Harvester is very much a stylist, and so your appreciation of what he does and your willingness to stay the course will depend on your response to descriptive passages like this:

Another chandelier leaped into florid malevolence. Its lustres hung thicker than lottery tickets draped on a Spanish beggar. The room was a big square well. Its dark furniture had the loveless appearance of a suburban junk-shop window. The post-uxorious Woolf had stuck photographs of his wives on a mantelpiece above an electric fire. For no reason of grief or taste each photograph was flanked by a silver candelabrum. The candles were a gruesome bluish pink. Their fat glisteny sides were tumoured with dribbles like preserved crocodile tears accumulated in orgies of public woe. Between their indecency an ormula clock recorded the enemy march. Over the sideboard a stylized print showed a thin flamingo watching a plump maiden in white gauze trousers and an indigo robe pick daisies near a frothy brook. On a ledge in one corner stood a portable radio.

Personally that kind of thing had me longing for the stripped back, bare bones descriptive prose of rather different sorts of stylists – Richard Stark, say, or Elmore Leonard – but maybe I just wasn't in the right mood; reading that paragraph again now I can better appreciate the rhythm of the writing and see the appeal of a sentence like "Their fat glisteny sides were tumoured with dribbles like preserved crocodile tears accumulated in orgies of public woe", or the later "Lethargic flies circled the abominable chandelier listless as a ballet company at six a.m. after an all-night rehearsal, out on their points." Certainly Randall Masteller of Spy Guys & Gals rates the Silk series as a whole very highly – and where I do agree with Masteller is that Harvester is excellent on locale, conjuring up a convincing Iran over the course of the book. 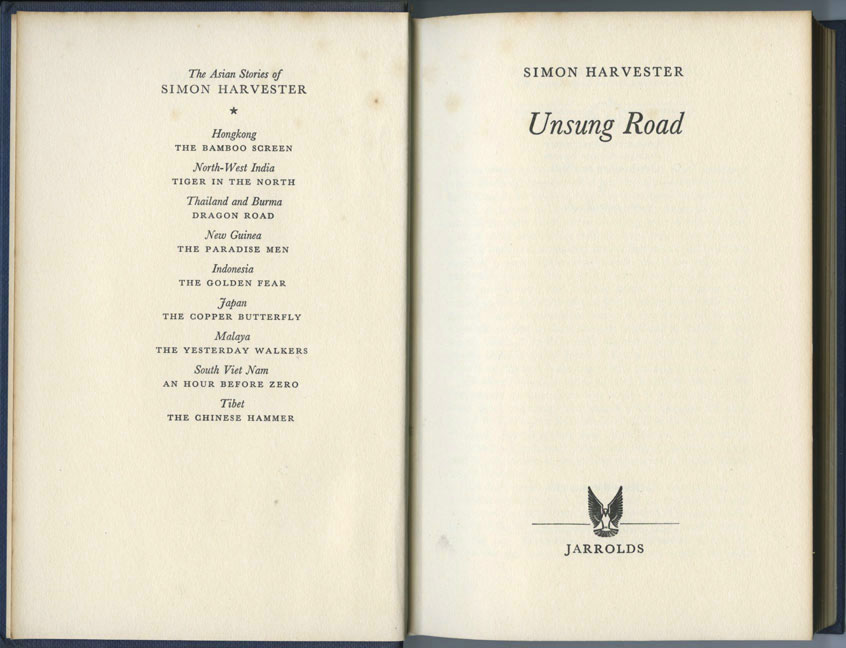 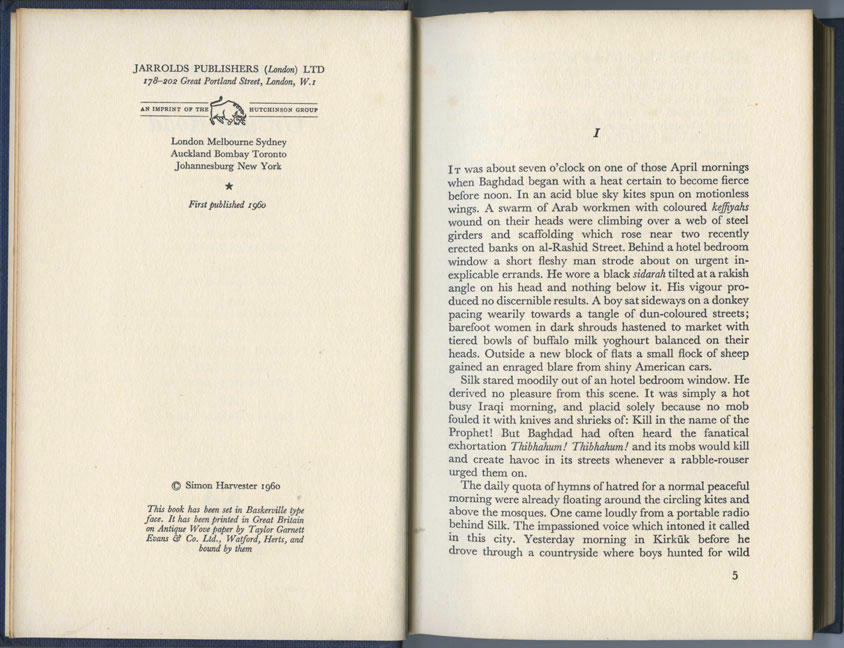 On balance, then, I think I will saunter a little further down Dorian Silk's "Road" – a few more yards along it anyway. Apart from anything I feel slightly obliged to now, as I've acquired first editions of the three subsequent Silks from book dealer Jamie Sturgeon. Simon Harvester firsts aren't easy to come by (even ex-library copies) so I couldn't resist when I realised Jamie had these ones, especially since two of them, Silk Road and Red Road, also sport splendid dust jackets designed by Harvester, who was evidently a talented artist and illustrator as well as writer; he designed the wrappers of quite a number of his own books (sometimes signing them as Henry Gibbs). I hope to have further examples of his dust jacket work to show soon, but for now, below are the wrappers of the aforementioned Silk Road and Red Road – plus the wrapper of the fourth Silk, Assassins Road, which was designed by Oliver Elmes – illustrating a Dorian Silk "Road" bibliography. (I've also added all three, and Unsung Road, to the Existential Ennui Beautiful British Book Jacket Design of the 1950s and 1960s page.) 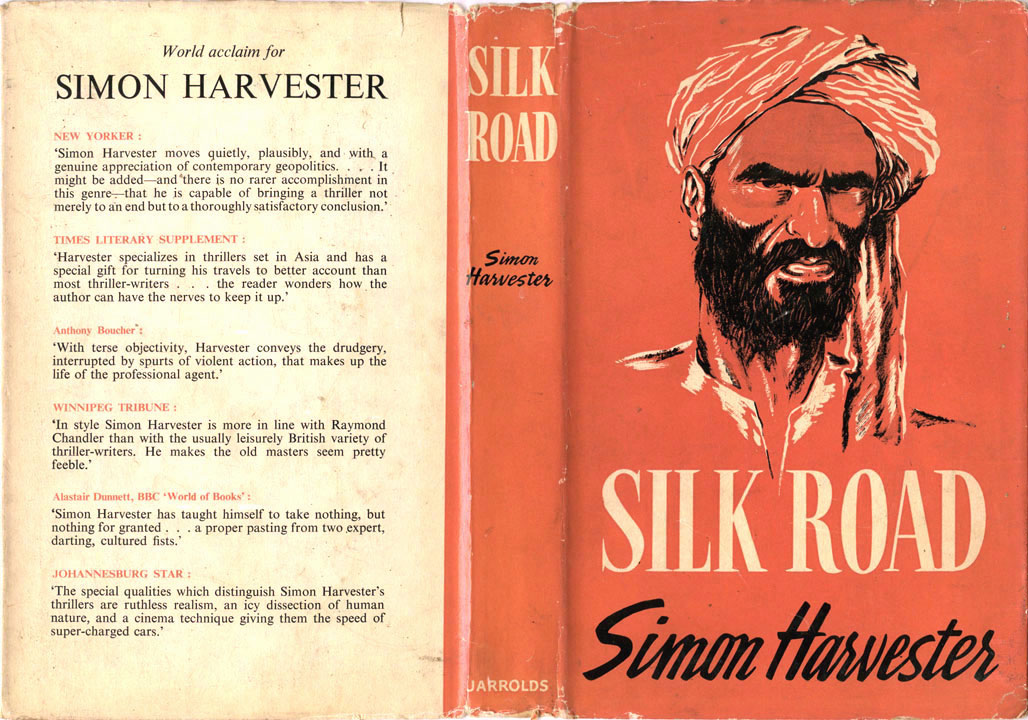 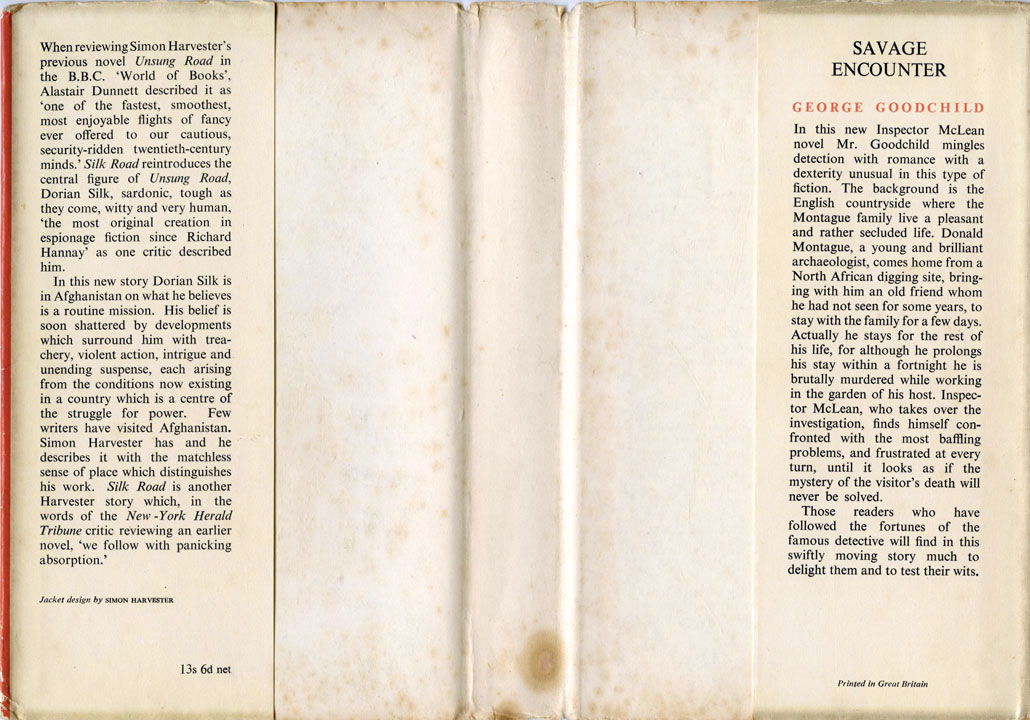 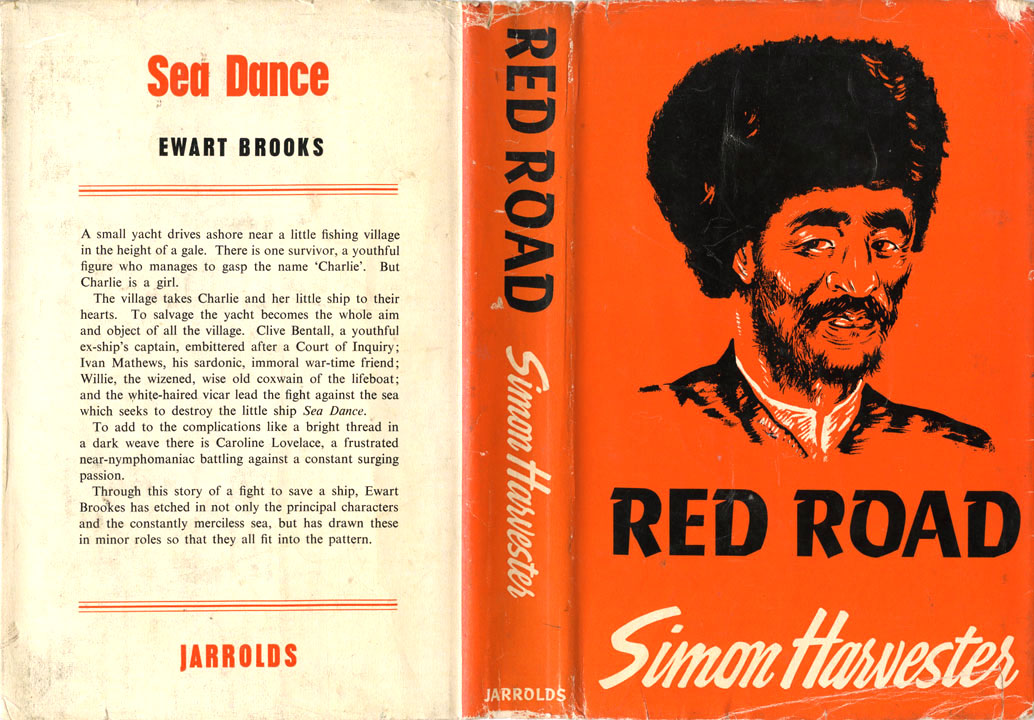 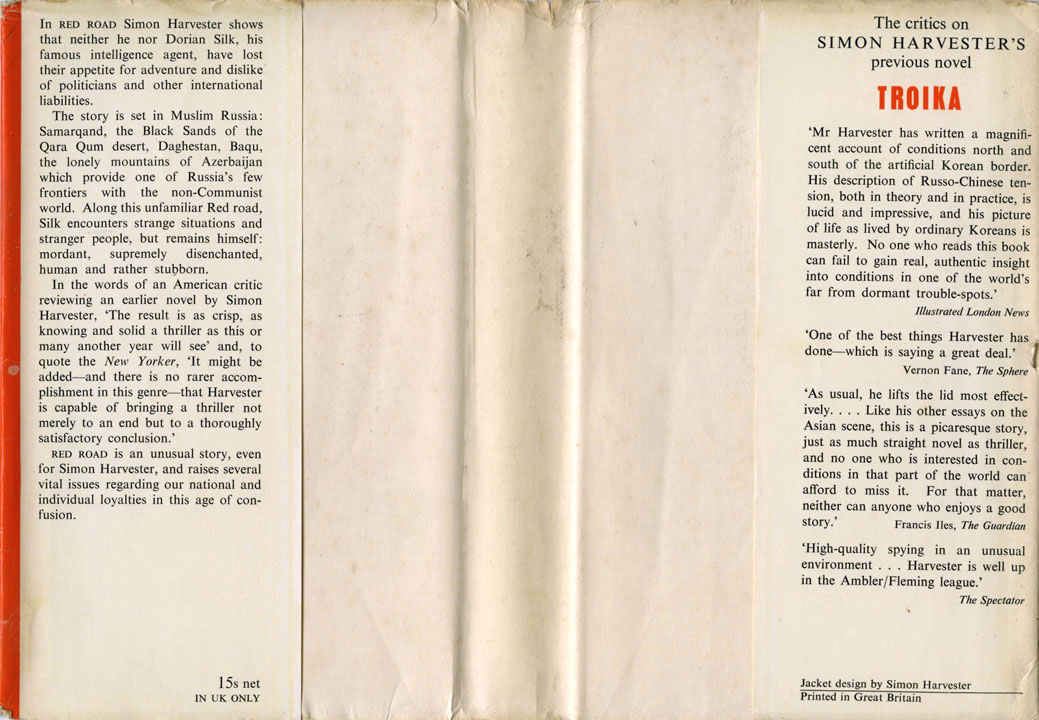 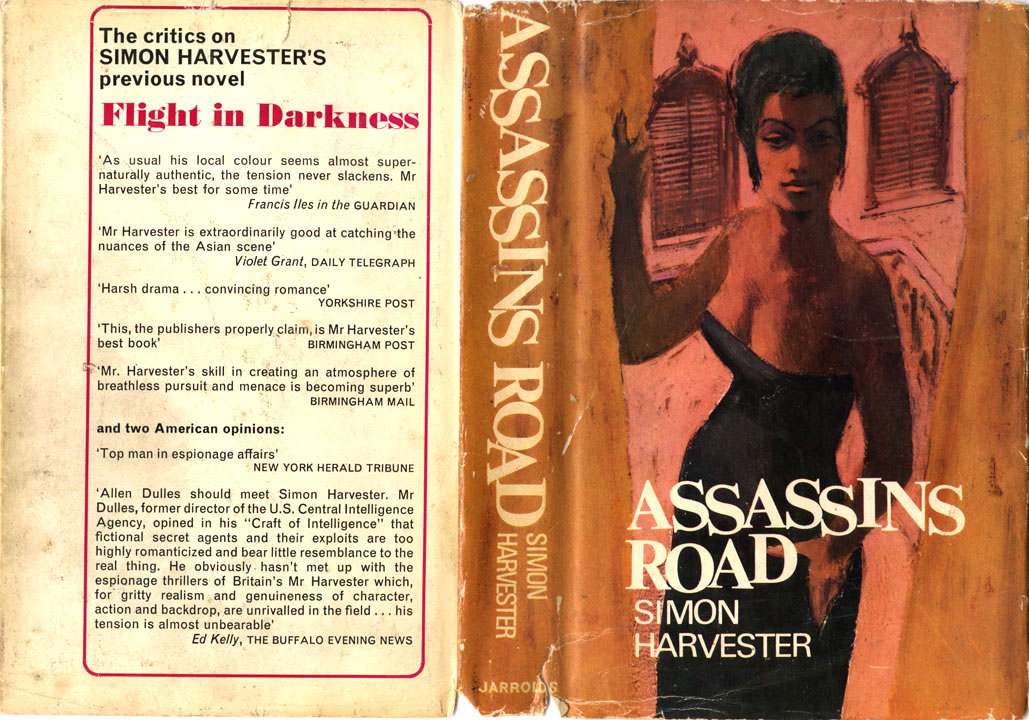 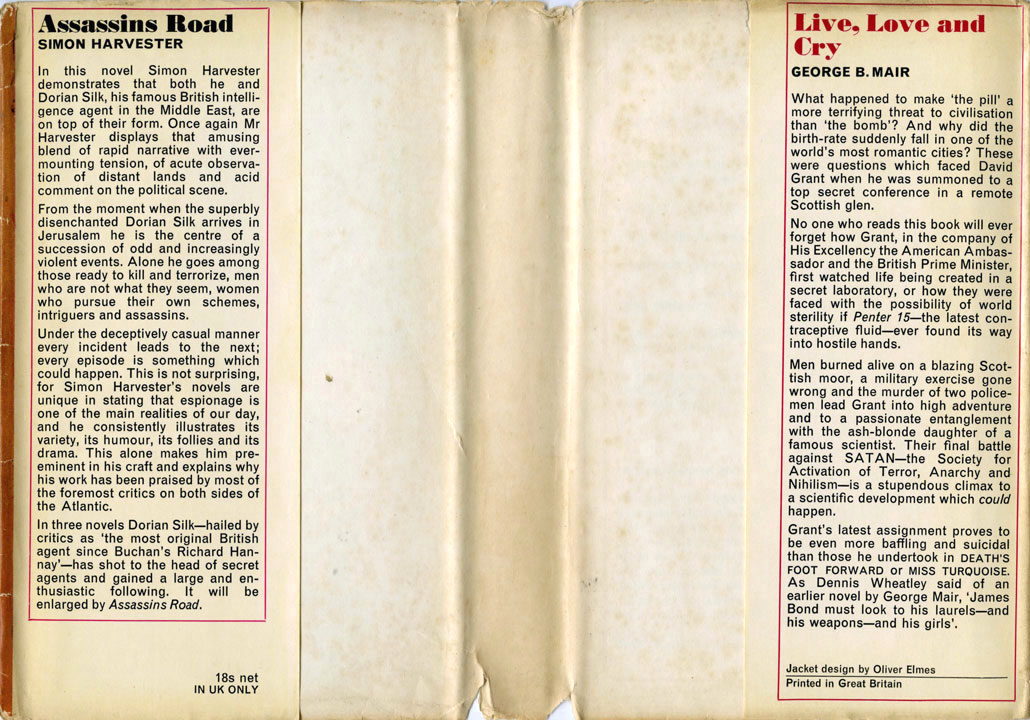