I made a mental note last October, when I finished reading A Magnum for Schneider, the excellent first book in James Mitchell's five-book Callan spy thriller series – which span out of the Mitchell-created Callan TV series – not to leave it too long before trying the second one, Russian Roulette. Mostly that was because I hugely enjoyed A Magnum for Schneider (alias A Red File for Callan) – it wound up taking the number two spot in my 2013 year-end top ten – but also because I knew that Mike Ripley had reissued both books that October under his Top Notch Thrillers imprint, and I like to lend a hand – in however minor a capacity – in Mike's tireless efforts to resurrect overlooked old thrillers whenever I can. In the event, it's taken me five months to get round to Russian Roulette, which probably isn't of much use to Mike in promoting his new edition of the novel – I'd have been better off reviewing the third Callan book, Death and Bright Water, which I believe Mike is reissuing sometime over the next month – but actually isn't bad for me: I've been known to let years elapse between reading instalments in a series of novels. 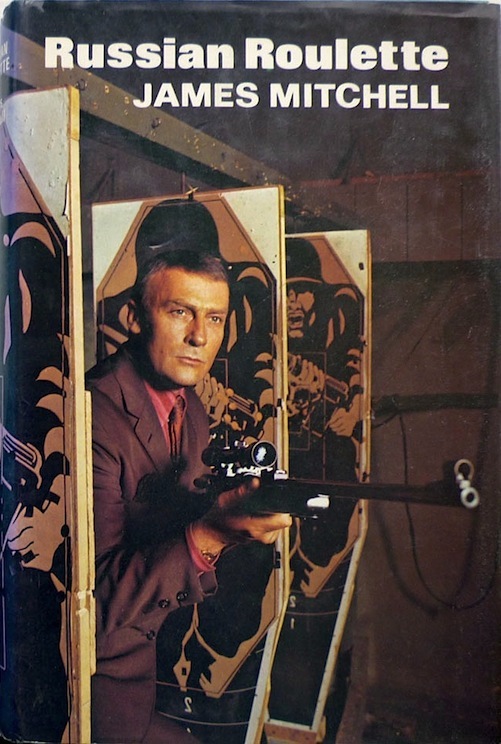 Russian Roulette was first published in hardback in 1973 – under a dust jacket sporting a gloriously '70s photograph of Edward Woodward as Callan, taken by glamour snapper and one-time Existential Ennui obsession Beverley le Barrow (here credited in the traditional Hamilton fashion as Beverly Lebarrow) – by Hamish Hamilton – a change of publisher from the first book, which was issued by Herbert Jenkins in 1969. Accordingly, Hamilton make very little of this being a sequel – there's a mention of A Red File for Callan on the jacket back flap and under "Other books by James Mitchell" in the prelims, but that's about it. Mind you, neither does Mitchell: as the novel opens, working class assassin David Callan is once more happily ensconced in the bosom of British Intelligence dirty tricks department the Section, with nary a mention of his being temporarily booted out by his boss, the supercilious Hunter, in A Magnum for Schneider.

It's ironic, then, that Russian Roulette once more sees Callan being kicked out of the Section, this time because Hunter has offered him up to the Russians in exchange for British Intelligence's "top man in Russia", who's been nabbed by the Soviets. To compound Callan's problems, not only does he have a specially imported KGB death squad on his tail, and not only has Hunter blocked any means of his obtaining a gun – right down to freezing his current account and even stealing his most valuable model soldiers (Callan is an enthusiastic wargamer) so that he can't sell them – but Callan's eyesight is failing too. All of which means he's forced to turn for assistance to his only friend, the odoriferous thief Lonely. 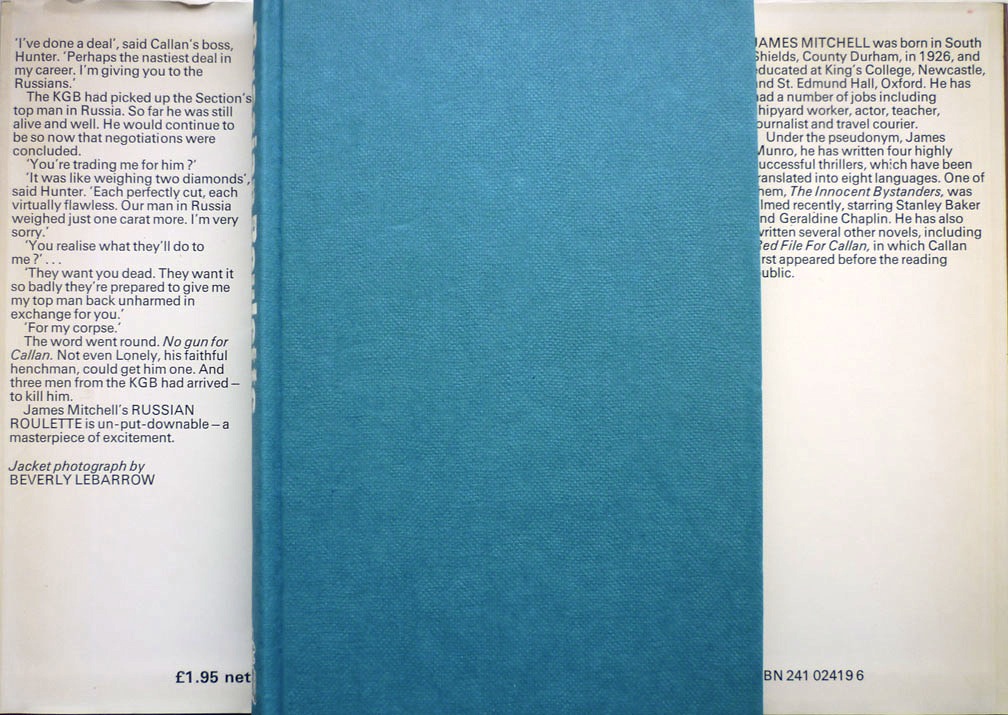 Whereas in A Magnum for Schneider the relationship between Lonely and Callan was mostly based on the former's fear of the latter, here it seems to have developed into a genuine friendship. Lonely is still scared of Callan, but then Lonely is scared of pretty much everything; he's happy to call Callan a proper mate, which is a change from his professed hatred of his erstwhile prison cellmate in the first book. And that bond is certainly tested in Russian Roulette: Callan asks things of Lonely that even the firmest of friends would balk at, and Lonely pays a terrible price for standing by him, as Callan is beset by a trio of KGB killers and betrayed by Hunter, by his fellow Section assassin Meres – in fact by almost everyone he gets close to. 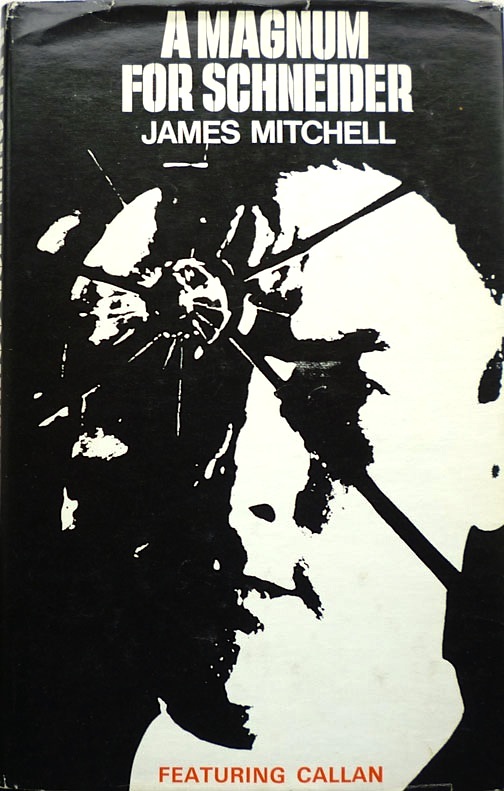 Mitchell's characterisation is as surefooted as that in A Magnum for Schneider – not just Callan, who remains a convincingly common-as-muck lead, owing a small debt to Len Deighton's nameless operative but otherwise quite an original creation, but also the put-upon Lonely, the various criminals they encounter (some related to Lonely) and Hunter and Meres, representing the Establishment/old boys network, from which Callan will forever be excluded. As in the first book Mitchell grounds the espionage action in a recognisable milieu of London cafes, boozers, building sites and grubby little flats, and if the hunter/hunted story isn't quite as compelling as that in the more confined, more focused, and thus more intense, A Magnum for Schneider, Russian Roulette still rates as a very good vintage spy thriller indeed. 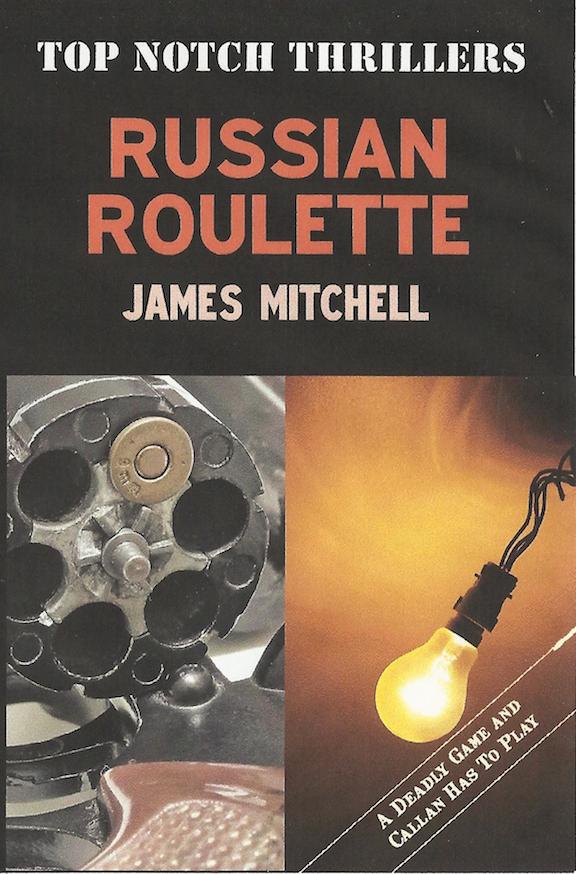 I showcased first editions of almost all of the Callan novels in my series of posts on Mitchell last year, as well as firsts of almost all of the John Craig spy novels Mitchell wrote under the alias James Munro. Back then, however, in both cases I was missing one book from each series. No longer: in the interim I've come into possession of first editions of those absent titles – so I thought I'd take a look at them in the next post.
Posted by Nick Jones (Louis XIV, the Sun King) at 08:00