When I noted at the start of my review of spy novelist Anthony Price's fifth novel, Other Paths to Glory (Gollancz, 1974), in June of last year that it had "been a good six months since I last posted anything substantial about Anthony Price and his David Audley series of espionage novels", little did I realise that it would be another year-and-a-half before I returned to Mr. Price. The consequence, I suppose, of having a 'to-read' pile akin to, if not a mountain, then at least an impressive hillock – not to mention having a six-month-old daughter as well, I guess – but even so, the lack of any Price posts still represents a dreadful dereliction of duty, even if I have mentioned him in passing here and there (and exchanged the odd private letter with him too; oh I'm such a namedropper).

To make amends, then, I'm rounding off Existential Ennui's regular blogging for 2013 – yes, the traditional Existential Ennui festive piss-up--I mean, review of the year is almost upon us, God help us – with a pair of Anthony Price posts. There'll be a review of his sixth novel, Our Man in Camelot (Gollancz, 1975), up anon, but first I thought I'd showcase some of the first editions of his novels I've picked up over the last year or two (or three in some cases), not least because the dust jackets of these ones fit the bill for my recently established British Thriller Book Cover Design of the 1970s and 1980s gallery, and the addition of them to said gallery takes the number of book covers therein up to 120 (a total which almost rivals that of the original Existential Ennui gallery, Beautiful British Book Jacket Design of the 1950s and 1960s). And they are: 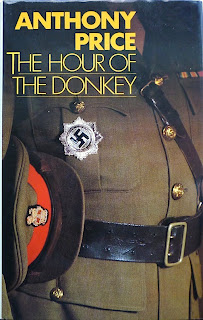 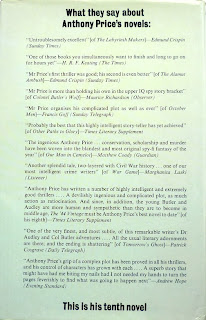 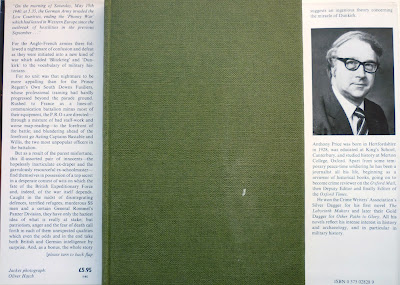 The Hour of the Donkey, published in hardback by Gollancz in 1980. The tenth novel in the nineteen-book David Audley series, it was the third to feature a pictorial dust jacket, as opposed to the initial seven Audley thrillers, all of which sported variations on the iconic – largely typographic – Gollancz yellow wrapper design. The striking jacket photograph is by Oliver Hatch, who was already represented in British Thriller Book Cover Design of the 1970s and 1980s by his jacket for the Price novel prior to this one, Tomorrow's Ghost (Gollancz, 1979). I have a feeling one of Hatch's photos appears on the front of the novel prior to that one too, The '44 Vintage (1978), but I don't own a copy of the Gollancz edition (I have a signed US edition instead) so I can't say for certain. I do, however, know that Mr. Hatch's work appears on the front of the novel subsequent to The Hour of the Donkey: 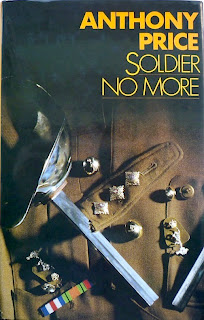 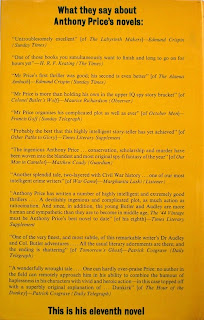 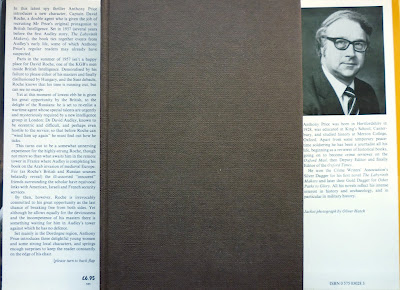 Soldier No More, the eleventh Audley thriller, published in hardback by Gollancz in 1981 – that much is evident from merely a glance at the cover. It's worth noting, by the way, that as with all the images in this post (and indeed all the images across Existential Ennui) you can see the front of the jacket at a larger size if you click on it, and read a synopsis of the plot if you click on the image of the case and jacket flaps. But it's worth clicking on the back cover too, I feel – on all the back covers in this post, in fact, as the notices for Price's novels carried thereon give a feel for how well-respected his work was (and still is, I hasten to add).

Skipping over the next Audley novel, The Old Vengeful (Gollancz, 1982) – I do own it, but its wrapper, featuring a Turner watercolour, is atypical both of thriller cover design of the era and of the Audley series itself at this juncture – we come to the thirteenth Audley outing: 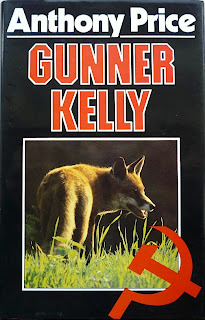 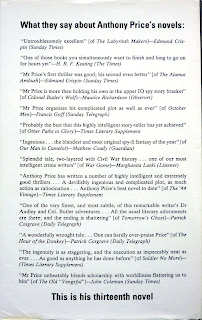 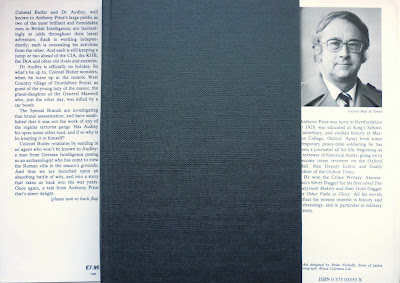 Gunner Kelly, published in hardback by Gollancz in 1983. The front cover photo is credited to Bruce Coleman Ltd., now known as Bruce Coleman Inc., a nature photography library which can be viewed here, but the jacket design is by Brian Nicholls, who also designed the wrapper of the 1983 Gollancz reissue of the second Audley novel, The Alamut Ambush (originally 1971), which I'd already included in British Thriller Book Cover Design of the 1970s and 1980s. Nicholls may well have also been responsible for the jackets of the last two Audley novels I'm showcasing here: 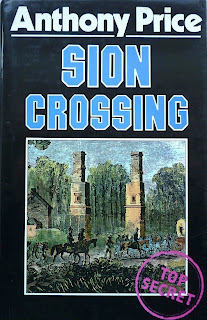 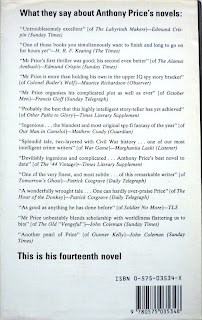 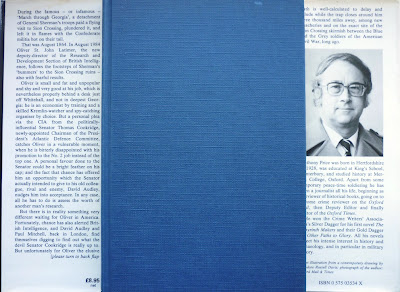 Sion Crossing, published in hardback by Gollancz in 1984, and: 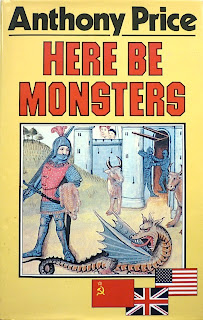 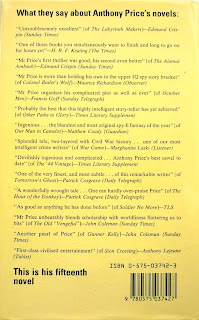 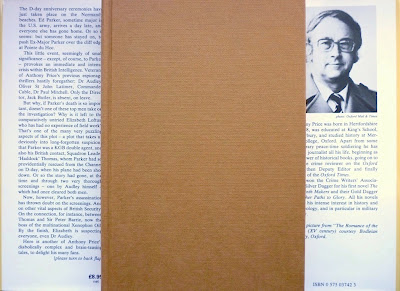 Here Be Monsters, published in hardback by Gollancz in 1985, but neither design is credited, merely the pictures on the front – respectively a nineteenth century drawing by Theodore Russell Davis and a fifteenth century illustration of The Romance of the Rose, the latter held by the Bodleian Library in Price's native Oxford. After this point the Gollancz jackets for Price's remaining four Audley novels took on a more typographic aspect, in a way mirroring those wrapping the Audley novels of the early to mid-1970s – novels such as 1975's Our Man in Camelot. (See what I did there...?)
Posted by Nick Jones (Louis XIV, the Sun King) at 05:00