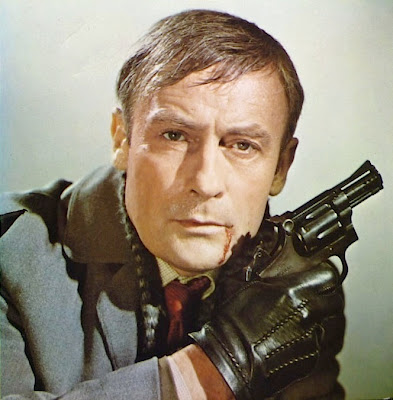 Last week saw the return to print after nearly forty years of the first two instalments in author and television writer James Mitchell's five-book spin-off series of novels from his Edward Woodward-starring TV series Callan, courtesy of Mike Ripley's Top Notch Thrillers imprint (not to mention their eBook debuts too). I reviewed the first of those, 1969's A Magnum for Schneider, alias A Red File for Callan (its US title), alias Callan (it was reissued by Corgi in 1974 to tie in with the Callan movie), originally published in the UK by Herbert Jenkins, on Friday; now I thought we could take a look at some of the other Callan first editions I've acquired, beginning with the second Callan novel: 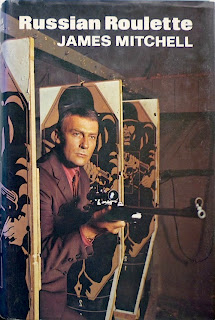 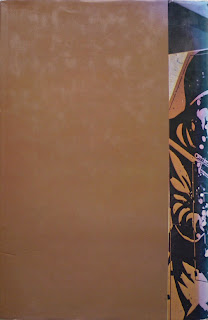 Russian Roulette, published in hardback by Hamish Hamilton in 1973, with a dust jacket photograph credited to Beverly Lebarrow, alias Beverley le Barrow, alias former glamour photographer Beverley Goodway – at least, I believe "Beverley le Barrow" to be an alias of Beverley Goodway; an anonymous commenter on my post about the James Bond Panther paperbacks begs to differ, despite the information presented in that post. Anyway, Russian Roulette was the other Callan novel reissued by Top Notch Thrillers last week, and sees recalcitrant assassin David Callan offered up to the Russians by his former employers at British Intelligence outfit the Section as a trade for a captured agent. 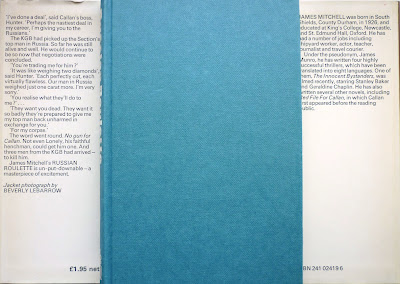 By the time Russian Roulette was originally published the Callan TV series had effectively ended (as mentioned above, it was revived for the big screen in 1974 – that film telling the same story as the 1967 Callan TV pilot and A Magnum for Schneider – and was further revived in 1981 as a TV movie). But James Mitchell had been a novelist longer than he'd been a television writer – his first novel, A Time for Murder, written under the pen name Patrick O McGuire, was published in 1955 by Hammond, whereas his debut television drama, the Armchair Theatre production Flight from Treason, adapted by Mitchell from his own novel (A Way Back, Peter Davies, 1959), was broadcast in 1960 – and so it was natural for him to extend Callan's life in the novel format. Which he did again in 1974: 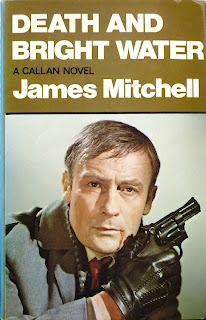 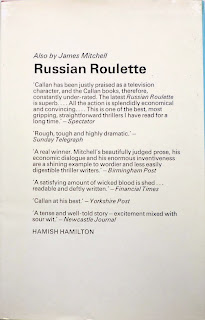 with Death and Bright Water, again published by Hamilton (dust jacket design uncredited, although the photo on the front is a publicity shot from the Callan movie), sending Callan "and the faithful, odoriferous Lonely", as the jacket flap copy puts it, to Crete. While British first editions of Russian Roulette are relatively easy to come by these days, British firsts of Death and Bright Water aren't quite so common, at least not in the UK; I can see just one (non ex-library) copy for sale online at present, although there are others available from Australian and American sellers. Oddly enough I've ended up with two copies of the Hamilton first – one bought in the late lamented Dim and Distant in Heathfield (now Tome in Eastbourne), one bought... for the life of me I can't remember where – so if anyone reading this is looking for one, drop me a line. 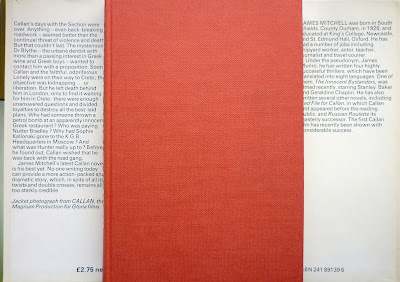 I have just the one copy of the Hamilton first of the next Callan novel, however, as it's in even shorter supply: 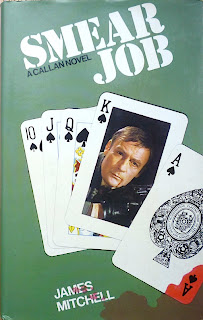 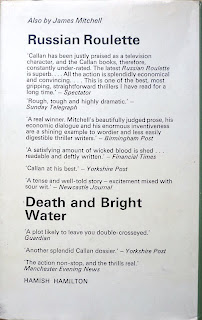 Smear Job, published by Hamilton in 1975, dust jacket design by Ken Reilly (incorporating the same promotional image from the Callan movie as Death and Bright Water). This one sees Callan and Lonely pursuing, according to the jacket flap copy, "quieter, if less lucrative careers in the world of personal security", an enterprise which takes them to Sicily, Las Vegas and Mexico. 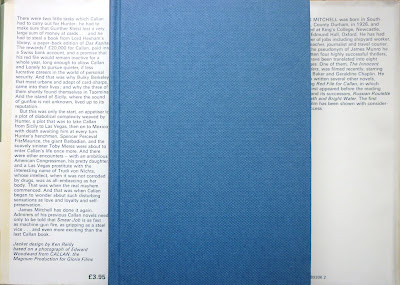 Smear Job was published on the eve of arguably Mitchell's greatest success, the TV drama When the Boat Comes In (starring fellow north easterner James Bolam), which was broadcast on BBC1 to huge audiences from January 1976 to April 1981. This and various other TV endeavours – Goodbye Darling (1981), Spyship (1983) – and around a dozen standalone novels kept him preoccupied for the next twenty-five years or so, but he made a belated return to Callan just before his death in 2002 with a fifth novel, Bonfire Night, published by Severn House. I haven't yet secured a copy of that one – I'll doubtless post it when I do – but I have secured a number of the spy novels Mitchell published in the 1960s, pre-Callan, written under the nom de plume James Munro and starring gunrunner-turned-secret agent John Craig...