I've a few posts planned on the various spy novels penned by author and television writer James Mitchell, beginning with this: 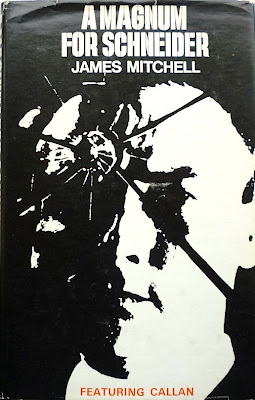 The 1969 Herbert Jenkins British first edition of A Magnum for Schneider (with a dust jacket designed by Ian Kestle), perhaps better known under its American title of A Red File for Callan – a title subsequently adopted – minus the "A" – for the British Corgi paperback edition. Callan, for those who don't know, was an ITV drama series which ran in the UK from 1967 to 1972 – with a big screen spin-off in 1974 and a one-off TV revival in 1981 – created by James Mitchell and starring Edward Woodward as David Callan, a reluctant assassin working for a section of British intelligence known as, er, "the section". I was a bit too young to have watched Callan at the time, but I was dimly aware of it being on telly when I was a kid (I guess either in repeat or via the 1981 TV movie), and so have that vague childish sense of it being something that was serious and adult and consequently, to my young mind, really boring.

These days, of course, a gloomy, murky espionage series starring a recalcitrant killer sounds right up my strasse, and I fully intend to investigate it on DVD at some point; but for right now, my exposure to Callan consists of A Magnum for Schneider, a terrific novel which Mitchell adapted from his own eponymous teleplay for Armchair Theatre (broadcast in early 1967 and effectively the pilot for the Callan TV series). As is explained early on in the story, Callan worked for the section for seven years before his conscience got in the way of his job and he was let go by Hunter, the head of the department. Since then Callan has been working as a bookkeeper for Waterman, a wholesale grocer, but Hunter has called Callan back in again with a chance of redemption: a red file – the section's colour code for the most dangerous subjects, those most likely to be offed – a man named Schneider, whom Hunter wants executed within the week. And it so happens Schneider's office is across the hall from Callan's. 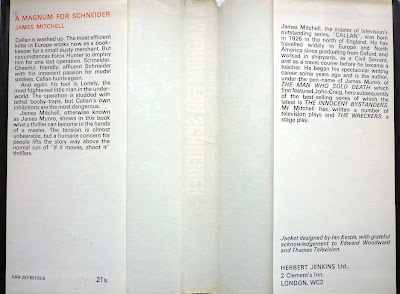 Not having seen the television version of A Magnum for Schneider I couldn't comment on how close the novel is to the Armchair Theatre production – although this telesnap synopsis suggests fairly close – but I'm given to understand that Mitchell considerably expanded on his teleplay, especially as regards Callan's background. We learn that Callan had been a commando in the jungles of Malaya, where he'd once single-handedly rescued a captain from the clutches of the enemy, killing all six opponents; that he'd twice lost his stripes for drunken brawling; and that, upon being demobbed, out of sheer boredom he'd robbed a supermarket and was subsequently sent down for two years.

It was in Wormwood Scrubs that he met Lonely, an odoriferous lowlife who fell under Callan's protection in prison, and who Callan now seeks out in order to purchase a gun. And it's here, in Callan's edgy exchanges with Lonely (who calls him "Mr. Callan", even though Lonely despises Callan), or his combative conversations with Hunter and Meres, a fellow assassin from the section, or his battles of wits with his irascible boss Waterman, or indeed his friendlier ones with Schneider (who he finds he quite likes) rather than in the scant sequences of action, where much of the appeal of the thing lies. For me, these passages are the most compelling parts of the book, and it's perhaps no accident that in their parry and thrust these encounters reflect Callan's only real passion: wargaming, i.e. the reenactment of historical battles with toy soldiers, a passion shared, oddly enough, by Schneider. (I wonder too if it was shared by James Mitchell. He wouldn't have been alone among thriller writers if so: Gavin Lyall was a committed wargamer, and even wrote a book about it.) (UPDATE, 28/11/13: Spy novelist and espionage aficionado Jeremy Duns just pointed out to me on Twitter that another thriller writer was an active wargamer too: Desmond Bagley.)

But another attraction of the novel – at least it will be for those of us who respond to this kind of stuff – is the milieu. This is a very grimy, grubby, street-level sort of espionage, residing in warehouses and cramped offices and pubs and fuelled by pork pies and pints of bitter. Callan is chippy, working class and unremarkable-looking, more in line with Len Deighton's nameless secret agent (or Harry Palmer, if you're cinematically minded) than Ian Fleming's far-from-anonymous James Bond, while the section is a pretty rum outfit, not averse to resorting to kidnapping and torture (one poor sod, having run afoul of Callan, is effectively stripped of most of his memories – as well as his ability to speak English – by sadistic section doctor Garstang; we never learn his ultimate fate) alongside its main purpose of, as Hunter says, "Getting rid of people," whether that be "Bribery, blackmail, frame-ups" or, as Callan adds bluntly, "death". That last eventuality being, despite Callan's conscience, his particular area of expertise, as he lethally demonstrates on more than one occasion. 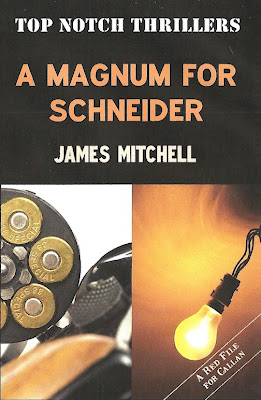 The Herbert Jenkins edition of A Magnum for Schneider is quite hard to come by these days, and the novel itself had, until very recently, been out of print for decades. Happily this splendidly dour spy thriller is now readily available again – both as a paperback and an eBook – courtesy of Mike Ripley's excellent Top Notch Thrillers imprint – as is its 1973 sequel, Russian Roulette. Because you see Mitchell published a series of Callan novels – a series that stretched into the early 2000s. And what's more, it wasn't his first spy series either, as I'll be exploring in subsequent posts. 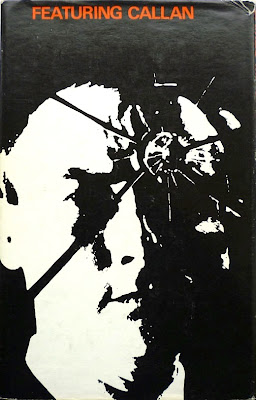