Apropos of nothing other than I took a load of pictures of my Patricia Highsmith shelf for yesterday's post on Deep Water and only used one of them, plus it subsequently occurred to me that an update to this shelf porn post from over three years ago might be of mild interest – and furthermore Patti Nase Abbott's Friday's Forgotten Books Patricia Highsmith special is, as the "Friday" in the title suggests, actually today, not yesterday (evidently I simply couldn't wait another day for the world to read my erudite and pithy ruminations on Deep Water) – presenting the Existential Ennui Patricia Highsmith first (and other) editions book collection, 2013 iteration: 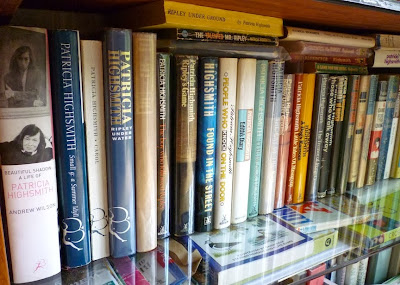 You can see that it's expanded somewhat from the collection as it stood back in 2010: 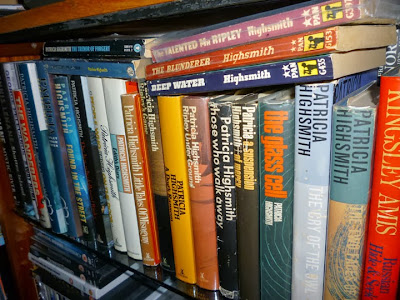 Although, remarkably, it's still in the same glass-doored cabinet it was back then, whereas all my other books have migrated to various far-flung (i.e., upstairs) bookcases and, in some cases, sadly (but necessarily; hello, little Edie), boxes in the loft. 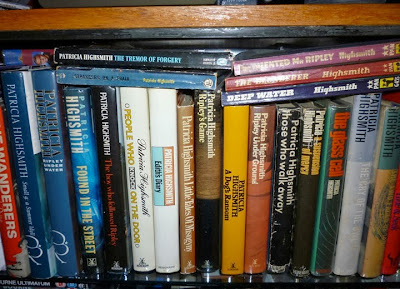 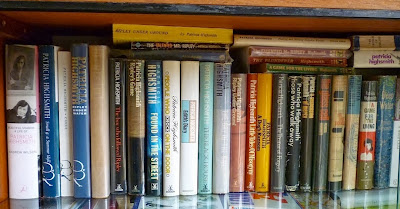 And resting atop the hardbacks, new additions are: an uncorrected proof of Ripley Under Ground (Heinemann, 1971); a first American paperback edition of The Talented Mr. Ripley (Dell, 1959); a first (revised) edition of Plotting and Writing Suspense Fiction (Poplar Press, 1983); and just visible far right, an uncorrected Heinemann proof – which, it suddenly strikes me, I've yet to blog about – of the aforementioned The Tremor of Forgery (Heinemann, 1969) and a curious hardback edition of The Talented Mr. Ripley (Heinemann, 1973). (Not seen in that more recent photo, by the way, is my 1961 Pan paperback edition of Deep Water, as I was using it to write my review.)

Hmm. Something else just occurred to me: the acquisition of that Heinemann first of Deep Water means I could, if I so desired, put together a proper Patricia Highsmith Heinemann first edition cover gallery...
Posted by Nick Jones (Louis XIV, the Sun King) at 08:45