Ross Macdonald's Lew Archer in The Zebra-Striped Hearse (Collins, 1963; a Clare, Suffolk Score), plus The Moving Target and The Drowning Pool

Let's take a look at the final book I bought on – or, more accurately, at the tail end of, and even more precisely, during the journey back from – my (and Rachel and little Edie's) summer holiday to Suffolk: 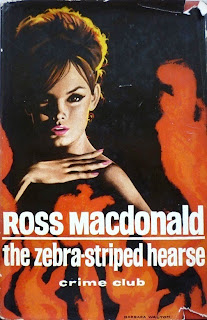 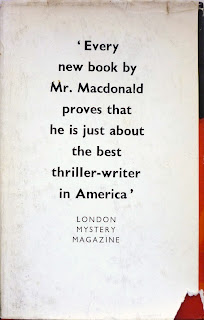 A British first edition of The Zebra-Striped Hearse by Ross Macdonald, published in hardback by Collins in 1963 (the year after the US Knopf first), with a dust jacket designed by Barbara Walton – now added to the Existential Ennui Beautiful British Book Jacket Design of the 1950s and 1960s gallery. I found this copy in the impressive books department of Clare Antiques & Interiors in the Suffolk village of, er, Clare, and bought it for four quid – an excellent price given that there are only half a dozen or so copies of the Collins first for sale online at present, a few of them ex-library or lacking their jackets and a couple of them priced around the fifty quid mark (with shipping). 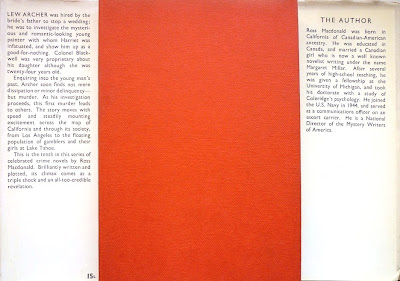 The Zebra-Striped Hearse is the tenth novel in Macdonald's eighteen-book series starring PI Lew Archer, a well-regarded entry – see this Tipping My Fedora review and this Mystery*File one – in what is a highly regarded series. I myself have blogged about Macdonald and Archer before, specifically this: 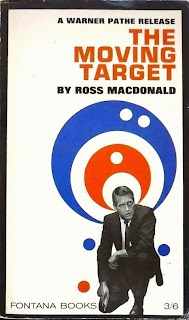 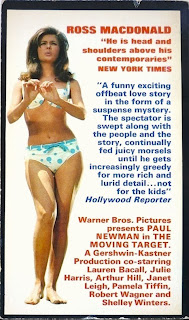 The 1966 Fontana paperback movie tie-in edition (i.e. to the Jack Smight-directed, William Goldman-scripted, Paul Newman-starring Harper) of the first Lew Archer outing, The Moving Target, which was originally published in 1949 under the author name of John Macdonald – both Macdonalds being aliases of Kenneth Millar. Indeed, the ensuing few Lew Archer novels were credited to John Ross Macdonald in the early years of the series (it wasn't until the sixth book, The Barbarous Coast, 1956, that Millar became simply Ross Macdonald), as evidenced by this: 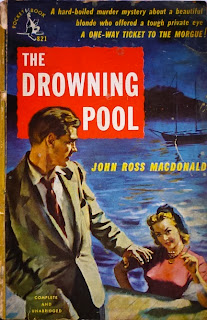 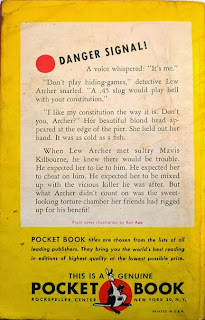 A 1951 US Pocket Books first paperback printing of the second Lew Archer novel, The Drowning Pool (originally published in hardback by Knopf in 1950), the opening page of which, incidentally, boasts more memorable lines than most novels can muster in their entirety. ("Everybody hates detectives and dentists. We hate them back." "Her face was clear and brown. I wondered if she was clear and brown all over."). I won this copy on eBay just the other day, for a few quid; the cover art is by Ray App, about whom I can find very little online (he's a bugger to google); the only other cover credits of his I've come across are for the 1951 Pocket edition of David Goodis' Of Missing Persons; the 1952 Uni-Book edition of Semple Gordon's Resort Hostess; and the 1963 Perma printing of Richard Dougherty's Duggan. 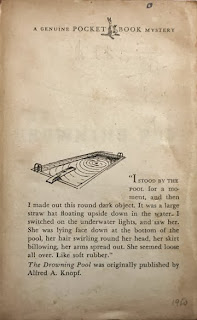 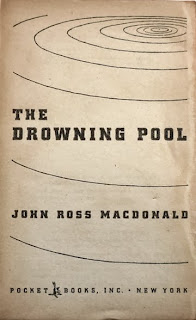 Speaking of cover artists, the acquisition of the Collins edition of The Zebra-Striped Hearse reminds me that I have some other books sporting Barbara Walton dust jackets I've not yet blogged about or added to Beautiful British Book Jacket Design of the 1950s and 1960s, plus one by her sister Eileen as well. So those will be up next.
Posted by Nick Jones (Louis XIV, the Sun King) at 07:00