I suppose it says something about the prolix nature of this blog that this series of posts on the recent Jones-Day family holiday to Suffolk – chiefly the secondhand bookshops visited and the books bought in them – has lasted longer than the holiday itself now. Still, mustn't let unnecessary navel-gazing distract us from the task in hand, namely: 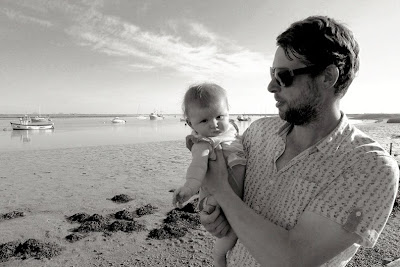 Yet more photographs of me and little Edie in picturesque Suffolk locales (photo courtesy, like most of the ones littering these posts, of the lovely and talented Rachel). That there is the view out to Orford Ness, a fascinating shingle spit near the River Alde estuary, close to the small town of Orford. I'll get to why it's so fascinating in a moment, but before we made it that far, Edie, Rachel and I spent some time in nearby Woodbridge, a decent-sized town I dragged the girls to in the mistaken belief that there were two secondhand bookshops there. In fact there was only one: a highly disappointing branch of Oxfam Books; the other secondhand bookshop, the one I really wanted to visit, turned out to be in the smaller and indeed more attractive town of Framlingham, about eight miles north of Woodbridge: 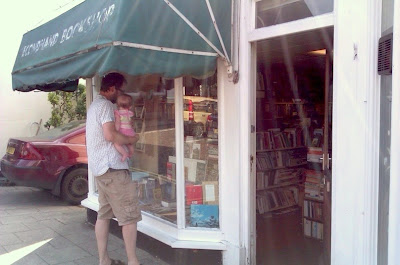 V. S. Bell, situated on the main square. Consisting of one smallish room, the shop is nevertheless crammed with books, notably a sizeable holding of crime fiction, in amongst which I spotted novels by Existential Ennui favourites Donald E. Westlake and P. M. Hubbard. Sadly I already owned the books in question, but I didn't own these ones:

First editions of Gavin Black's A Big Wind for Summer (Collins, 1975), William Haggard's The Scorpion's Tail (Cassell, 1975), Michael Gilbert's Death of a Favourite Girl (Hodder, 1980) and Andrew York's The Combination (Severn House, 1984). Haggard, Gilbert and York I've blogged about before (Gilbert only very recently), but Gavin Black is a new name to Existential Ennui. The pseudonym of Oswald Wynd, Black published fifteen thrillers from 1960 to 1991, thirteen of them, including A Big Wind for Summer, featuring businessman and adventurer Paul Harris. They were well-regarded in their day, so I'm looking forward to trying one.

But I didn't just buy those four books in V. S. Bell; I also came away with these: 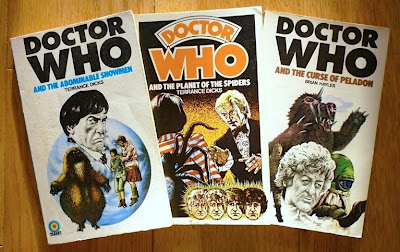 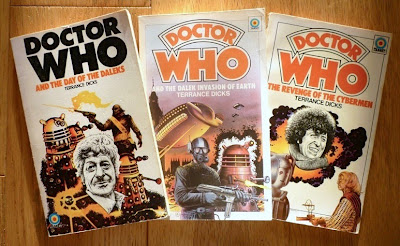 So, that was Framlingham. From there we headed to Orford, for once not because there was a secondhand bookshop there – as far as I knew there wasn't – but because it had been recommended to me as a lovely place to visit. Which it was, especially the quayside, where we got talking to an elderly local gentleman who told us about his wartime exploits in Africa and Italy and how he'd finally been posted to Auschwitz at the end of World War II, in total spending seven years in Europe. He also explained how Orford Ness had been used for all sorts of military shenanigans in the decades since WWII, including as an airstrip, a Cold War listening station, and for nuclear testing; you can still see the structures known as the "pagodas" from the quayside, and apparently there are miles of tunnels beneath what is now a nature reserve. 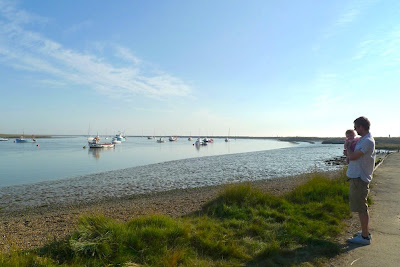 There's a great view back towards the town and Orford Castle: 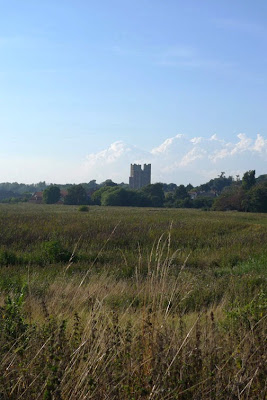 A view which Edie rather rudely decided to photobomb: 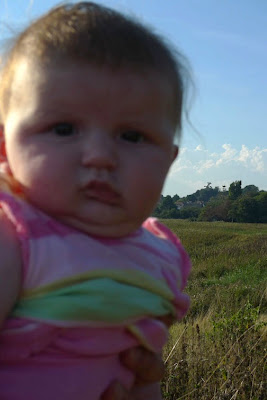 But there's also, not far from the big car park on the way to the quay, this: 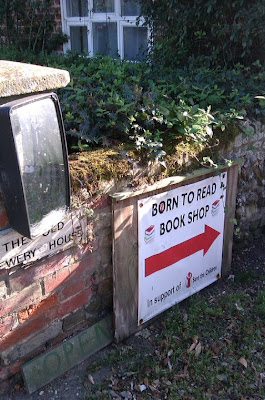 The Born to Read Bookshop. Yes, even when I don't go looking for a secondhand bookshop I still manage to find one, although it's only a shop in the loosest sense: if you follow the signs through the pleasant garden, within the confines of which chickens and their chicks roam about: 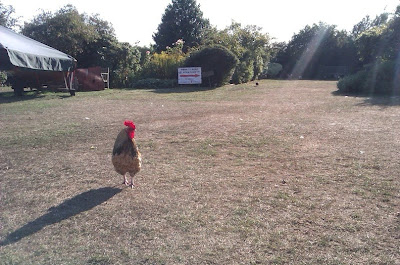 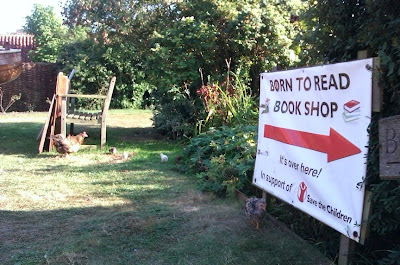 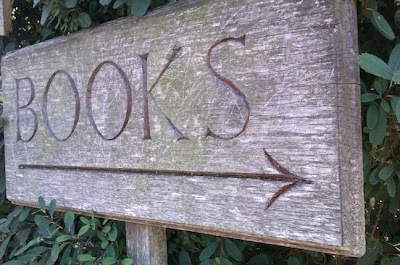 you eventually come to a conservatory, in which are crates of musty old books and a tin for whatever donation you feel suitable for whichever books you find: 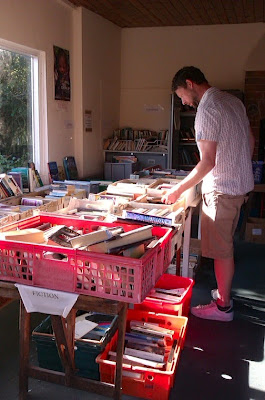 I came away with a couple of first editions: 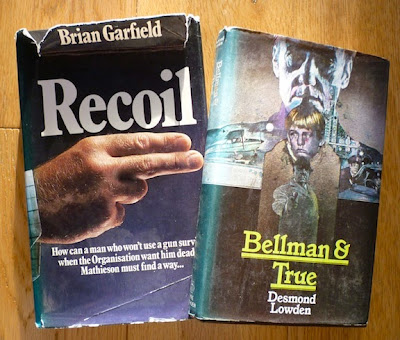 Brian Garfield's Recoil (Macmillan, 1977) and Desmond Lowden's Bellman & True (Eyre Methuen, 1975). Garfield I've covered previously, when I reviewed his best-known novel, Death Wish (1973), but Desmond Lowden is another new name to Existential Ennui; I picked up Bellman & True because I dimly recalled the 1980s TV adaptation, but the novel has a following too – there's a Friday's Forgotten Books review here. 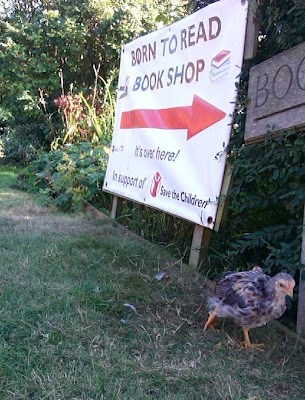 That, then, was Orford – and indeed that was our last full day of gadding about around Suffolk. But wait! There was still the journey back home to come, which, as luck would have it, coincided with the Long Melford Book Fair...
Posted by Nick Jones (Louis XIV, the Sun King) at 09:30