Having vowed never again to enslave myself to Existential Ennui by embarking on too many series of posts, I find myself, just three posts on from making that vow, in the midst of, you guessed it, another series of posts. But at least, to horribly paraphrase Eric Burdon, my intentions were good, in that the reason I've ended up reading, and then blogging about, two John le Carré novels in fairly quick succession (we'll skip over this interlude post – there's really no excuse for it) is because they both reside in the book I decided I most wanted to read (rather than most wanted to blog about), i.e. The le Carré Omnibus. Published in 1964 to capitalise on the success of le Carré's third book, The Spy Who Came in from the Cold (1963), it contains the author's first two novels – Call for the Dead (1961), and this: 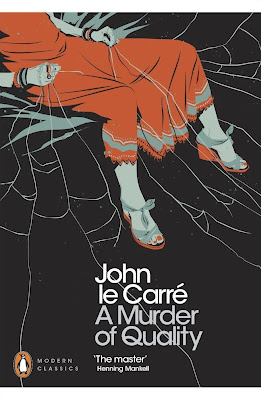 A Murder of Quality (1962) – which, although it stars Call for the Dead's lead, squat spy George Smiley, isn't, unlike most of le Carré's work, an espionage novel. Instead it's a murder mystery, set in and around the fictional rural public school of Carne, where Smiley, having retired from The Circus (MI6) in Call for the Dead (the first of many retirements from the service), is sent by an old intelligence colleague to find out who killed the wife of one of the schoolmasters. Once there, he quickly discovers what a poisonous place Carne is, populated for the most part by supercilious schoolboys and masters and their equally dreadful wives (the masters' wives, that is, not the boys'; they're a bit young for marriage) and fuelled by gossip and backbiting, a toxic social stew typified by a party Smiley attends where one harridan takes great delight in reminding him of the failure of his marriage. 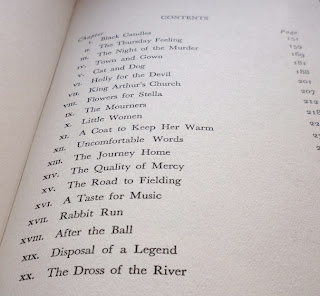 Indeed, Smiley's distaste for Carne – fear of the place, even – has its roots in his rocky relationship with the wayward Ann: his wife spent her childhood there. Still, George is a square peg in a round hole in most situations; early in the novel a commentator bestows upon him the memorable description "Looks like a frog, dresses like a bookie, and has a brain I'd give my eyes for" – and Smiley certainly puts that brain to good use getting to the bottom of this whodunnit-cum-tragedy. Although in the final analysis, it could be argued that it's the archaic, enervating institution of Carne itself that stands revealed as the true villain of the piece. 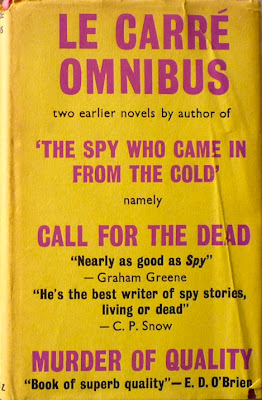 To a degree, A Murder of Quality reminded me of The Honourable Schoolboy (1977), and not merely because its school setting is echoed in the later novel's title. Like Schoolboy – like Smiley himself, in fact – A Murder of Quality is an odd fish, at least in comparison to the wider le Carré canon. Both books are slightly overlooked works sandwiched between spy fiction classics – A Murder of Quality bookended by Call for the Dead and The Spy Who Came in from the Cold; The Honourable Schoolboy by Tinker, Tailor, Soldier, Spy and Smiley's People – and yet nevertheless are rewarding novels in their own right, possessed of a genuine depth of feeling; in the case of A Murder of Quality, it seems evident le Carré was working through some quite personal issues to do with his time at Sherborne public school in the writing of the book. Furthermore, both, in their own ways, interrupt the longer narrative of their particular segments of the George Smiley series; because as Sergio from Tipping My Fedora points out in the comments on my Call for the Dead post, The Spy Who Came in from the Cold is essentially a sequel to le Carré's debut.

In light of which information, it stands to reason that since I'm already immersed in le Carré's world, I might as well stay undercover and plunge ever deeper into his murky milieu, with the aforementioned The Spy Who Came in from the Cold....
Posted by Nick Jones (Louis XIV, the Sun King) at 03:46