Existential Ennui in 2013: There Will Be Books 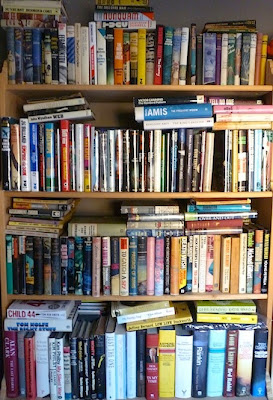 See that? That overfilled, double- and in some places triple-stacked bookcase? That, dear reader, is a visual representation of what's in store on Existential Ennui in 2013.

You see, this time last year, I posted a list of the authors that would be appearing on this 'ere blog in 2012. And many of those authors did in fact end up appearing – but not all of them: a good third either didn't feature on Existential Ennui at all in 2012, or only appeared in tangential fashion.

So, this year, rather than make promises I'll struggle to keep, I thought I'd proffer a more general preview, in the shape of a picture of my "pending" bookcase, on the groaning shelves of which reside the secondhand books I've bought but have yet to blog about. I might not blog about all of them in 2013 – in fact, I can pretty much guarantee that I won't – plus there are books on other, unseen bookcases (oh yes, there are other bookcases besides...) that I've also yet to blog about (a couple of nice Westlake Scores, for example) – not to mention a number of books on this bookcase that I have blogged about but haven't yet got round to removing to those other, unseen bookcases (it is, I'll readily admit, an imperfect system) – but I will almost certainly blog about some of the books on this bookcase this year.

Of course, annoying bastard that I am, I've made the picture too small to properly make out what half those books are. Even if you click on it to enlarge it.