If you've been paying attention at the back, you might have noticed that over the past five or six months I've been participating in Patti Nase Abbott's Friday's Forgotten Books initiative, whereby each Friday, Patti rounds up links to posts on obscure or overlooked books from like-minded books blogs – Pretty Sinister Books, say, or Bill Crider's Pop Culture Magazine, or Tipping My Fedora, or indeed Existential Ennui itself. To keep things interesting, every now and then Patti selects a particular author for FFB bloggers to write about, and this week she's picked Ray Bradbury.

When Patti originally suggested Bradbury back in October, I was initially thrilled: after all, he's one of my favourite writers, as evidenced by this post on The Martian Chronicles and this one on The Illustrated Man. But I quickly realised that, despite having read many, many of his short stories – not to mention novels like Fahrenheit 451 and Something Wicked This Way Comes – having already written about The Martian Chronicles and The Illustrated Man, I didn't have any other Bradbury books I could blog about.

Until I remembered these: 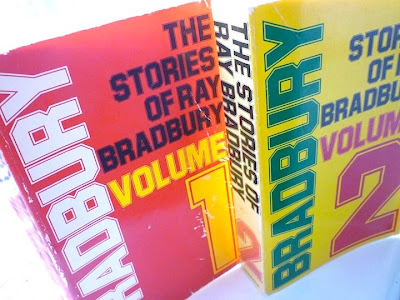 The Stories of Ray Bradbury, Volumes 1 and 2. Now, to you, I expect they don't look like much beyond what they seemingly are: ordinary, cheap, uniform cover collections of Bradbury's short stories, published in the UK in paperback – which ties them nicely into my ongoing series of posts on softcovers – by Granada in 1983 (and originally published in hardback in a single volume in the US by Knopf in 1980). I've owned them for years, ever since I originally bought them in, I think, WH Smiths in Beckenham, south London (the town in which I grew up), probably around the time they were published – which would make me thirteen years old (then, not now, obviously).

But here's the thing: they're the only books I've kept from my childhood. Admittedly I didn't own that many books back then; I read a lot, but most of what I read, besides comics, was borrowed from Beckenham Library – see this post on Doctor Who novelisations for more. I did own some books, although what most of them were I can't for the life of me think now, or recall what happened to them – they're all long gone. But these; these battered Ray Bradbury anthologies: they've stayed with me, through various moves, relocations, re-relocations, attendant clear-outs and stints in lofts – which is where I retrieved them from for this post. 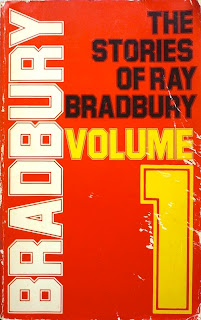 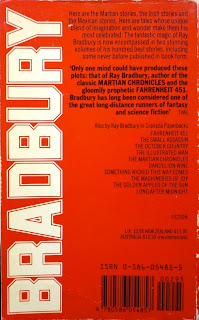 To be honest, I'm not sure I'd put too much stock in this; if I'd actually owned some Doctor Who novels or whatever the hell else I was reading back then, I'm sure I would have kept some of them, so the fact that these two volumes of The Stories of Ray Bradbury have remained in my possession is more a mixture of happenstance and serendipity than anything more significant. But part of the reason I've kept them is undoubtedly the stories themselves. All Bradbury life is here, from a selection of Martian Chronicles – including the horrifying gut-punch classics "Mars is Heaven" and "The Earth Men" – to nursery nightmare "The Veldt", time travel twister "A Sound of Thunder", touching fable "All Summer in a Day", and the elegiac "There Will Come Soft Rains", as well as stories whose titles have become perhaps more famous than the actual tales ("Dark They Were, and Golden Eyed"; "I Sing the Body Electric!"). 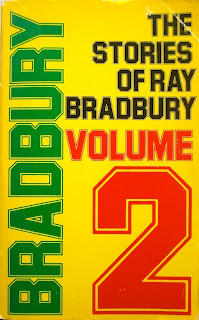 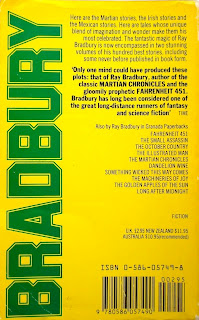 Across the two volumes there are 100 stories in total, with each book running to around 700 pages – which, with the awesome power of my maths skills, I have calculated comes to 1,400 pages in total. Two great big blocks of Ray Bradbury, marking the first time such a huge selection of his stories had been brought together in paperback, all of them chosen by Bradbury himself.

Not such ordinary books after all, then.

Next in these paperback posts: Patricia Highsmith.
Posted by Nick Jones (Louis XIV, the Sun King) at 03:06