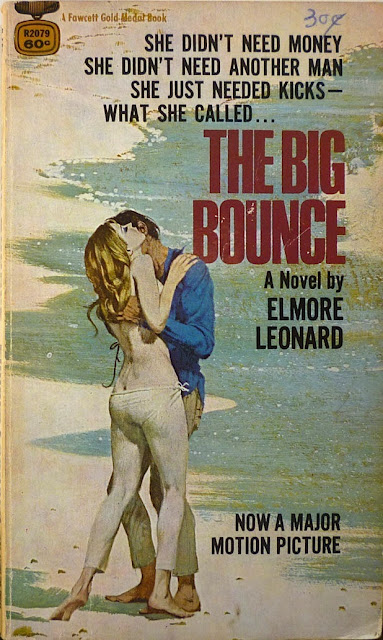 Elmore Leonard's The Big Bounce, published straight to paperback in the States by Fawcett/Gold Medal in 1969. This copy came from the basement of a Cecil Court secondhand bookshop, for less than a tenner – quite a nice find, considering the only copies I've seen online are in the US and listed for rather more than a tenner (and with postage on top), and the book's significance. Because The Big Bounce was Elmore Leonard's first crime novel – or, more accurately, his first contemporaneously set novel. Up to this point in his career, Leonard had published only westerns – novels and short stories – pretty successfully in the 1950s, with two of them, 3:10 to Yuma and The Tall T (alias The Captives) – more on that one later – being made into films in 1957. As soon as he decided to leave his ad agency job in 1960, however, the western market died on its arse; as Leonard explains in his introduction to the 1989 Armchair Detective Library edition of The Big Bounce, for most of the rest of the decade he "wrote ads, promotional material, industrial and educational films, everything but cocktail napkins and not a word of fiction". Eventually, the movie rights for his 1961 novel Hombre sold, and Leonard used the money to fund the writing of his "first novel with a contemporary setting, Mother, This is Jack Ryan".

Eighty-four (!) rejections, one rewrite and a title change later (although the line the original title was inspired by is still in the book), The Big Bounce found a home as a novel at Gold Medal and as a movie at Warner Bros. The film, directed by Alex March and starring Ryan O'Neil and Leigh Taylor-Young, is by all accounts a bit of a stinker – and the 2004 version isn't much better regarded – but the novel is terrific; not Leonard at his absolute best – that would come later with the likes of Stick, Get Shorty and Pronto – but not far off. Even at this early stage in his career, Leonard had a prose style all his own: lilting, deceptively easygoing, yet focused and intense; clever, lightly handled but thorough character work; and that gloriously naturalistic and yet still idiosyncratically Elmore-esque dialogue.

The plot isn't terribly complicated, but then Elmore Leonard plots rarely are; that aspect of writing just isn't that important to him. A young drifter, Jack Ryan (no relation to Tom Clancy's later CIA analyst-turned-president), takes a job working as a handyman at a Michigan lakeside cabana complex owned by local justice of the peace Walter Majestyk (no relation to Vincent Majestyk from Leonard's own Mr. Majestyk). Majestyk has seen film footage of Ryan using a baseball bat in a fight and so knows he has a self-destructive streak; but he also sees something worthwhile in the younger man, and does what he can to help him out – with a certain amount of resistance on Ryan's part. But then Ryan, who has a string of minor robberies in his past and has already turned over one local property, gets mixed up with Nancy, the manipulative mistress of Ray Ritchie, the rich farm owner for whom Ryan briefly worked as a picker – and Nancy has a plan for stealing fifty grand from Ritchie. 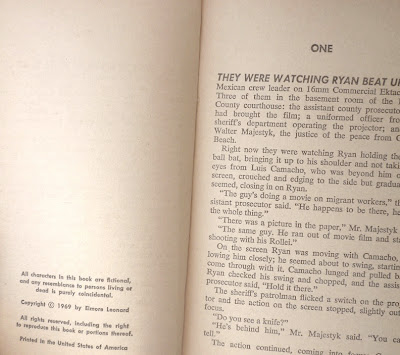 Everything flows from character in an Elmore Leonard novel: the decisions the protagonists take and the ramifications of those decisions; the things they say or do to one another and the consequences of those actions. It helps that Leonard has a forensic eye for character – not in an overwritten, overly intrusive sense – for really, how well can we truly know one another (something that Leonard-through-Ryan reflects on late in the novel: "What good was being cool if you weren't you? Whoever you are, Ryan thought") – but in the way he observes the little details: a certain look shot across a bar booth; the cocked head and corner-of-an-eye glance when combing one's hair in the mirror; the idle daydreams of a bored female holidaymaker, fantasizing about Ryan sweeping her off her feet.

Ryan is the archetypal Leonard male lead: quick-tempered, ready to stand up for himself (there's a memorably bruising but ultimately amusing encounter with Ray Ritchie's right hand man, Bob Jr.), sometimes kind of dumb, unselfconscious for the most part, but also self-aware and thoughtful. In fact, so archetypal is Ryan that Leonard admits in that 1989 introduction to The Big Bounce (reproduced here) that "All of my male leads... even in the westerns, resemble Jack Ryan in that they have much the same basic attitude about their own existence, what’s important and what isn’t", adding, "Jack Ryan might possibly have become a continuing character aging along with his maker, if it were not for the fact that each time you sell a film rights to a studio, they own the character for a specified number of years. So I change the names." Or rather, some of the names: like Raylan Givens and Ernest Stickley, Ryan would be granted the honour of another starring role, this time in 1977's Unknown Man No. 89. 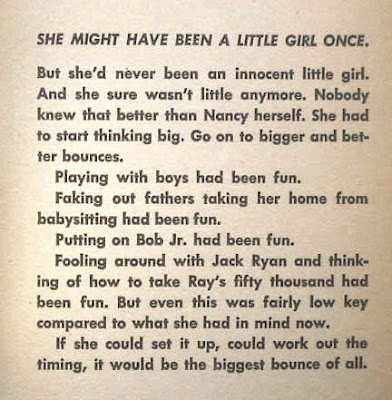 The one character in The Big Bounce I struggled with was Nancy. She's so bored, feckless, destructive and malicious it's a wonder any man falls for her, let alone Ryan, who has to constantly fight the urge to boot her in the behind and bugger off out of it. As it turns out, though, Nancy has her basis in a particular type of Los Angeles lass, characterised in a February 1967 issue of Esquire as "The New American Woman", and described by Hollywood literary agent H. N. Swanson as girls looking for "the bounce". The bounce in this case being the scheme to grab Ritchie's money – although latterly Nancy concocts an even bigger, rather more deadly bounce. 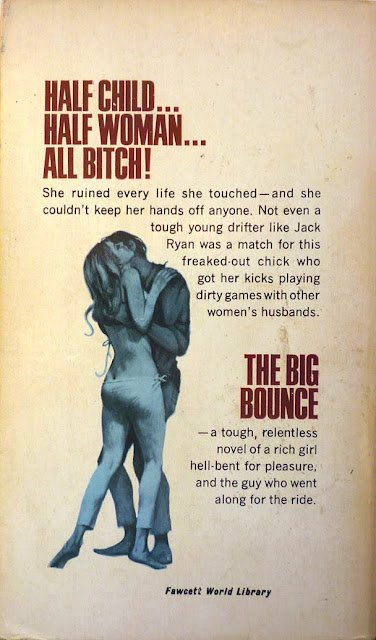 The Big Bounce marked the end of one phase of Elmore Leonard's career and the beginning of another, one which would come to define him as a writer. Appropriately, there's a sly parting farewell to the wild west form in the novel: during one of their misadventures, Ryan and Nancy spy on Walter Majestyk while Majestyk is watching television in his house. Ryan recognises the Randolph Scott horse opera the older man is engrossed in – "a good one", Ryan recalls, and then listens intently to "the part where Randolph goes in the cave after the guy named Billy Jack... jams the sawed-off shotgun under Billy Jack's chin and wham the guy's face disappears quick, the way it would happen, without one of those fakey fights." The western in question? The Tall T.

Next in this run of paperback posts: things take a turn for the science fictional...
Posted by Nick Jones (Louis XIV, the Sun King) at 02:46