For this final post on Edward S. Aarons and his Sam Durell-starring Assignment spy novels, let's head right back to the beginning of the series, with Durell's debut adventure: 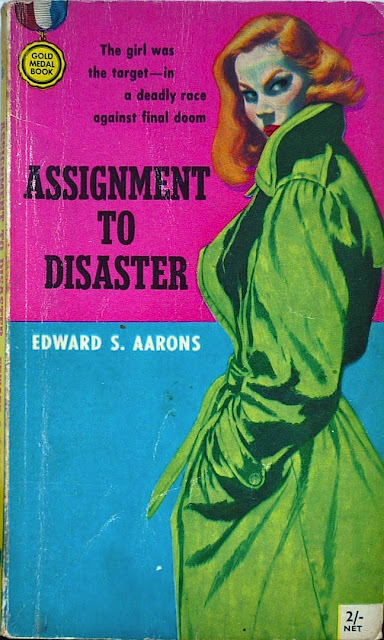 Published straight to paperback by Gold Medal in the States in 1955 and Frederick Muller in the UK shortly thereafter, Assignment to Disaster is, as others have remarked, atypical in comparison to the Assignment series as a whole, as it's set firmly within the USA (the vast majority of the forty-eight Assignment novels are set in exotic overseas locales). The story sees Sam Durell, agent of super secret CIA department K Section, tasked with locating missing scientist Calvin Padgett, who, before he disappeared, was working on a project to launch a nuclear missile into orbit. Durell's only lead is Padgett's sister, Deirdre (a name which, for me, never fails to bring to mind this Deirdre), but she's being hunted by the same nefarious agents who apparently kidnapped her brother. And so Sam is forced to go on the run with her, pitting him against not only his own colleagues in the CIA, but the FBI as well.

Essentially, Assignment to Disaster is one long pulse-pounding perspiration-drenched pursuit across the States, punctuated by bursts of violence – Sam is really put through the wringer – and a curious stopover at Sam's grandpa's beached bayou paddle steamer. As Doug Bassett notes, though markedly different to what would come after, the book sets up the basics of Sam's world, from his job description to his Cajun heritage and "improbable grandfather"; it's a decent little spy thriller, and a key work in that it helped ignite America's postwar passion for Cold War espionage fiction. 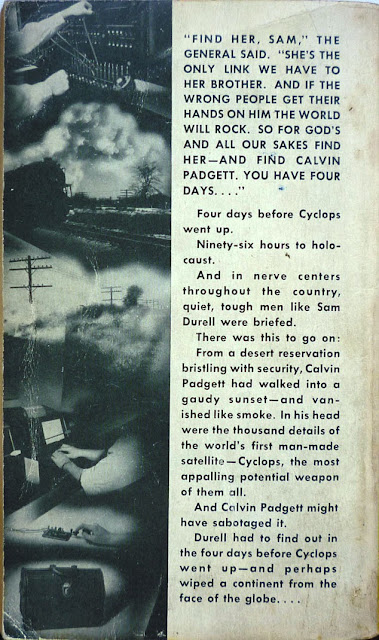 As is tediously frequently the case in my book collecting endeavours, through little-to-no fault of my own other than an inability to not buy books when I see them, I've ended up with multiple copies of Assignment to Disaster. Not only do I own the copy of the Muller edition seen above – the front cover art of which is uncredited; shout if you know who it's by – but two others besides; this: 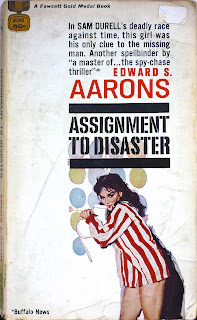 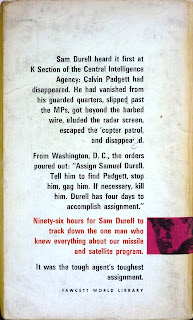 A 1959 second printing of the Gold Medal edition, featuring cover art by Charles Binger; and this: 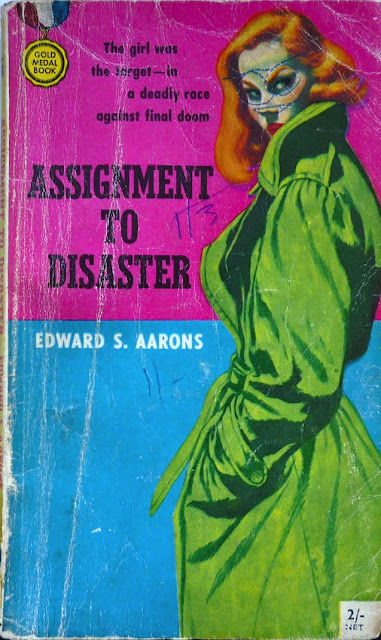 Yet another copy of the Muller first printing. I can't recall the correct order of events now, but I suspect I bought this copy first – probably at last year's London Paperback and Pulp Bookfair – before finding the other, rather tidier copy later. I elected to keep this one, though, for the express purpose of blogging about it. You can see on the cover that someone's decided that ravishing redhead Deirdre would look immeasurably sexier sporting spectacles, but that same someone evidently thought Assignment to Disaster would be the perfect book within which to practice their handwriting skills. They've made a tentative start on the half-title page: 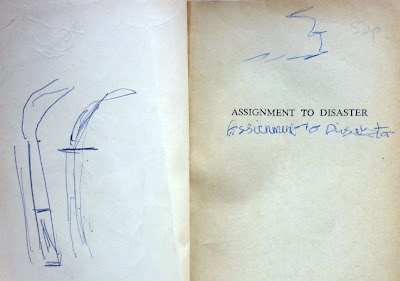 with a couple of attempts at drawing what I think are swords on the inside front cover, before properly knuckling down on the inside back cover: 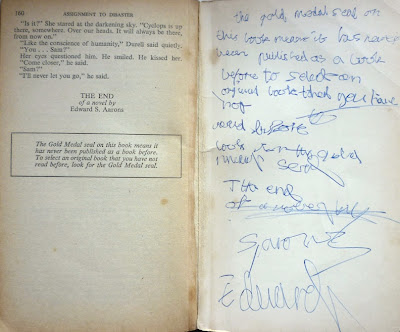 Weirdly, I'm sort of loath to part with this copy; I can't help wondering who it was who elected to use Gold Medal's sales blurb as a basis for learning to write. That's if that was the intention; I guess it could have been a trainee copywriter soaking in the deathless prose of a sales and marketing master.

Anyway, while I'm done with Edward S. Aarons for the moment, I'm not quite done with the paperbacks. Because I'll be staying with the humble softcover for at least the next few weeks to bring you books by, among others, Richard Stark, Patricia Highsmith, Elmore Leonard and John D. MacDonald – coming right up, after a Notes from the Small Press...
Posted by Nick Jones (Louis XIV, the Sun King) at 06:43