This next signed – and inscribed – edition is also a Lewes Book Bargain, as I bought it in the Lewes branch of Oxfam just the other week. Moreover, its dust jacket is, I reckon, splendid enough to join the Beautiful British Book Jacket Design of the 1950s and 1960s gallery – and it's on that jacket that the signature and inscription appears, rather than inside the book itself... 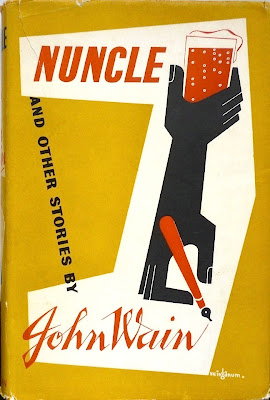 John Wain's Nuncle and Other Stories was first published in hardback in the UK by Macmillan in 1960, although this copy is, in fact, the second impression, issued in the same month (November) as the first printing. Wain, whose profile has, er, waned in recent years, was a poet and critic as well as a novelist, and a friend and contemporary of Kingsley Amis and Philip Larkin, with whom he was associated in The Movement. He was also linked, like Amis, to the Angry Young Men, although neither author really fitted that bill. Reading some of the stories in Nuncle, Amis was the writer who most readily sprang to (my) mind, even before I'd learned of their association; Wain shares in common with Amis a similar wit and a preoccupation – at least with the early Amis – with campus life, and a willingness to twist the knife: the opening story, "Master Richard", about a toddler burdened with adult consciousness, is a gleefully maleficent tale leavened by a late-dawning humanity that in turn leads to a bleak ending. That said, Amis is, I think, the better writer – but then as far as I'm concerned there are few writers as stylish and elegant as Kingsley Amis, so that's really not much of a criticism. 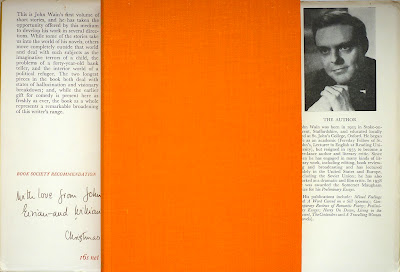 This copy of Nuncle has been inscribed by Wain on the front flap of the dust jacket; you can see part of that inscription above, but here it is in full: 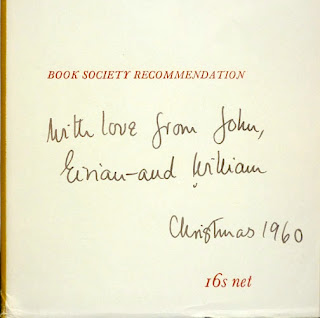 Evidently the book was sent as a Christmas gift (no idea to whom, though; possibly someone living in or around Lewes, given that that's where I found it); Wain hasn't signed his surname in the inscription, but I knew it was his hand because he's also inscribed it from "Eirian and William" – Eirian being Eirian James, his second wife – he was married three times – and William being, I believe, the eldest of his three sons, all of whom came from his second marriage. 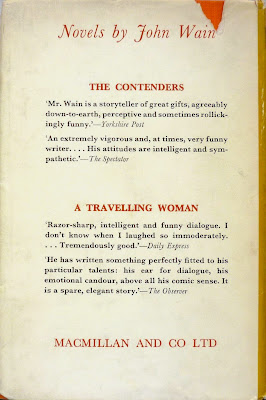 The dust jacket design on this Macmillan edition isn't credited, but it is signed: "Reinganum", alias Victor Reinganum, a British abstract painter, designer and illustrator who was linked to Surrealism and who helped guide the style of the Radio Times for forty years. His design for Nuncle is, I think, exemplary, and it's now joined the other covers on the Beautiful British Book Jacket Design page. Speaking of which, and seeing as Nuncle brings the total number of covers on the page up to 87, I thought I'd add a few more jackets to bring it up to a nice round 90, all of them by designers who already have examples on the page, and all wrapping books I bought from secondhand bookshop Dim and Distant in Heathfield, East Sussex. And I'll be unveiling those covers in the next post...
Posted by Nick Jones (Louis XIV, the Sun King) at 04:25