Towards the End of the Morning, by Michael Frayn (Collins First Edition, 1967): Book Review

Let's round off this run of posts on journalistic books with a review of a novel which is held in high regard by many journalists themselves... 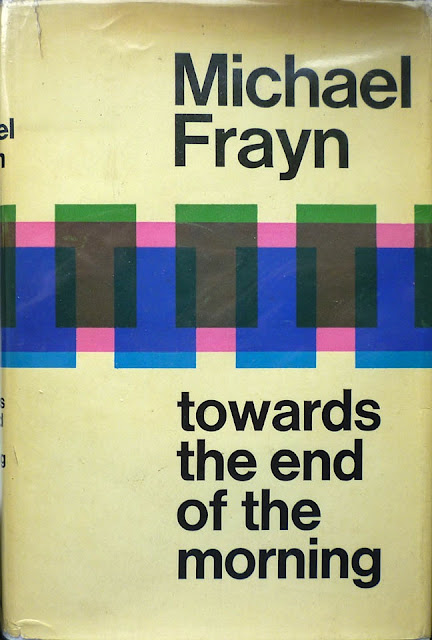 Michael Frayn's Towards the End of the Morning was first published in hardback in the UK by Collins in 1967, under a dustjacket designed by Charles Gorham. First editions/first impressions of the book in any kind of wrapper are quite hard to come by these days (possibly because most first editions are ensconced in the book collections of those aforementioned journos); there are currently only three copies of the Collins first on AbeBooks – one of those sans jacket, another a second impression, and the third with a wrapper that's missing a chunk of the back cover – although there is, at present, an ex-library copy available here. Mine was a lucky eBay win, and is a 1st/1st with a complete jacket (albeit with a few small tears). 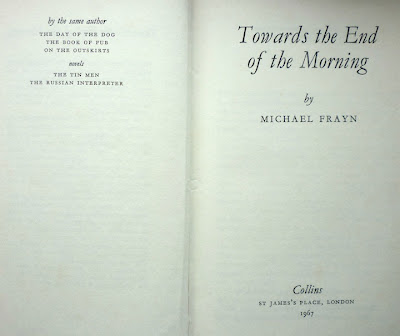 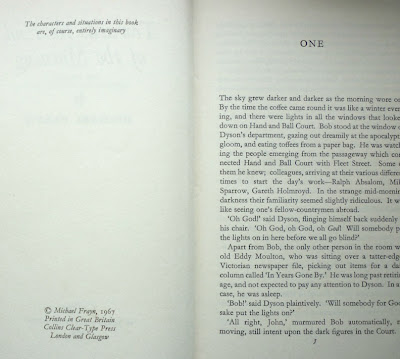 Towards the End of the Morning was Frayn's third novel, but although, as the late Christopher Hitchens noted, there are plenty of admirers of others of Frayn's works – not only his novels, such his debut, The Tin Men (1965), but also his many plays, among them Noises Off (1982) – for hacks, Towards the End of the Morning is the text that means the most. Largely set in an unnamed Fleet Street newspaper – reportedly a cross between The Guardian and The Observer (Frayn worked for both) – the novel follows a handful of employees of the paper as they go about their lives toiling in a backwater department of the daily, dreaming of a more exciting existence, and experiencing a series of comical setbacks. 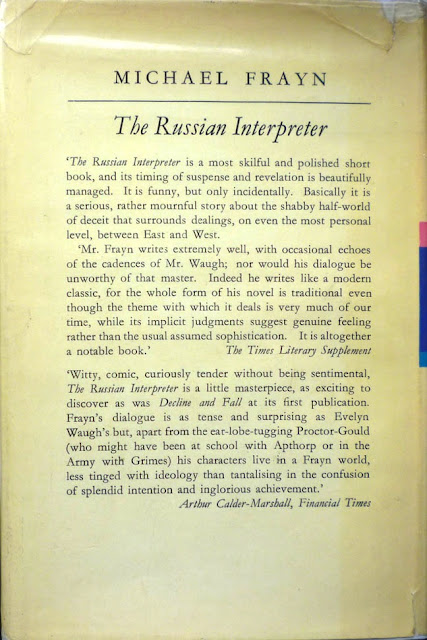 Inevitably, comparisons have been made to the preeminent novel about journalism, Evelyn Waugh's sublime Scoop (1938), but Scoop, with its stylish skewering of the sheep-like herd mentality of the press, actually has more in common with the last book I reviewed, Donald E. Westlake's Trust Me on This (well, up to a point, Lord Copper). Towards the End of the Morning, on the other hand, is an altogether quieter affair. There's no breaking news here, no frantic chasing of stories, merely the everyday, plodding grind of subbing readers' letters (or indeed completely rewriting them), chasing copy from recalcitrant clergymen and trying to keep the stock of crossword puzzles topped up.

There's no real plot to speak of, either. It's a very episodic novel, switching between chapters set in the office, where perpetually perplexed department head John Dyson bemoans his overwhelming workload (whilst not actually seeming to do very much work) while his placid, underachieving subordinate Bob Bell chews toffees, writes book reviews for the New Statesman and occasionally marks up copy (and old Eddy Moulton, keeper of the "Years Gone By" column, snoozes in the background), and those where Frayn delves into the humdrum home lives of the players, detailing Dyson's ongoing battle with a neighbour who persists in dumping his rubbish into Dyson's back garden and Bob's indifferent non-romance with his young girlfriend, Tess, with the occasional calamitous interlude. But what it lacks in plot, Towards the End of the Morning more than makes up for in rich characterisation, beautifully judged dialogue and witty and playful prose.

Almost every page brings a line or passage to relish, whether it be Dyson's frequent, despairing "Oh God!" exclamations at his lot in life, the cross-purpose conversations of the hacks down the pub at lunchtime, or Bob's elaborate evasion of the (possibly imagined) advances of his landlady (also the wife of the paper's irascible picture editor, Mounce, who, throughout the book, blithely ignores the fact that he's effectively been sacked – in a roundabout sort of way – by the distant editor). One excruciatingly farcical episode sees Dyson achieving a long-held ambition by participating in a late-night television discussion programme, only to spend the duration of the broadcast, buoyed by boozy bonhomie, gesticulating wildly, smoking like a chimney and telling his fellow panelists how interesting their points are. (His slow realisation later of how disastrous his performance was is utterly devastating, although, in the event, it turns out barely anyone saw the programme).

Quite apart from the humour, however, there's an elegiac quality to the novel. Even by 1967 there was change was in the wind for Fleet Street, personified in the book by Erskine Morris, a languorously ambitious young graduate latterly installed in Dyson's department. Using an electric typewriter rather than writing longhand, Morris makes short work of the "Years Gone By" column before going on to correct Bob's corrected copy and make in-roads into the features and leaders departments, all to the exasperation of Dyson and the admiration of Bob, who is dazzled by Morris's seemingly effortless momentum and trendy friends. At one point Morris tells Bob he sees himself owning a paper one day, and it's easy to imagine him achieving just that. 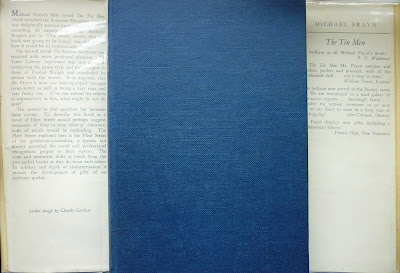 Clive James called Towards the End of the Morning "the best Fleet Street novel", but while it's almost certainly that, it's so much more besides. It's a comic study of ordinary folk stuck in dead end office jobs and dull, comfortable relationships, their dreams thwarted by their own lack of ambition or purpose – a book, then, about you, me, and most of the people we know. As Jannie, Dyson's wife, reflects late in the novel: "Life was all thumbs, she thought, a long series of wrong numbers."

Towards the End of the Morning is easily the best book I've read so far this year, with the potential, I suspect, to become one of my favourite ever novels (and as a result of having read it, I'll be returning to Michael Frayn on Existential Ennui before too long). So it's entirely fitting that its elegant Charles Gorham-designed dustjacket – evoking, perhaps, printer's registration colours (while colour would not arrive in British newspapers until the 1980s, colour supplements had been introduced by the Sunday Times and The Observer in, respectively, 1962 and 1964, so those hues on the cover could be taken as another signifier of change on Fleet Street) – will shortly be joining my Beautiful British Book Jacket Design of the 1950s and 1960s gallery – along with one or two other new additions...
Posted by Nick Jones (Louis XIV, the Sun King) at 04:04