Time for my third and final post on Butcher's Moon, the sixteenth Donald "Richard Stark" Westlake "Parker" thriller. And having eulogised the novel in an enervating fashion and examined the 1974 Random House first edition at laborious length, for this terminal missive I want to take a look at the first – and indeed only – British edition of the book. Fear not, weary reader: I promise this post will be mercifully shorter than its predecessors. 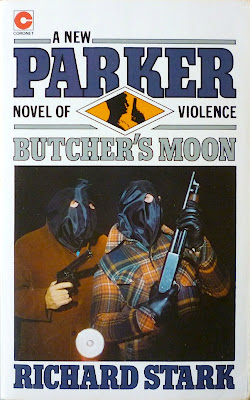 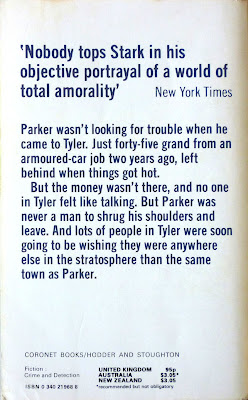 Published in paperback in the UK by Coronet/Hodder & Stoughton (formerly Hodder Fawcett) in 1977, the edition of Butcher's Moon seen above is, as I say, the only edition of the novel ever to make it into print in Britain. And not only that: it's the only printing, too; most of the other Parker novels Coronet published from 1967 onwards went through two or three printings (or impressions), often with different cover treatments, but Butcher's Moon warranted just this one 1977 outing. Ah, but surely, I hear you cry, you're overlooking the fact that the University of Chicago Press issued a new edition of Butcher's Moon this very year, you blithering idiot. And yes, it's true, they did. But not in the UK. Sure, the UCP edition is available over here via the likes of Amazon, but it wasn't actually published here. (Nor indeed were any of the other UCP editions of the Parker novels.) 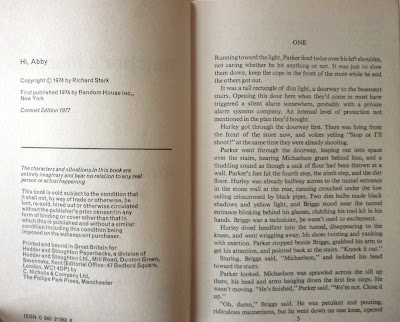 Consequently, the 1977 Coronet edition remains the only British appearance of Butcher's Moon, and is therefore decidedly uncommon; AbeBooks has just two copies listed at present, both from the kind of bulk-warehouse-style secondhand booksellers it's usually best to avoid. Mine came from a rather more human seller, and is in terrific condition, but unfortunately it doesn't reveal who was responsible for the cover design, which was sort of my reason for getting it. It might have been Raymond Hawkey, the legendary British designer who instigated the famed "bullet hole" covers of the Coronet editions of the Parkers in the early 1970s, like so: 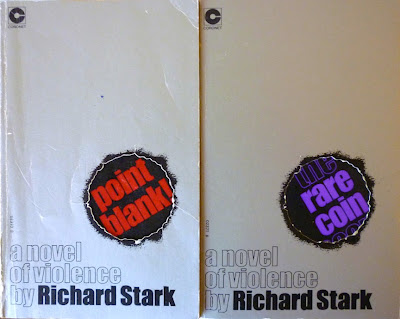 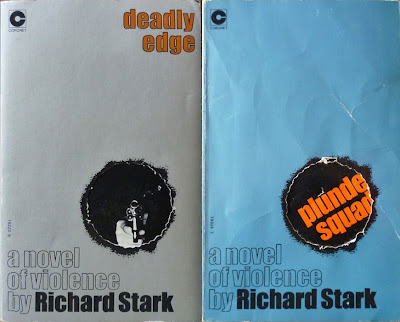 Hawkey was best known for the more photographic approach he deployed on British dustjackets in the 1960s and '70s, notably those wrapping the novels of his friend Len Deighton – see this Existential Ennui post for more on Hawkey and Deighton, and this one and this one for some similar examples to Butcher's Moon – so it could well have been he who created the Coronet cover. As ever, if anyone can shed any light on the true identity of the cover designer, do leave a comment.

And that, you'll be overjoyed to learn, is that for Butcher's Moon. Next from me on The Violent World of Parker blog, I'll probably be returning to Donald E. Westlake's science fiction short stories, with a couple of posts which will afford an insight as to why Westlake wrote SF... and perhaps more intriguingly, why he stopped... Here on Existential Ennui, however, it's back to the spy fiction series, with an extremely stiff-upper-lipped series of books by a writer who these days is virtually forgotten...
Posted by Nick Jones (Louis XIV, the Sun King) at 08:45