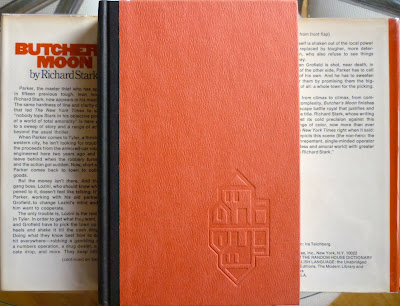 Having expounded at length – and how – on the meat (groan...) of Butcher's Moon – i.e. reviewing the novel itself – I thought I'd ruminate for a while on the American first edition of the book: its collectibility and current value, and how to identify a true first. Those whose interest in tedious matters to do with book collecting is negligible should look away now.

For many years, Butcher's Moon (Parker #16) was the holy grail of Parker novels. Like its predecessor, Plunder Squad (Parker #15, 1972), until this year (when it was reissued by University of Chicago Press) it had only ever been published three times in the English language: by Random House in the US in 1974; by Coronet/Hodder Fawcett in the UK in 1977; and by Avon in the US in 1985. All of the preceding Parker novels to these two had appeared in at least a couple more editions, usually from Berkley in the States and Allison & Busby in Britain. (Arguably, Plunder Squad was just as scarce as Butcher's Moon, but there seems to have been more of a mystique surrounding the latter, probably due to its end-of-an-era status and length.)

Consequently, Butcher's Moon was for a long time bloody difficult to get hold of, and for many Parker enthusiasts and collectors, their journey through the Parker novels came to an abrupt halt with the fourteenth book, Slayground (1971). (Comics writer and Parker fan Ed Brubaker mentions how hard it was to find copies of both Butcher's Moon and Plunder Squad towards the end of this Tom Spurgeon interview with Darwyn Cooke.) With the advent of the internet, eBay and aggregate bookseller sites like AbeBooks, Butcher's Moon became slightly more readily available, but copies of the book still remained out of reach for most folk unless they were prepared to part with a substantial sum, even for a tatty Avon paperback.

Of course, all that's changed now that the University of Chicago Press edition is out there. And the arrival of a new edition of the novel does appear to have affected prices of older editions – at least the Avon softcover: you can currently find copies of the Avon paperback on AbeBooks for around $20, although there are still some on the site for upwards of $75. The Random House first edition, however, has pretty much held its value: there are a few copies on AbeBooks for under $100, but those will probably be ex-library; you'd still be looking at at least $200 for a very good-to-near fine copy of the first.

I'd already managed to find a lovely example of the Random first of Butcher's Moon – you can see it at the top of this post and in the previous post – but for reasons that still aren't entirely clear to even me (but possibly because it was cheap), I picked up another copy of that edition fairly recently. It's an ex-library copy hailing from the Seattle Public Library: 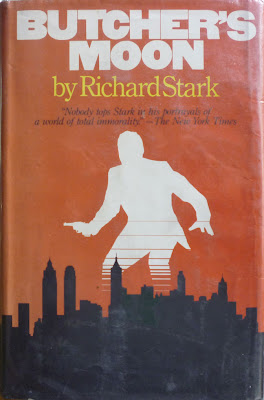 Generally speaking, ex-library copies are a bit of a no-no in book collecting circles – especially when they've had the front flyleaf (or endpaper) torn out – but for me they hold a strange fascination. I've written about this on Existential Ennui once or twice; there's a provenance to ex-library books that you just don't get with most secondhand books. With an ex-library book, you know exactly where it's been all these years (in a public library, basically). Being a Brit, American ex-library books are of particular interest to me (something to do with my view of the States as an exotic, far-off place, I think), and this one, aside from being in very good condition considering its history (evidently there weren't many Richard Stark fans in Seattle), hasn't been butchered (groan, again) for a change – it still has the library docket attached to the flyleaf: 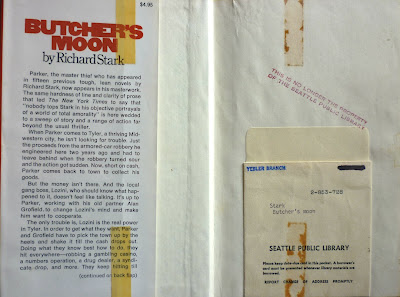 There's a certain amount of confusion surrounding how to identify a true first – i.e. a first printing (or impression) – of the Random House edition of Butcher's Moon. Identifying true firsts can be a minefield at the best of times, but with Butcher's Moon, matters aren't helped by the way Random House denoted first editions around this period. In many books you'll find what's known as a strike-off line, or number line, on the copyright page. If that line has a "1" in it, that usually means it's a first printing. But in the 1970s, Random House instituted an atypical form of strike-off line, one where, instead of ending on "1", first printings ended on "2" instead. To make things worse, a post-1970 Random House book with a strike-off line that ends in "2" still isn't necessarily a true first; true Random House firsts will also have the words "First Edition" next to the number line, whereas second printings won't, although they will still end with "2". So if you're ever thinking of buying a first of Butcher's Moon, make sure it has the words "First Edition" on the copyright page, like so: 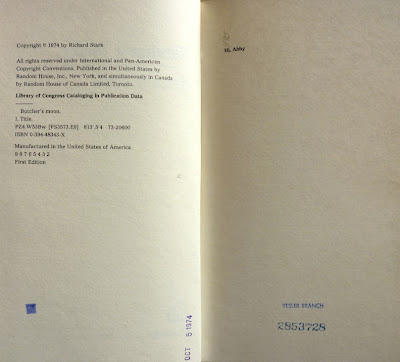 Mind you, I'm not entirely convinced Butcher's Moon ever went into a second printing, so this may all be academic. Oh, and, should you be interested, the dustjacket of the Random edition was designed by Ira Teichberg, other examples of whose work can be found in the AIGA Design Archives.

Anyway, all of that leaves me with just one further Butcher's Moon post (thank the Lord), which will be on the first – and, to date, only – British edition of the novel... 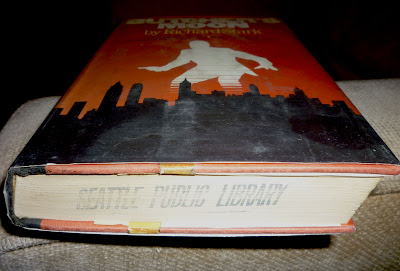