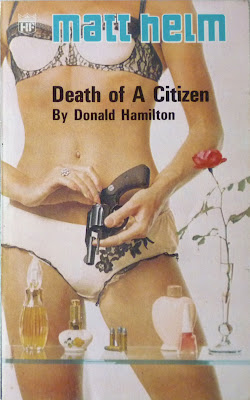 So then, as teased at the end of the previous post (on Adam Hall/Quiller) – and indeed also hinted at last month – I have some very exciting news today. Beginning in 2013, Titan Books will be bringing back into print American author Donald Hamilton's series of espionage novels starring super spy Matt Helm! 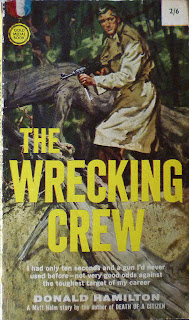 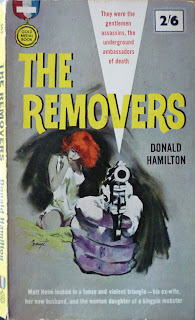 For those unfamiliar with the Matt Helm novels, from 1960 to 1993 Donald Hamilton penned twenty-seven adventures – plus one further, unpublished work – starring Helm, a former World War II secret agent who's brought out of retirement in his debut outing, Death of a Citizen. Hailed by spy novelist Jeremy Duns (among many others) as one of the best espionage series ever published, the novels are renowned for their gritty, grounded take on the spy genre. The books were phenomenally successful in their day, shifting twenty million copies worldwide and begetting four movies (starring Dean Martin) and a TV show, but sadly slipped out of print for years. Not for much longer, however: because in 2013, my former employers, Titan Books, will begin reissuing the series, starting with the very first novel!

Commenting on the news, Titan Books' Publisher, Nick Landau, said: "These novels were among the best spy thrillers ever published. We're thrilled to partner with the estate of Donald Hamilton, enabling us to bring them back into print and show readers what they've been missing all these years."

Terrific stuff, and no mistake. Doubtless there'll be further details from Titan – home too, lest we forget, to the Hard Case Crime imprint – on their plans for the Matt Helm series down the line, so keep 'em peeled for updates – and in the meantime perhaps go have a read of my three previous Hamilton/Helm posts, which can be found here, here, and here. And I'll be back before too long with that promised Violent World of Parker cross-post...
Posted by Nick Jones (Louis XIV, the Sun King) at 06:20