After the dizzying heights of my interview with Dexter creator Jeff Lindsay and my latest – and longest, I believe – Parker Progress Report (also available on The Violent World of Parker, of course), it's back down to earth with a bump, as I return, finally, to those promised signed editions. And just for change on Existential Ennui, these next couple of signed books I'm showcasing – following last week's Anthony Price signed firsts – are relatively new, both having been published this year. Let's take a gander at this one first: 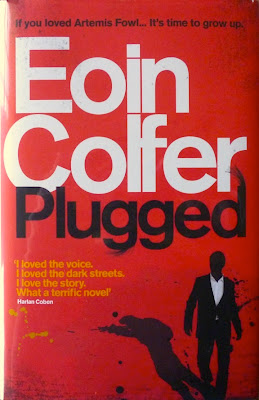 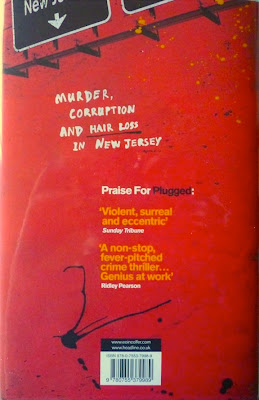 Eoin Colfer's Plugged was published in hardback in the UK by Headline in May of this year, with a dustjacket designed by James Edgar – who may well be this James Edgar, who runs the Letterpress workshop at London's Camberwell art college (around where I spent many a drunken evening in the 1990s, as I had friends who went there). Colfer is best-known for his Artemis Fowl children's novels, and Plugged was trumpeted as his first foray into more mature fiction, although that does slightly ignore his 2009 continuation of Douglas Adams's Hitch Hikers Guide to the Galaxy novels, And Another Thing..., which I read and enjoyed at the time. I've yet to read Plugged, but my old mate Keith Walters reviewed it on his Books and Writers blog, so go read that to find out more about it. (Keith also recently reviewed Vampire Art Now, a book I oversaw as part of my day job at The Ilex Press.) 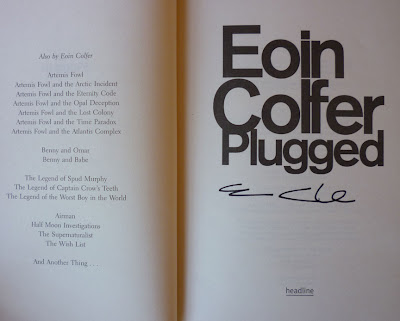 Signed editions of Plugged aren't terribly scarce or pricey at present – you can pick one up on Amazon for £12.99 – but I found a slightly cheaper copy, and since I wanted to read the book anyway, it's always nice to have a signed first edition/first printing. 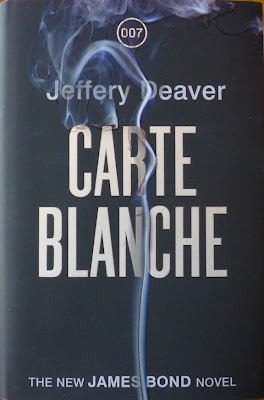 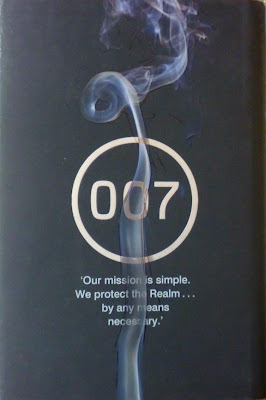 Jeffery Deaver's Carte Blanche was also published in hardback in the UK in May, this time by Hodder & Stoughton. As I'm sure everyone's well aware, Carte Blanche is the latest officially-sanctioned-by-the-Fleming-estate James Bond novel, following Sebastian Faulks's 2008 outing Devil May Care. I'm an admirer of Ian Fleming's original Bond novels, but I've not got very far into Deaver's contemporary take on 007 yet, chiefly because I keep getting distracted by other books. The reviews have been generally positive, although Steven Poole's one in The Guardian was rather less so, calling the novel "one giant steaming curd". (There's another, more appreciate review of the novel on The Guardian website by Stephanie Merritt, which I could've sworn I saw at the time in The Guardian newsprint edition and was struck by the decision to publish a hasty follow-up to Poole's caustic verdict. But according to the site, Merritt's review seems to have been in The Guardian's Sunday sister paper, The Observer, so evidently I misremembered.) 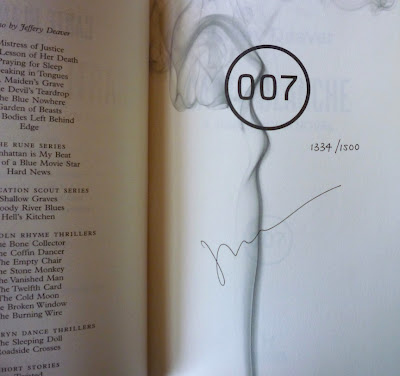 The edition of Carte Blanche seen here is the signed, numbered "indies only" – as in only available through independent booksellers – edition, limited to 1500 copies of the first printing of the hardback (still available for around twenty quid), which sports a reversed-out black dustjacket as opposed to the regular hardback's white jacket: 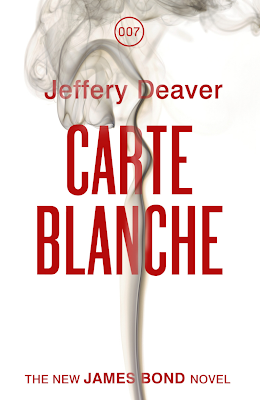 Both, however, feature the same cover photograph by David Gill. There's no overall design credit for the book, but it's nicely thought-through, with a fetching red finish and debossed "007" on the case: 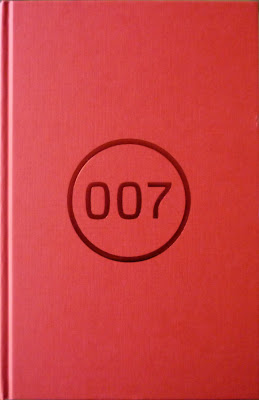 So then. What's next, boys and girls? Well it might just be another Westlake Score...
Posted by Nick Jones (Louis XIV, the Sun King) at 06:14