Well I hope we all enjoyed my pithy Q&A with the creator of the Dexter series of novels Jeff Lindsay on Monday; don't forget you can read more from Jeff this week on Blogomatic 3000, Another Cookie Crumbles and Shots. Back here on Existential Ennui, though, it's back to regular business, with a Parker Progress Report. 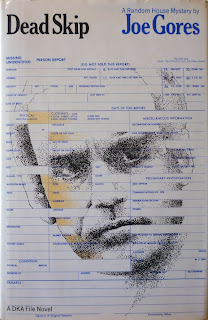 For the uninitiated, over the past year or so I've been making my way through Donald "Richard Stark" Westlake's Parker novels – and the spin-off Alan Grofield books – bunging up reviews as I go along. The last Parker Progress Report (as I term these Parker missives) I posted, back in January, was on the fifteenth Parker novel, Plunder Squad, and having reviewed the third Grofield novel, The Blackbird (a Grofield File, if you will), in November of last year, one might reasonably assume that my next review would either be of the sixteenth Parker novel, Butcher's Moon (1974), or the fourth and final Grofield outing, Lemons Never Lie (1971).

But there's a book that was published in the same year as Plunder Squad (1972), one which, although not actually written by Donald E. Westlake, one could still make a strong claim for it fitting into the Parkerverse. That book is the second novel by crime writer Joe Gores, Dead Skip, which begins Gores's six-novel series (plus assorted short stories) centring on the operatives of Daniel Kearny Associates, a firm of "skip tracers", or private investigators who specialise in car repossession. Dead Skip's story primarily focuses on three DKA investigators: Bart Heslip, who winds up in a coma following what appears to be a car accident; Larry Ballard, who suspects there's something fishy about Heslip's supposed accident; and the boss of DKA, Dan Kearny himself.

Quite apart from its Parker connections – which I'll return to shortly – Dead Skip is a fine novel in and of itself. Gores was a private investigator for twelve years, which lends the workings of the story an added plausibility, an authenticity, even. Much of the novel is taken up with Ballard's legwork, as he retraces Heslip's steps in order to try and work out which of his fellow P.I.'s open cases might be the one that led to Heslip laid up in hospital with a fifty-fifty chance of ever recovering. Trudging from door to door, driving back and forth across San Francisco, Ballard hits brick wall after blind alley, in the process encountering a colourful cast of hookers, barflies, errant wives and embezzlers, any one of whom could be behind what Ballard believes was actually an assault on Heslip.

It's only when the grizzled, shrewd, experienced Kearny himself hits the streets towards the end of the novel that the strands of the investigation begin to tie together – and it's here that Parker enters the fray. Following up one of Ballard's leads, Kearny finds himself in the Concord suburb of San Francisco, and at a nondescript single-storey house in that suburb. Parked outside this ordinary house, however, are five cars. Obviously Kearny knows a thing or two about cars, and quickly spots that three of them are rentals – from three different rental companies. His hackles raised, Kearny rings the doorbell, and is met by a "wide and blocky" man with "flat square shoulders, a good half a head taller than Kearny's five-nine. His hands were out of a foundry, his wrists roped with veins. His face was bony, as flat and hard as the shoulders, rough-hewn in the same foundry as the hands." 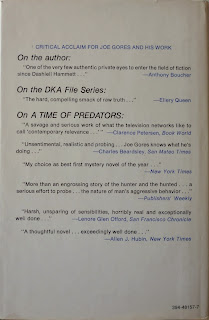 This, needless to say, is Parker. What Kearny has stumbled upon is a meeting to plan one of the – ultimately abortive – heists in Plunder Squad; the exact same scene plays out from Parker's perspective in that Stark novel (although slightly shorter: about four pages to Dead Skip's six). But what's interesting is the way Gores depicts Parker, and the back-story he builds into the encounter. At first Kearny doesn't recognise Parker, but as he's about to be turned away from the door, he suddenly recalls his name. Turns out the two have met before, "off stage", in the first Parker novel, The Hunter (1962), when Parker broke out of a prison farm and was on the lam. According to Kearny, Parker shacked up with a woman in Fresco, and that woman was Kearny's sister, with whom Kearny stayed one night, helping Parker to kill a bottle.

Now, for anyone familiar with the Parker novels, all this is of course new information, but Gores takes great care to ensure Kearny and Parker's relationship dovetails with the established Stark "facts". He also effectively conveys Parker's cold, taciturn, dangerous nature: Parker helps Kearny out in his investigation (mostly to get rid of Kearny, one suspects) by bringing to the door the wife of a member of the plunder squad, but when the address she furnishes for Kearny's suspect is identified by Kearny as being incorrect, we get this passage:

Parker didn't move, but the atmosphere changed. To Kearny it was as though the other man were leaning over her like an oncoming storm. You could almost see the shadow crossing her face. "Once more," Parker said, and there wasn't anything in his voice at all.

Clearly this is the same man we know from the Stark novels, the Parker we all know and fear. 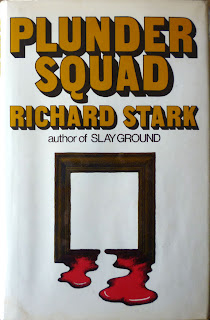 It's fascinating to read the entire encounter with Kearny in Plunder Squad. Last month Violent World of Parker supremo Trent posted a PDF download of a Donald E. Westlake interview from a 1988 issue of Armchair Detective, and the subject of Dead Skip and Plunder Squad crops up in that. For me, that interview shed new light on how the scene came about, as, according to Westlake, it was Gores who penned his side of the encounter first, and Westlake who had to make his novel fit around that. Which kind of helps to explain the curiously bent-out-of-shape nature of Plunder Squad, with its cul-de-sacs and plot non sequiturs – aspects which in fact make the novel more interesting than it might otherwise have been.

Bearing this in mind, it's possible to spot the odd sly dig at Gores in Westlake's take on the encounter. For one thing, Westlake opts to tackle the scene very early in Plunder Squad, perhaps evincing his mild frustration at having to derail his own story. But there's also a telling moment straight after Kearny reminds Parker of the drinking session the two had at Kearny's sister's place:

Parker remembered. Kearny had a private detective's ticket, but his field was bad credit risks, not wanted convicts. Parker had allowed him to kill most of that bottle that night, and had left early the next morning. 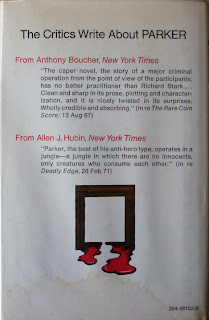 Westlake reveals in that Armchair Detective interview that he and Gores had planned a follow-up, this time with Westlake writing the scene for Gores to fit his story around. "It never happened the second time," said Westlake, "which is unfortunate, because, see, it's easy for the first guy. Joe could just write, ' . . . and Parker opened the door.' Then, in my book, I had to explain why. I had to get him there. Then I was going to do a thing where somebody from Dan Kearny Associates would pass through my book, and leave it to Joe to figure out. Joe stopped doing novels for several years."

The crossover between Dead Skip and Plunder Squad is typical of the games Westlake played both with his fellow writers and within his own books in the '60s and '70s. For my money, Westlake was at his most formally audacious during this period: tinkering with the structure of the Parker novels, spinning a bit-part player off into his own series of books (Alan Grofield), even leaking elements of the Parkers into his newly instigated Dortmunder series. I wonder occasionally what readers at the time made of these games, these shared chapters and crossovers – in a pre-internet era, how many were able to make the connections between a Stark Parker, a Stark Grofield, a Westlake Dortmunder, a Gores DKA?

I'll be returning to this period of formal deconstruction down the tracks, but before we draw a line under this (mildly and unintentionally epic) post, I just wanted to bring to your attention one other, earlier, largely unremarked nod to Westlake/Stark in Dead Skip, one which comes across as oddly meta in the context of what's to come...

Twenty pages before the Parker scene, Larry Ballard is talking to the female manager of an apartment block, who mentions in passing, "I've never met a real detective before... but I love Agatha Christie . . ." Ballard doesn't respond verbally, but in his omniscient narration Gores wryly notes that Ballard "only read Richard Stark". 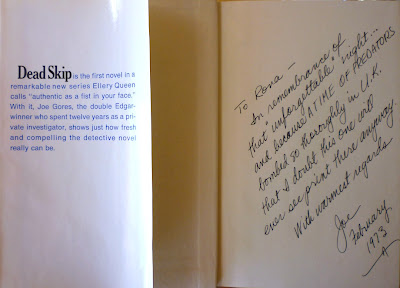