For this final post on Elleston Trevor/Adam Hall's series of espionage novels starring secret agent Quiller, I thought I'd share what I've thus far gleaned – in the admittedly brief period of time since I became interested in these books – about collecting Quiller, using this fine tome as an example: 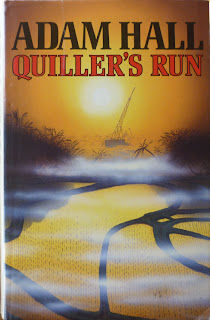 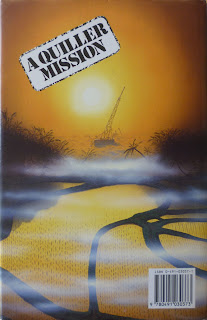 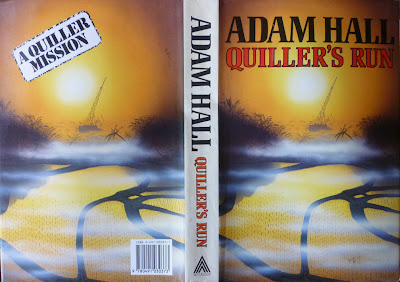 This is the UK hardback first edition of Quiller's Run, the twelfth Quiller thriller, published by W H Allen in 1988. The dustjacket illustration is uncredited, but I believe it's by Tony Masero, an artist who's well-known for his Doctor Who novelisation covers – certainly the jacket of the preceding book in the series, 1985's Northlight, is by him, and Quiller's Run seems to be of a piece with that style. I found this copy in the Oxfam Bookshop in Tunbridge Wells during my recent fortnight's holiday, for three quid – which, it turns out, was a bit of a bargain, because first editions of this one aren't in plentiful supply; at time of writing AbeBooks only has two Allen hardbacks listed, both ex-library. And in researching the book for this post, I discovered that it's not the only first edition from the back half of Hall's career that's hard to come by. 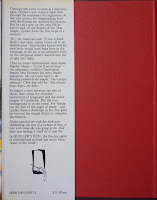 Commonly when you collect first editions you find that an author's earliest novels command the highest prices. This is usually the case even when those early works are in plentiful supply – early novels will always be of greater interest to completist collectors. But occasionally the reverse is true. There can be any number of reasons for this – an author might wane in popularity towards the end of his or her career, thus causing fewer first editions to be printed, or print runs of the hardbacks of their later novels may have been reduced anyway due to publishing conditions prevalent at the time – but the net result is the same whatever the explanation: first editions of their later books become really scarce, and bloody expensive. Such is the case with Quiller.

Probably the easiest way to explain the current Adam Hall collecting state of play is for me to first provide a complete Quiller British first edition bibliography, including, in each case, the publisher – the first time this has been done on the internet, I believe – so you can see who published what when. So here we go:

Firsts of the Collins and Heinemann editions of the novels – from The Berlin Memorandum to The Pekin Target – aren't difficult to get hold of; generally speaking a decent copy of all of those can be had for around a tenner each. Where things really start to become tricky is with the W H Allen and then Headline first editions of the books. Northlight, the first Allen hardback, is relatively easy to come by in first – AbeBooks currently has around twenty copies listed, a good number of those for less than a tenner – but thereafter matters become rather more murky. Quiller's Run I've already discussed, but the next book after that, Quiller KGB, is in rather short supply in first; at time of writing AbeBooks only has two copies of the Allen first edition for sale, one in the UK, the other, an ex-library copy, in Australia, both for about thirty quid. There was a third copy for less than that... but I bought it. Sorry. 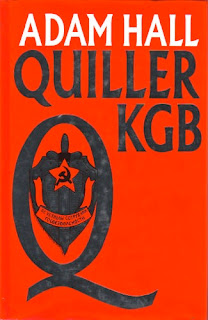 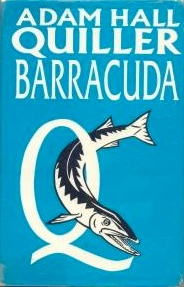 The next book in the series, 1991's Quiller Barracuda, is almost as scarce – AbeBooks currently has only four copies of the Allen first edition listed, although those are more agreeably priced at around the £15 mark – but is complicated by the fact that the book was first published a year before its UK debut in the States by William Morrow, and that in the UK, it was reissued in hardback the following year, 1992, by Headline, the publisher who would thereafter publish the Quiller novels in Britain. The subsequent Quiller novel, Quiller Bamboo, which Headline again issued in 1992 in hardback, was also preceded by a Morrow edition, although that doesn't seem to have impacted its scarcity: AbeBooks has only three UK first editions listed right now, one of those for more than fifty quid.

Quiller Solitaire, the sixteenth novel, is more readily available, with a good seven or eight copies of the first edition on AbeBooks and more available on Amazon Marketplace (you'll often find additional copies of particular editions for sale over there, too, although listings can be duplicated from AbeBooks), though in both cases some of those are ex-library. And ex-library copies seem to be what's mostly available of the Headline first of the next book, Quiller Meridian; currently I can only see a couple of copies that aren't ex-library online, and one of those is going for £45. 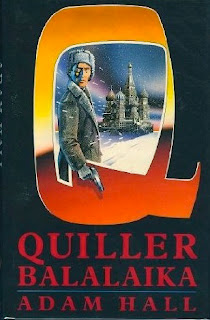 And then we get into the real rarities. Unless you're prepared to accept an ex-library copy, the 1994 Headline first edition – and first printing; I think it went into a second impression – of Quiller Salamander is very hard to come by – so hard, in fact, that I can't see any non-ex-library copies for sale online right now. On the other hand, a few non-ex-library copies of the Headline first/first of the final book in the series, 1996's Quiller Balalaika, are available, but you're looking at anything from £150–£350 for those. Of course, whether or not anyone would actually pay that amount for a copy is open to debate. It's a curiosity of online secondhand bookselling that books often aren't priced so much to sell as to seemingly sit on AbeBooks indefinitely. If certain book dealers halved their prices, they might actually shift some of their overpriced stock – I for one would be more inclined to purchase those later Quillers if they were more attractively priced.

Anyway, for me, in some respects, Quiller looks to be a tough nut to crack collecting-wise. But as previous collecting sprees have perhaps proved, I'm nothing if not determined in these matters.

And that's it for Quiller for a while, although I will obviously be returning to him at some point. Next, though, it's back to the random books blogging. I've got a few reviews to get through, including a graphic novel, and I'll be spotlighting a recently rediscovered thriller writer who I reckon will be unfamiliar to most folk. And looking further ahead, I'll soon be unveiling that exclusive interview with an author I teased... But first, in the next post, I'll be showcasing a book that goes on sale this very week; an illustrated biography of a towering name in the comics field; indeed a book that I actually edited, in my role as managing editor at The Ilex Press, and which I'll also be writing about over on the Ilex blog...
Posted by Nick Jones (Louis XIV, the Sun King) at 06:14