Next up in this series on Elleston "Adam Hall" Trevor's novels starring secret agent Quiller, another book I bought on my birthday day out way back in the mists of time (er, March): 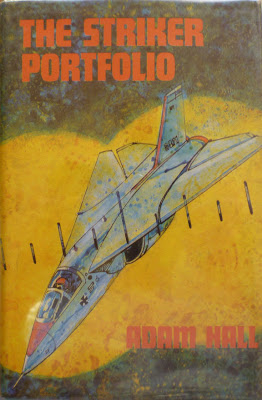 This is the 1970 hardback edition of the third Quiller mission, The Striker Portfolio, published by The Book Club, Charing Cross Road – originally published in hardback in the UK by Heinemann in 1969. I picked this up in one of my favourite bookshops, Much Ado Books in Alfriston, East Sussex, on the same day on which I also bought the 1965 first edition of the debut Quiller, The Berlin Memorandum. I'd actually seen this copy of The Striker Portfolio sitting on Much Ado's crime fiction shelves on previous visits to the shop, and even handled it a couple of times, not really knowing what it was. However, on this visit, having been made aware of Adam Hall by Jeremy Duns, I snapped it up for a few quid. 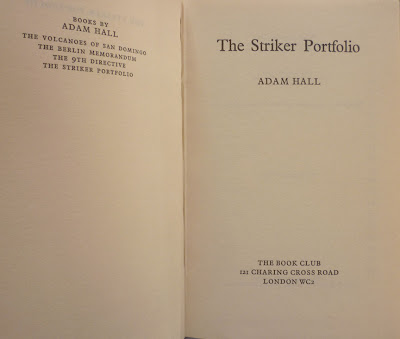 Regular readers of Existential Ennui will know that ordinarily I steer well clear of book club editions, but I rather like the dustjacket on this one, the colourful – but unfortunately uncredited – line-and-watercolour illustration on the front of which is different to the 1969 Heinemann first, which you can see on the right. On top of that, prices on the Heinemann and Book Club editions on AbeBooks are pretty similar – in the five-to-ten-pounds range – so it's not as if the first edition is noticeably more valuable or anything – and indeed the American Simon & Schuster edition preceded the Heinemann one by a year anyway. I haven't read the novel yet, so if you want to know what it's about, click on the jacket flap blurb above, or head over to the indispensable unofficial Quiller website, which has a pithy summary of the novel and a cover gallery.

That leaves just one more post to come in this run of Quillers. And for that finale, we turn to a novel from much later in Trevor/Hall's career, which I picked up during my recent fortnight's holiday, and which I'll be using to illustrate what a tricky proposition Adam Hall is for book collectors... 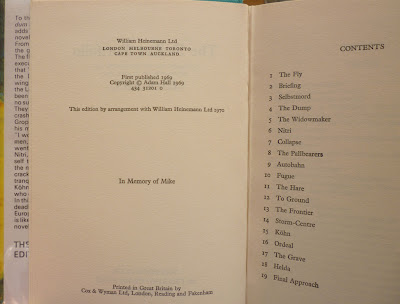