On to the second of three reviews of Anthony Price's superior spy novels, which feature various operatives of the Ministry of Defence's Research and Development intelligence department. And after yesterday's appreciation of Price's debut, 1970's The Labyrinth Makers, today it's the turn of his sophomore effort: 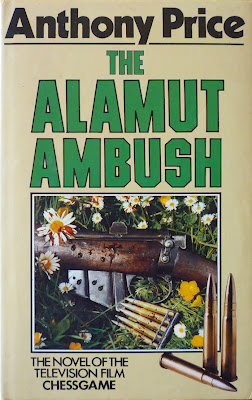 The Alamut Ambush was first published by Victor Gollancz in the UK in 1971; the cover you can see above – designed by Brian Nicholls – is the 1983 reissue, published to coincide with the ITV television series adaptation Chessgame, and an edition of the book about which I waxed perhaps a little too lyrically in this post on collecting Price's novels. This time events are related from the perspective of Squadron Leader Hugh Roskill, inheriting the pilot's seat, as it were, from The Labyrinth Makers' Dr. David Audley. In marked contrast to the aloof, distant Audley, Roskill is a much warmer, more human lead; tasked to enlist Audley's aid in investigating an attempt on Foreign Office man – and apparently something of a nemesis of Audley's – David Llwelyn, he soon realises that he's being manoeuvred by his superiors due to his close connections with Alan Jenkins, the young technician who was killed when he triggered a bomb in Llewelyn's car. 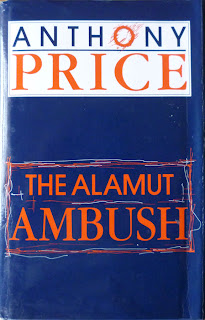 Young Jenkins's death hits Roskill hard; henceforth he's motivated by, if not a desire for revenge, then at least for some kind of justice for Jenkins – something that intelligence chief Sir Frederick and Joint Intelligence Committee supremo Stocker know only too well. And Sir Fred and Stocker are also well aware of Audley's animosity towards Llewellyn, which they've pinpointed as another motivating factor, in a reverse psychology sort of way. But what they aren't aware of, and what Roskill, Audley – and, latterly, Major Jack Butler, ostensibly there to keep an eye on the other two – quickly realise, is that Llewlyn almost certainly wasn't the intended target of the bomb: Jenkins was. Which begs the question, why would a lowly technician be targeted for a terrorist attack?

The answer might lie with Arab assistance institution the Ryle Foundation; a fabled assassin named Hassan; and something known as the Alamut List, and more geographically in England's South Downs. And here the novel takes on a special significance for me, because much of the action is either set in or references the area surrounding Lewes, the East Sussex town in which I live and work. Jenkins hailed from East Firle, a small village nestling near the foot of one of the tallest peaks in that stretch of the Downs, Firle Beacon; Roskill flew with Alan's older brother, Harry, and often stayed in Firle on leave. But it seems as if Alan saw something on the Beacon the last time he was in Firle – something to do with Israeli intelligence operative Jake Shapiro and Egyptian Colonel Razzak, both of whom, rather incongruously, were in the area at the same time – a confluence of people and place which may have got Alan killed. 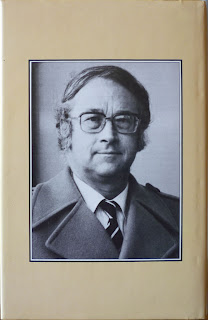 Price evidently knows the area well: there are mentions of Lewes, Alfriston, the Cuckmere river/valley, Pevensey and the Long Man of Wilmington, all locations I'm well acquainted with. At one point Roskill rides on horseback up a steep track to the top of Firle Beacon, and I'm positive I've followed exactly the same path, rambling alongside the fields at the foot of the Downs from Firle and then up the hill beside a wood. It's actually quite thrilling to read about places one knows so intimately, and for me lent The Alamut Ambush an added frisson of familiarity.

But there's more to the novel than a mere travelogue. There's a real heart to the book, affording it more warmth and consequently making it slightly more engaging than The Labyrinth Makers. And that heart resides in Hugh Roskill. Unlike the occasionally supercilious Audley (now married to Faith Steerforth from the first novel, which hasn't softened him noticeably) and the gruff, no-nonsense Butler, Roskill is emotional and conflicted. He's embroiled in a hopeless affair with married society woman Lady Isobel Ryle, an illicit liaison that his superiors are also well aware of, and which they exploit mercilessly by having Roskill probe the Ryle Foundation. Meanwhile his friendship with Alan Jenkins and feelings of guilt lead him inexorably towards a bloody climactic showdown in the New Forest.

I genuinely feared for Roskill's survival at the end of The Alamut Ambush: bleeding from a machine gun wound, alone and armed only with a rifle, and knowing numerous lives depend on him, Hugh must stay conscious long enough to confront the terrorists. It's a shattering climax to what is a typically Byzantine tale – and my favourite of the Anthony Price books I've read thus far.

Which isn't to say the next novel I'll be reviewing, 1972's Colonel Butler's Wolf, doesn't have its own particular merits. But what it does have is perhaps even more of a socio-historical significance than the Cold War/Middle East trappings of The Labyrinth Makers and The Alamut Ambush. So in my third and final review of Price's novels – for now, anyway – I want to approach the book from a perspective I've not yet attempted in these reviews and try and set the novel in context. Let's see how I get on, shall we?

(As with yesterday's review, in the interests of balance I thought I'd direct your attention to another, slightly cooler take on The Alamut Ambush, on the South London Books blog. Well worth a read.)

(NB: a two-part interview I conducted with Anthony Price can be found here and here.)
Posted by Nick Jones (Louis XIV, the Sun King) at 08:47