This week on Existential Ennui I'm blogging about British author Anthony Price and his fine series of nineteen espionage novels, which star British Intelligence operatives David Audley, Hugh Roskill, Jack Butler and their colleagues. On Sunday I posted an overview of the series and a bibliography, and later in the week I'll be reviewing each of the first three novels. Today, however, I want to concentrate on an aspect of Price's books that almost certainly won't have been touched upon elsewhere on the internet (partly because few people are as dangerously obsessive as I am), a subject that is, in many ways, the driving force behind this 'ere blog: the pleasures and pitfalls of collecting said books. And I'd just like to apologise in advance for the length of this missive; it's been a while since I've attempted one of these in-depth book collecting posts, so it kind of ran on a bit. I'll entirely understand if you decide to skip it and wait for those promised reviews. Honestly, I really wouldn't blame you. 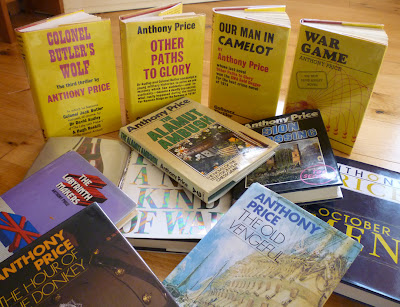 So then. Unlike many of the authors I blog about, Anthony Price isn't completely out of print. Three of his novels – The Labyrinth Makers (1970; Audley series #1), Other Paths to Glory (1974, #5) and The Old Vengeful (1982, #12) – are currently available as both paperbacks and eBooks from Orion, which means that those of you who can't bear to read anything other than a brand spanking new book – or indeed a brand spanking new electronic book – will find it easy enough to dive straight in. But as longtime readers of Existential Ennui will attest, brand spanking new books aren't, in general, or in essence, what this blog is all about. First editions are what set pluses racing round these here parts, or if not first editions then at least intriguing later editions. And on that score, Mr. Price has a lot to offer.

Here in the UK, all of Price's novels, from 1970's The Labyrinth Makers to 1989's The Memory Trap, were published by Victor Gollancz, and while first editions of the later books in the series are relatively easy to come by, the early novels are another matter entirely. The most valuable is his debut, the aforementioned The Labyrinth Makers; at present AbeBooks has only four copies of the first edition for sale, ranging from £150 to £350. But each of the books up to and including Soldier No More (1981) – and even beyond that – presents its own unique challenges, not merely in terms of such prosaic matters as availability and affordability, but also more aesthetic concerns to do with dustjacket design and the desirability of later reprint editions and even American editions.

I mention jacket design because, in common with other Gollancz books of the era, the first editions of Price's novels up to 1977's War Game all sport those iconic yellow (or sometimes red) wrappers that so defined the look of Gollancz hardbacks for decades. For me, that's something of an issue, because while first editions are usually preferable, and the Gollancz jackets are certainly distinctive, taken together those seven books can tend toward the uniform. On top of that, these first editions aren't cheap. Unless you're prepared to put up with ex-library copies, prices range from around £30 at the low end to well over a hundred pounds for really nice copies. In other words, and to paraphrase Morrissey, largely beyond my slender means.

There is, however, another option – or more accurately, options. Many of Price's novels were published by Gollancz in hardback not once, but twice. Indeed, the earlier novels made it through three Gollancz hardback editions – and all three of them are rather hard to find. Let's take the second novel, 1971's The Alamut Ambush, as an example. 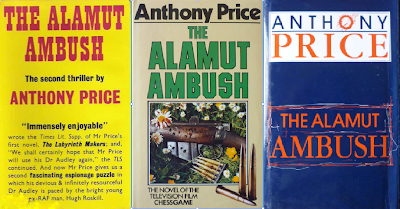 From left to right we have the 1971 Gollancz first edition hardback; the 1983 Gollancz second edition hardback; and the 1991 Gollancz third edition hardback. The first edition is pretty self-explanatory, but that '83 second edition bears further elucidation. The design of the jacket, by Brian Nicholls, ties in with the look of the Anthony Price novels that were newly published in hardback by Gollancz around this early- mid-80s period – Gunner Kelly (1983), Sion Crossing (1984) and Here Be Monsters (1985). But the reason The Alamut Ambush, and The Labyrinth Makers and the third novel, Colonel Butler's Wolf, were all reissued in hardback in 1983 was because that was the year ITV in the UK broadcast the six-episode television series Chessgame, an adaptation of the first three novels (sadly unavailable on DVD).

However, even though these and others of Price's early books have been through three Gollancz hardback editions, many of them are still hard to find in decent condition. To give you some idea of their scarcity, AbeBooks currently has only ten copies of The Alamut Ambush listed in any of these Gollancz editions. By far the most common is the 1971 first, with seven copies available, ranging from £15 to £200. But of those, four are ex-library, and the remaining three are the most expensive copies. As for the other three Gollancz hardbacks on AbeBooks, those are all the 1983 reissue. Of the further 1991 reissue, there is not a trace (my copy is an ex-library cheapo eBay win).

You might, at this point (if you're even still reading), be wondering why on earth I bought multiple copies of The Alamut Ambush – in total two copies of the 1983 edition and one of the 1991 reprint (the 1971 cover you can see above was "borrowed" off the internet). In truth, it was more by accident than design – and therein lies a small tale of woe.

See, I wasn't keen to pay though the nose for the book, so I bought that cheap ex-library copy of the '91 edition first, believing it to be the '83 edition. Once it arrived and I discovered it wasn't, I bought an equally cheap, similarly ex-library copy of the '83 printing to rectify the mistake. But then I read the novel and realised that the story has a particular association with the area of south east England in which I live and work, specifically the East Sussex South Downs. (I'll explore exactly what that association is in more depth in my review of the novel later this week.) So of course, inveterate collector that I am, I had to get myself a non-ex-library copy. And since first editions are somewhat out of my price range, I elected to procure another copy of the more reasonably priced '83 edition, the cover of which I prefer to the yellow first edition jacket anyway.

But there's more. Because once that second copy of the 1983 edition arrived, I noticed that, while on the surface the two books are indistinguishable – 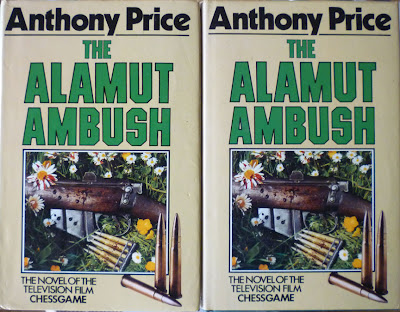 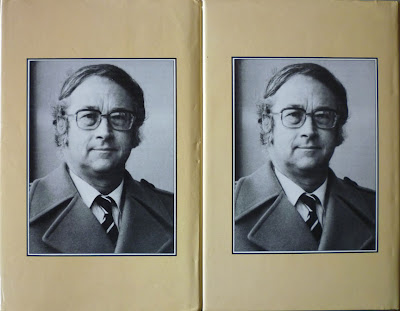 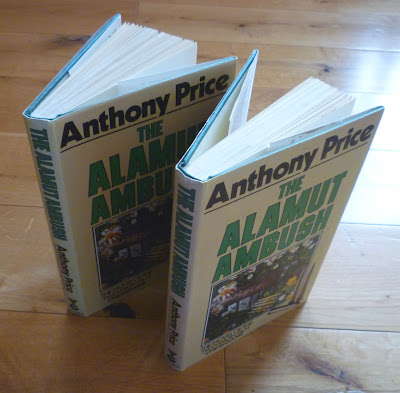 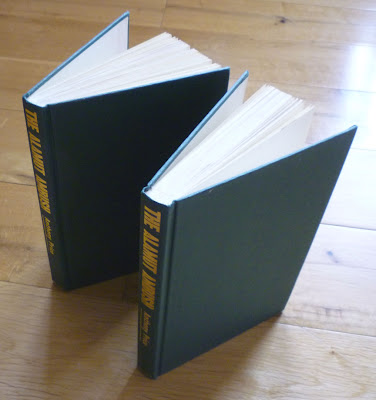 same jacket design, same case – internally there are definite differences between the two. If we take a look at the dustjacket flaps of the ex-library copy: 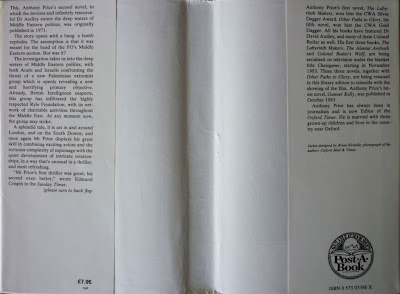 You'll see they bear a price on the front flap and a Post-a-Book logo and ISBN on the back one. But if we take a look at the flaps on the other copy: 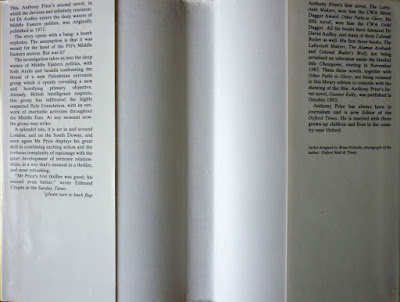 No price, no logo and no ISBN. Meanwhile, inside the book, there are differences between the two copyright pages as well. The ex-library copyright page looks like this: 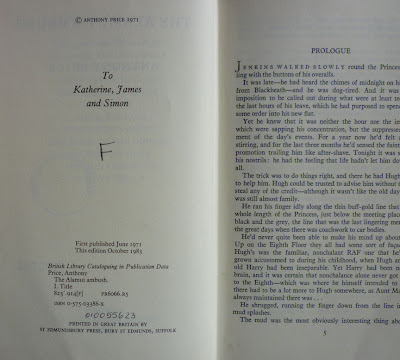 with the previous 1971 edition listed as "First published", and the new edition underneath it (ignore the penned "F" and library numbers). But the copyright page on the other copy looks like this: 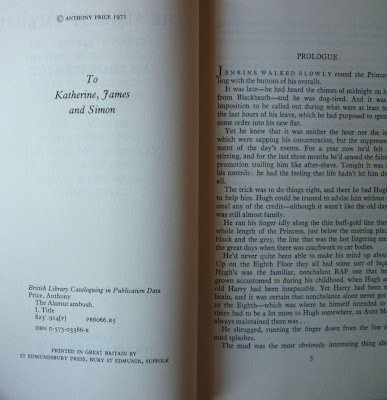 No mention of a previous edition – not even a mention of this edition. So while it's not ex-library, it's also evidently not precisely the same edition. Based on past evidence on Existential Ennui, previously at this point I'd have identified it as a book club edition and thrown my hands up in despair. But I don't think it is. I think it is, in fact, an export edition, intended for the American market, where, by 1983, the 1972 Doubleday hardback would have been long out of print and the next US edition, a Mysterious Press paperback, wouldn't arrive until 1986, leaving the American market open for British imports. Indeed, given its scarcity, it's not unreasonable to conjecture that almost all of the '83 Gollancz editions went to public lending libraries in the UK, and those that didn't were shipped off to the States (or not, as the case apparently is here).

Whatever the truth of the matter, there are so few copies of the '83 printing available, any copy is to be cherished – especially as The Alamut Ambush has that aforementioned South Downs significance.

All of which goes to illustrate the potential minefield – albeit an oddly enticing minefield; perhaps one where books spring unexpectedly out of the ground, rather than the more traditional kind where, y'know, you get your arms and legs blown off – awaiting those intent on collecting Mr. Price's books, which I offer up in the hope that prospective Price collectors can learn by my mistakes. And that's without even discussing the later Gollancz novels, where book club editions litter the market (and muddy the waters), or American editions (over half of which were published by Doubleday), many of which boast rather splendid dustjacket designs of their own:

Those are all matters for future posts, however. As it is I think I've tried the patience of anyone foolish enough to have made it this far quite enough already. So let's move right along to the reviews, starting with Price's brilliant 1970 debut, The Labyrinth Makers.

(NB: a two-part interview I conducted with Anthony Price can be found here and here.)
Posted by Nick Jones (Louis XIV, the Sun King) at 08:46